Experience the frenzied genius of Zeng Fanzhi in Untitled, on offer in the Hong Kong Contemporary Art Evening Sale on 9 July 2020. Featuring a lone figure enmeshed within his iconic luanbi landscape, the painting reveals Zeng Fanzhi’s accomplished technical virtuoso and his formulation of a wholly original and universal idiom reflective of the increasing speed of contemporary urban life.

Untitled reveals Zeng Fanzhi’s highly technical painterly genius and startlingly original articulation of the binary between abstraction and figuration. Featuring a solitary figure entangled within a theatrically lit enclosure brimming with frenetic vibrancy, the imposing work is a complex net of visual amalgamations that creates an almost vertiginous sense of velocity. The thrilling tension of branches and trunks is set against a faintly glowing background of electric royal blue, while at the centre, at the liminal space between the formed and unformed, a suited figure compels attention with his striking gaze. Catapulted into a complex infrastructure of light and dark, the viewer becomes part of a phantasmagorical composition that extends laterally beyond the work’s surface.

Embedded in the tumultuous experience of contemporary life, the present work is simultaneously a departure from, and an extension of, Zeng Fanzhi’s celebrated Meat and Mask series into the realm of landscape in which the transition between figuration and abstraction progressively blurs. In these works, Zeng Fanzhi offers a unique blending of his idiosyncratic intuition for color reminiscent of German Expressionist painting and his astute sense of history devolving the rich past of Chinese landscape painting into a powerful contemporary vision.

Zeng Fanzhi began experimenting with landscapes shortly after the turn of the millennium. Beginning with adding abstract lines to his masked portraits, Zeng adopted the luanbi (loose-brush) technique around 2002. The style evolved from a period during which Zeng injured his right hand; by experimenting with using his left hand to paint, Zeng developed his new method of expression of loose-brush lines or luanbi xiantiao. To create the enthralling contrast of thick impasto brushstrokes with fine, delicate lines, Zeng at times uses two brushes simultaneously: a large brush conceives the background with expressive strokes while a thinner brush composes the breached tree branches.

Zeng’s development of scouring and scraping his works, using a palette knife to drag and extend wet paint, gives the work a frantic, energetic nature. The automatic flow of his brushstrokes unleashes an aesthetic expression akin to the automatic drawings of the Surrealists who engaged with the idea of the subconscious to create new images and forms; while the profusion of paint dispersed across the picture plane recalls the influence of Jackson Pollock, who himself was influenced by the Surrealist’s concept of “psychic automatism”.


Positioned at the very forefront of Chinese contemporary art, Zeng has created one of the most fascinating bodies of work over the last twenty-five years. Growing up amidst the Cultural Revolution, Zeng rose to fame with the depiction of carnal bodies in hospitals and figures with masked faces. While these early works reveal the influence of German Expressionism, the later landscape series enters into a visual and intellectual dialogue with the Chinese past. The present work in particular combines many important elements of Chinese landscape painting from the Tang and Song Dynasty. While the Tang Dynasty was dominated by an exploration of monochromism versus polychromism as well as scrutinizing the significance of line and texture, the Song Dynasty was best known for its preoccupation with landscape at large and its connection to the human condition. By manipulating the oil paint with fingers and brushstrokes, Zeng not only demonstrates his mastery of technique but creates undulating lines of immediate expressiveness and lyrical power that echo the historical relevance of landscape painting.

Translating his cultural heritage into the present, Zeng formulated a universal idiom reflective of the increasing speed of modern urban life juxtaposed with a nostalgic longing for pure nature that culminates in a dark and mysterious, almost apocalyptic vision. The natural organic flow of the lines in the present work creates new dichotomies of revealing and concealing, representing and abstracting, displaying more ambiguity than providing definite solutions. On the other hand, the figure embedded and melded within the abstracted landscape speaks to a poignant union of the abstract and the figurative, the personal and universal, the real and unreal.

“The power of Zeng Fanzhi’s work stems from this abstraction, from this way of showing an image and, as it evolves, the unreality of its foundations.” 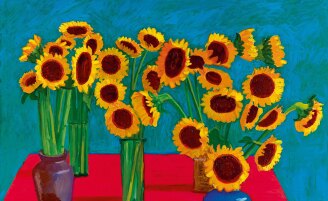