One of the most intriguing highlights of the upcoming auction of Important Watches (Geneva, 13 May) is a remarkable enamel and pearl double-bladed musical fruit knife, made in the early 19th century. Only three double-bladed examples of these rare treasures are known, and this is the last of these still in private hands.


The knife was designed for cutting both fruit and flowers and each of the blades – one gold and the other steel – was intended to perform just one of these tasks. The correct usage of each blade can be determined by examining the designs on each side of the knife’s handle. The gold blade corresponds to an assortment of fruit, while the steel blade is accompanied by a bouquet of flowers. Unlike steel, gold is not affected by the corrosive effects of fruit juice, which makes it a much better candidate for cutting fruit. However, given the near-pristine condition of the piece, it is probably fair to say that it was designed primarily as an object of conspicuous consumption, rather than for any truly practical purpose.

The technology that made the miniaturisation of musical mechanisms possible, such as the one used this knife, was developed by Swiss watchmaker Antoine Favre in 1796. This method is apparently characteristic of double-bladed knives, as simpler single-bladed knives tend to operate a similarly simple system for winding. The knife in this sale is still fully functional and in an excellent state of preservation.

Luxurious miniature novelties like this knife became exceedingly popular during the late 18th century, and appealed greatly to the Chinese Market. The Emperor of China and his court had long been as fascinated by European mechanical novelties as the Europeans were by Chinese works of art. For example, in 1600 the Jesuit priest Matthew Ricci was permitted to enter the Forbidden City with gifts of chiming clocks for the Emperor. The Portuguese trading port of Macao was founded in 1514, and warehouses established by European merchant companies in Hong Kong solidified a strong platform for trade with the Chinese Market through Canton. 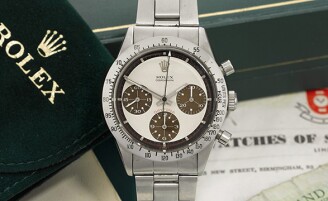