Absence Makes the Heart Grow Fonder: A Double Portrait from the Gallery of Rafael Valls

T his phrase seems more apt than ever at a time of separation from friends and loved ones. It expresses the feeling of affection between those who are apart. A line from the song The Isle of Beauty by the English poet and songwriter Thomas Haynes Bayly (1797–1839) evokes this idea:

"What would not I give to wander Where my old companions dwell, Absence makes the heart grow fonder, Isle of Beauty, fare thee well!"

Although the expression is found much earlier in Francis Davison’s Poetical Rhapsody (1602) and in other seventeenth-century writings, its roots go back to the Roman poet Sextus’ Elegies: ‘Always toward absent lovers love's tide stronger flows’.

This seventeenth-century double portrait, inventive and unusual in its design, evokes that very idea. An elegantly dressed gentleman stands beside a framed portrait of a lady. Posing confidently, with hand on hip to show off to maximum effect the sheen of his satin sleeve, he draws back a curtain to reveal a portrait of a fine lady in pearls, perhaps his wife. The conceit of including a portrait within a portrait is relatively rare. It features in betrothal portraits or as a device to allude to someone recently deceased. In this case the man’s jovial expression suggests happier circumstances. The folded letter at the lower right probably once identified him and perhaps the painter too. The name ‘Cesare’ is legible, although the rest of the inscription is tantalizingly indistinct.

Separated if not by death then by geography or circumstance, the couple in this arresting work was painted to commemorate the bond that existed between them. The artist, whose identity is not known, has given pictorial form to the idea that although the lady is not present, her image fills his mind. By displaying a portrait of his beloved, the man declares his affection for her.

This is a painting that plays with pictorial fiction. There’s a theatrical quality to the figures’ presentation, as the doubling of pulled-back curtains creates a multi-layered image. Looking at the shimmering turquoise of the velvet curtain fringed with gold braiding, one might wonder about the times when the lady is screened from view, when the gentleman’s attentions are directed elsewhere... After all, the curtain, when drawn, might serve the opposite end: out of sight, out of mind.

How to Start an Old Masters Collection 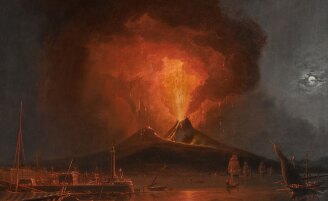