A Wine Collection Unearthed from a Secret Grotto

Wine specialist James Reed discusses a remarkable collection of wine from our upcoming auction in London, which was stored in a secret grotto carved out from the base of a cliff. To see the full catalogue and register to bid, click here.

One of the joys of being a wine specialist is being admitted to all the different places where clients store their wine. Beyond the normal subterranean cellar with a few crumbling shelves and a single naked bulb, I have hauled wine out from under a full-size ballroom, visited sepulchral vaulted chambers in stately homes, and even been ushered into a very atmospheric bunker, hidden in woodland, that dates from the First World War. Once I was led to an innocuous looking shed at the bottom of a garden. Between the lawnmower and a set of bikes was an old rug, under which was hidden the entrance to a wine vault. The man was clearly an Enid Blyton fan.

This collection is, however, the first I have ever found in a grotto. The vendor, a retired lady with a very engaging manner and an inexhaustible fund of energy, had given me explicit instructions, as well as a map, indicating exactly where I would find it. I still struggled. It was located in a particularly beautiful region, and the entrance itself is at the foot of a sheer rock face. Once inside, my colleagues and I were confronted by a bare rock cavern, the walls clearly showing the pick marks, with smaller chambers branching off at random. Underfoot was bare earth.

Scattered about were pallets of wine, plastic wrapped against the damp, neatly and methodically stacked and with the case ends facing outwards to aid identification. It quickly became clear that the vendor knew exactly where every case was. She was justifiably proud of her collection.

The vast majority was bought from a handful of reputable Continental wine merchants, and the collection has benefitted from long-term storage in its present location. The owner had started buying seriously with the 1990 vintage, and four of the five First Growths are presented here, not forgetting blockbusters from the 1982 and 1989 vintages.

THE PATH TO THE GROTTO

There are other offerings from the 1990s and the quantities available increase sharply with the 1999 and 2000 vintages. It is here that we see the parcels start to creep in, and by now, the quantities are generally full cases. The seam of 1st Growths continues, through vintage after vintage, together with outcrops of Super-Seconds: Léoville Lascases, Pichon Lalande, Cos, Montrose, and – if you will allow me – Ausone, Cheval Blanc and Petrus from the Right Bank.

Highly affordable red Bordeaux is available in the shape of parcels of Roc de Cambes. Also present in large quantities is Le Tertre Roteboeuf, described by Serena Sutcliffe, MW as “The miracle St Emilion gem.” There are large formats, especially in the 2000 vintage, mostly magnums but also some double magnums of Mouton Rothschild. Further afield is a drop or two of White Bordeaux, as well as some Red Burgundy, rarely-seen-at-auction Condrieu Luminescence from Guigal, Gaja and Sassicaia from Italy, and a smattering from the New World.

We are delighted to be able to present such a glorious collection from such great storage and with such strong provenance. 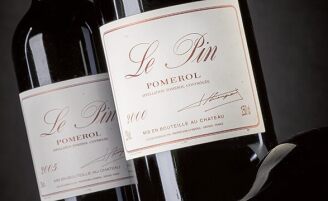 Past Auction
A Great Collection from a Secret Grotto from a Northern European Connoisseur
24 January 2018 | 10:30 AM GMT | London