A Stitch in Time: Ai Weiwei Collaborates with Prisoners on their Journey to Rehabilitation

T he charity Fine Cell Work today embarks upon, Human Touch, a selling exhibition at Sotheby’s New Bond Street Galleries, spearheaded by Cath Kidston OBE, and the latest in a series of projects by the charity. Founded by the late Lady Anne Tree over twenty years ago, the charity and social enterprise enables prisoners to build independent, crime-free lives post release. The exhibition marks the culmination of a project which joins contemporary artists and prisoners across Britain, for whom the project provides a vital lifeline for those aiming to leave a troubled past through a journey of creative expression.

Fine Cell Work is a cause very close to Ai Weiwei as he had been incarcerated himself. The 2x2.4 metre Odyssey in Quilting was intricately stitched by a group of 13 highly-skilled stitchers in eight prisons across the country, in close collaboration with the artist. The human rights of prisoners remains an extremely important issue for Ai Weiwei.

In 2017, the artist visited over 40 refugee camps around the world. The resulting installation, Law of the Journey, saw him suspend a 60-metre long rubber boat filled with hundreds of figures in the National Gallery in Prague. He explained: “there’s no refugee crisis, but only human crisis… in dealing with refugees we’ve lost our very basic values”

The piece demonstrates not only a spirit of collaboration but the positive impact of social enterprise in the wider community. After several months of meticulous work, Ai Weiwei concluded;

“Finally, you reach the point when I would say it is perfect. There is so much language in between, it does not show on the work the communication, trust and understanding of the process and joy of making pieces like this. I think the final resulting piece is a beautiful art work.”

The Ai Weiwei quilt is joined by unique works by several other leading artists in the exhibition: Idris Khan, Annie Morris and Cornelia Parker. Wolfgang Tillmans recreated his No man is an island design for a pro EU/anti Brexit campaign poster on a needlepoint cushion. Carolina Mazzolari’s Void — a hand-stitched wool wall hanging, explores the artist’s recurring themes of memory, loss, intuition and love. Also in the exhibition, Bob and Robert Smith’s Art Makes People Powerful, uses a trademark text-based slogan to make a bold statement and empower the work’s creators.

Watch the making of Odyssey in Quilting

Stitcher Ben, who worked on five panels of the Ai Weiwei quilt said: “The sections took over 200 hours to complete. Being able to be part of this project has been an honour and an achievement for myself. For this piece of work to be allowed to be stitched by people who have their own battles and struggles truly shows what this piece is about.”

To view the works in more detail and to bid, click here. 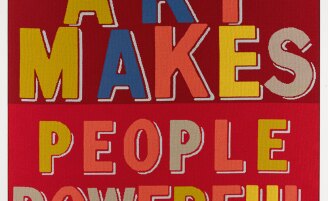