A Mysterious Carnival in a Silver Carriage

By Sotheby's
Sotheby's Collections sale in Paris on 27 November features a magnificent, and mysterious silver carriage , whose precise meaning still eludes us to this day. Read on to discover more.

T he meaning of this marvellous carriage drawn by four prancing horses remains mysterious. In addition to the coachman on his projecting seat driving his horses at a furious pace, each of the five passengers is behaving oddly.

The man seated on a throne in the back of the coach is cracking his whip though the horses are out of reach, instead his fellow men are at its mercy. To his proper right a man ruthlessly beats his bowed victim with a long stick, on the other side a man steps on top of a barrel and brandishes a flask of wine, while the last passenger is madly attempting to jump off the carriage, which is travelling at top speed.

All the characters are wearing masks and making maniacal faces with exaggerated, almost frightening, smiles. They are dressed in clothes that evoke carnival characters or Commedia dell’Arte. The coachman wears a kind of jester’s hat and the other passengers oriental turbans adorned with long plumes. The addition of pearls, turquoises and polychrome glass cabochons on the costumes and on the horses makes the scene even more dazzling and magical.

Troops of playful monkeys embarked alongside their human stooges are mimicking their ill behaviours. Could this carriage embody a satirical depiction of the vices in a corrupted society? Could it be a miniaturised float parading in a carnival? Could it be a free interpretation of a scene from the Commedia dell’arte? One can see some similarities between the character of the Jester (or possibly Harlequin) and the coachman with his fancy hat; between the innkeeper Brighella and the man holding a flask of wine; between Il Capitano and the authoritative man yelling and cracking his whip from the back of the carriage and between the quarrelsome Scaramouche and the man beating the unfortunate whipping boy, himself comparable with the character of Pagliaccio.

Contrary to all expectations, the inscription in the cartouche surmounted by a monkey on the back of the carriage does not unveil the mysterious meaning of this fantastic ride. Who could be the Emperor of the Day? Does Lucagnola da Iesui refer to the name of the silversmith who designed and made this incredible carnival like float? Is Rialto referring to the famous bridge in Venice?

Could we imagine a political satire hidden behind this enigmatic inscription? A pamphlet on the Austrian Empire in the wake of the Third Italian War of Independence with the Kingdom of Italy which ended in August 1866 with the Austrian defeat and the retrocession of Venetia to Italy? And how should we read this whimsical date in Roman numbers? To this day, this amazing carriage tightly holds onto its secrets, but rides away with our imagination. 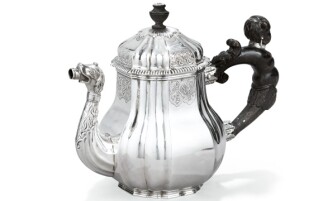