A Lifetime of Memorabilia: The Story of Porsche Told Through Artifacts

By Forest Casey
A comprehensive collection of Porsche memorabilia, meticulously maintained over decades, paints a picture of a company dedicated to quality no matter the product.

T hough it may appear to be a logical leap, one can learn quite a bit about a car company by how it promotes itself. From the banners announcing motorsport victories in dealer showrooms to the iconic posters hung up on childhood bedroom walls, the advertising, marketing and graphic design divisions of major automakers shape how we perceive their products.

Some companies are more adept at this than others. For an automaker with a somewhat spartan reputation, Porsche’s marketing and promotional materials have been uncharacteristically colorful since the beginning. Whether the item in question was a silk scarf or a spare parts list, Porsche designers applied equal effort, elevating what would be mere “tchotchkes” to other companies to true collectible status. 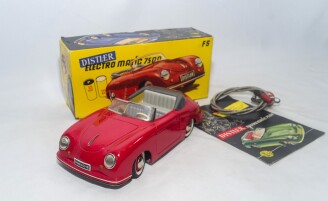 Curated over a lifetime, this collection of Porsche artifacts is so encyclopedic, RM Sotheby’s plans to split the auction into two separate two-day events. Surveying the 450+ lots – some of which themselves include dozens of items – one begins to appreciate the evolution of the Porsche brand. Here are some of our favorites from an unforgettable exhibition of memorabilia:


The titanium weave on this Porsche Design pen resembles a child’s finger trap; pressing down the “cap” on one end causes the entire weave to open. Despite its unidirectional malleability, the pen (strike that: ‘writing tool’) retains exceptional rigidity yet still feels light in the hand due to the exotic materials used to make it. The GT3RS version of your typical ballpoint.

Designed by Makio Hasuike, who briefly worked for Seiko before establishing his own firm in Milan, this handsome, transparent case appears to be transported directly out of the 1980s via time machine. Containing exact samples of the factory-correct paint and interior options – from still-plush carpet swatches to leather samples in every grain and dye imaginable – this comprehensive three-ring booklet is ideal for anyone restoring a car from that particular vintage who wants it to be as factory-correct as possible.

For a fun game, show this item to the biggest Porschephile you know and ask them how this rare factory option for the 356 was originally used. You will likely receive guesses of sporting goods ranging from rock climbing aids to telescoping ski poles and fencing foils, but this rare Porsche accessory was made for the noble sport of Polo – not for playing, but for watching. Polo fields are expansive; grandstands are rare – this transformable field seat offered 356 owners the chance to view the action in relative comfort. This novel flat-folding seat is still sturdy and shows minimal signs of use.


These colorful kiosks were factory gifts and are wrapped in some of the most iconic Porsche poster designs from the 1950s. 1959 was the 50th anniversary of Porsche as an engineering firm, so certainly there was much cause for celebration even one year later. Though these containers were thought by some to be merely the wrapping around the present, early Porsche collectors knew they were worth saving. These wine containers would fit in perfectly on a mid-century-style countertop today – and nobody would have to know if they concealed a more contemporary vintage.


To quickly illustrate the evolution in Porsche promotional materials, simply observe the difference between the previous lot, which wrapped a wine bottle in Porsche motorsports posters, with this one – a bored-out Porsche Mahle cylinder that not only conceals your champagne but keeps it cold, too. Functional and decorative all at once.

Everyone has a different definition of “bringing out the fine china,” but for a truly special occasion for the Porschephile, this pristine set of Porsche place settings would make the backdrop of a most memorable meal. Still wrapped in their original plastic, these linen placemats retain their colorful 1960s-era pop, with stylized illustrations of 356 Speedsters and sport coupes and their lucky owners vacationing in the European countryside, Alpine ski resorts, and sunlit beaches overlooking the Mediterranean. It’s a glorious glimpse at a bygone age. On second thought, maybe skip using them for dinner – one wouldn’t want to spill soup on such a carefully-preserved piece of art.

For the best way to view this positively joyful series of mid-century Porsche art, you have to view it in its original medium – handpainted on ceramic. These German-made commemorative plates were more intended for display rather than dining. The twin holes built into the base rim of the plates were made to make frame-free hanging easy, a quick way to add excitement to any dining room.

The ultimate accessory for the stylish Porschephile, these silk scarves are delicately woven and stitched, with virtually no signs of wear. The vibrant colors of the dyes used to make these gorgeous pieces have not dulled with age. The rough sketches of some of the greatest Porsche engineering projects ever built provide the decoration, while a trio of off-center ‘PORSCHE’ logotypes in the center creates a unique pattern no matter how it is worn.

With their friendly faces and “bathtub”-style bodies, the Porsche 356 became a blank canvas for toymakers to experiment. This auction features an extensive listing of 356 toys, including ‘Polizei’-style cruisers, hand-wound and battery-operated models, “piggy” banks, and DIY models, but the Auto Fox has to be the most unique of all. Pressing the red button on the detachable remote causes the 356’s passenger – an adorable creature – to thrust its head out of the window and stick out its tongue to all of the other toys on the road. Perhaps the most amusing lot of all.

The pinnacle of Porsche toys has long been considered to be manufactured by Nuremberg-based Johann Distler KG. Before production ceased in 1962, Distler’s flagship model was the Electromatic 7500, styled to resemble a 356 cabriolet, offered in an array of colors including the ever-desirable ‘Polizei’ livery. With remote control operation, its batteries concealed between a folded tonneau cover, the Distler toys were known for their attention to detail – even including a leather-wrapped key holder embossed with the Shell oil logo. The rarest among these featured ’PORSCHE’ license plates and were sold exclusively through the gift shop at the Porsche museum. Almost too good to play with.

Though the purpose of this article was to highlight three-dimensional works, any auction of Porsche literature is going to feature several lots of printed press releases. Presented in a neat folder colored a similar hue of oxblood red, these materials were issued to automotive journalists at major car debuts. Because the Panamericana was built as a present in honor of Ferdinand Porsche’s 80th birthday, the typical sales language included was unnecessary – attendees of the 1989 Frankfurt Auto Show, where Panamericana debuted, instead received a scale model of the innovative, open-air concept car.

Another red folder, this one with a fascinating alternate history for any military buff. Porsche designed their Type 597 to have exceptional off-road abilities – the prototypes proved so capable, the company decided to offer the design to the U.S. Army. This secret proposal was referred to the Commanding General of the Army’s Ordnance Arsenal in Centerline, Michigan on 31 March 1960, and was concurrently shared with the Army. The procurement committee ultimately denied Porsche’s proposal, and the information binder later fell into private hands. Complete with blueprints and period photographs of the Porsche four-wheel-drive system installed in a Volkswagen Type 2 bus summiting a steep grade, this lot is a fascinating glimpse at what might have been and proves that one can’t judge a book by its cover.


Known for significantly increasing the value of the car they accompany, original factory tool rolls have become collector items in and of themselves. Unwrapping these leather-wrapped kits reveals why – each tool roll is almost a miniature museum of period-correct components, including Bosch spark plugs, fuel pump repair kits, and OEM valve stems. Some kits even included DC-powered accessory lights to make nighttime repairs possible. Essential to complete any Porsche 356.


Factory-branded apparel can sometimes lack in quality, but for Porsche’s own pit crew, the brand spared no expense. This colorful logo-ed down jacket has a subtle roll collar and a special feature in the right chest pocket – a see-through credential holder on an elastic strap, making entering and exiting the pits a bit less laborious.

A Man and His Ideas, Ferdinand Porsche Press Kit, ca. 1977

Another birthday present honoring Ferdinand Porsche, this was distributed to a small batch of dedicated Porsche enthusiasts and automotive journalists in 1977. Those lucky enough to receive one of these special packages could open the kit to reveal three Porsche posters and a blank notebook – presumably to fill with one’s own ideas. Though it would be difficult to surpass a true innovator like Prof. Porsche, the accompanying notebook is blank, ready to hold the ideas of its next owner.