A Dazzling Display of Art in Instanbul

By Roxane Zand
They say to die happy, a man’s last glimpse should be of Istanbul. I would not disagree.

A fter a period of stagnation, and despite government crackdowns on freedom of expression, the art and culture scene in Istanbul is once again booming and billions of dollars are being invested in new museums. To showcase this growth, Sept 9-16 was a week of frenetic cultural activity which began with private parties, previews and guided tours of what was veritably a smorgasbord of offerings. True to its promise, the Istanbul art week dazzled, provoked, and enlightened.

Nicolas Bourriaud, curator of the 16th Istanbul Biennal (supported by Koc Holdings) entitled The Seventh Continent, says the following in his interview with art blogger Judith Benhamou-huet : “There is a whole continent, a huge mass of plastic drifting away in the ocean, five times the size of Turkey. This is a world which we do not want to inhabit - the continent of our shame, our guilt. “ He believes the understanding of this phenomenon needs anthropologists and explorers; and to him, the artists are these anthropologists. Fifty-six were therefore selected from diverse practices and backgrounds to address this urgent theme, sometimes unearthing deeply emotional responses, other times pointing a cold finger. The contradictions and challenges do not escape notice, and when all is done and told a coherent message emerges about the Anthropocene, its relationship to contemporary art, and our collective plight. Held across several venues - from the Pera Museum to Büyükada (Island in the Sea of Marmara), and the Antrepo 5, there were multiple diversities of perspectives and statements.

A momentous event, the opening of the new Arter building in Dolapdere, also marked a highlight of this week of culture. In its new home, Arter will be a sustainable, vibrant cultural hub, making a broad range of programmes accessible to everyone. Exceptionally well-designed on six floors by Grimshaw architects and with a highly professional installation of its maiden exhibition, the museum occupies an indoor space of 18,000 m2. There were seven exhibitions in total, four of them drawn from its collection that comprises more than 1,300 works as of 2019. The collection- based group show entitled ‘What Time is It’? was curated by Emre Baykal and Eda Berkmen, and formed around the concepts of memory, time and space. ‘Words Are Very Unnecessary’ was another collection- based show, as was the Altan Gurman retrospective. Erkmen’s specially produced pieces for her show Whitish were particularly eye-catching, and other films and installations made up an overall series of significant artworks. With an excellent bookshop, there is no doubt that the new Arter will prove to be an exceptional addition to Istanbul’s cultural landscape, and one which will draw locals and visitors alike. After all, Istanbul with its rich heritage has always been a major tourist destination; why should it not now become an art hub as well?

The culmination of this week of activity was the Biennal party on Sept 14 hosted by Omer Koc at the Abdul Mecid Effendi Mansion which was one of the former Sultan’s hunting lodges. A stunning venue, it showcased a superb selection from the Koc collection in a witty, insightful show aptly titled The Child Within Me. Pointing to the necessity for childish imagination in our lives, artworks dotted the spectacular setting in clever, charming ways to instigate wonder and awe. The evening imparted a real sense of magic and playfulness, confirming Nietzsche’s quote that ‘man’s maturity consists in having found again the seriousness one had as a child, at play!’ 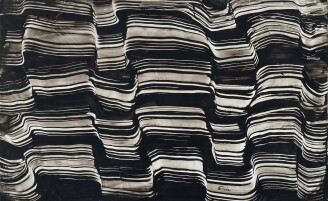