A Completeness of Opposites: The Art of Tess Jaray

I n the preface to her 2010 collection of writings, Painting: Mysteries & Confessions, Tess Jaray reflected on her enduring fascination with the ‘patterns and repetition in nature and in art.’ She described her approach as ‘a coming together of the head and the heart’ and the need for ‘the merging of inside and outside, distance and closeness, a marriage, a completeness of opposites.’ Jaray’s career-long investigation into this liminal space has led to an extensive body of work of unflinching quality and poise: her significant contribution spans painting, drawing and printmaking and includes major commissions to redesign large public spaces. Ahead of the upcoming exhibition at S|, we take a closer look at the life and work of Tess Jaray.

Jaray was born in Vienna in 1937 to creative, unconventional parents. Her father was an inventor, her grandfather an art collector, and her aunt, Leah Bondi Jaray, had founded Würtle Gallery, which championed the work of major expressionist artists including Oskar Kokoschka, Emil Nolde and Egon Schiele. In 1938, with the threat of war and persecution becoming more and more ominous, her parents abandoned everything and embarked on a risky journey across Europe with their infant daughter. The Jarays eventually settled in rural Worcestershire and in 1942 purchased an old cottage with a large garden.  Here, life assumed a different pace. This quiet, verdant sanctuary was surrounded by fields, neat hedgerows and orchards planted with geometric discipline. As a child Jaray would explore the countryside on foot or on her bicycle; in the evenings she would draw the landscape from memory. This was a coexistence of nature and art, freedom and order, a model that was to stay with her for the rest of her life.

Jaray knew from an early age that she wanted to become an artist. Considering artists to be ‘of the city’, Jaray moved to London at the age of sixteen to attend St. Martin’s School of Art in London (1954-57) before continuing her studies at the Slade School of Fine Art (1957-60). Although she experimented with abstract expressionist techniques, her true direction did not emerge until after art school. Travel played a significant role in the formation of Jaray’s artistic identity. In 1957, she returned to Vienna with her parents, their first trip since fleeing in 1938. Here she experienced Viennese culture and architecture first-hand, including the gothic splendour of St. Stephen’s Cathedral. In 1960, Jaray was awarded a scholarship to make a ‘grand tour’ of Rome, Florence, Sienna and Venice: the transcendent void spaces found within early renaissance painting and architecture became an instant source of fascination.

Following several months in Paris in 1961, Jaray returned to London, eager to find ways to transform her experiences into new work. The expressionist gestures of her earlier work no longer felt right and Jaray realised that she needed to revolutionise her entire approach. Palace Green and Palace Red (1962) are fine examples of Jaray’s new approach; their titles hint at a type of grand architecture rather than a specific place. These paintings herald the introduction of a number of core tendencies, many of which have remained with Jaray ever since.

Throughout this early 1960s, Jaray often created works in pairs. The artist reflected recently that this was an intuitive process possibly emerging from a desire to revisit a particular idea, with two canvases adding up to more than a single permutation could; it may also stem from Jaray’s interest in ‘the completeness of opposites’.  Another pair, Castle Blue and Castle Green (1962) convey a sense of fortification through the symmetrical arrangement of upright rectangles to create the impression of a concave or a convex screen. Domed forms are developed and explored in Cupola Blue and Cupola Green (1963), where a series of symmetrical, radiating rhomboids creates an increased illusion of depth. Cupola Green marks a further breakthrough, dispensing altogether with the shallow frame of previous works, enabling the viewer complete access into the mysterious space of the painting. All of these works were included in Jaray’s first solo exhibition at the Grabowski Gallery, London in 1963.

A new landscape orientation in Jaray’s work was introduced with Garden of Anna (1966), and this wider perspective was adopted and extended in Rialto (1966). The sheer breadth of this canvas brings to mind the majestic span of Venice's iconic bridge. The wide composition emerged through preparatory drawings, with points of geometry determining the ultimate format of the work. Rialto shares compositional similarities with the mural that Jaray was commissioned to produce for the British Pavilion at Montreal’s Exposition 67. Measuring 10 by 40 feet, this epic work complemented the long and narrow layout of the space. As Jaray explained: ‘The final design, changes as one walks along it. From the side the directions clarify — like the skull in Holbein’s Ambassadors — and each area moves and changes and in turn becomes part of the next.’ The Montreal mural was a mature, confident and ambitious painting, embracing site and context and anticipating the large-scale public commissions that Jaray would undertake in the 1980s and 1990s.

Artist and writer, Eddie Wolfram, commented in 1967: ‘I dare the opinion that Tess Jaray is rare: she is that hard to define phenomenon’. Jaray was not without her supporters – patronage came in the form of various exhibition and commission opportunities, acquisitions to important collections, and respected teaching positions – yet it is perhaps the hard-to-pigeonhole nature of Jaray’s art that has muted her presence within the annals of 1960s art.

Jaray reflected recently on her training at the Slade where she was taught to strive for quality rather than success, and this maxim made a lasting impression on her, the motivation for quality evident in Jaray’s early work has never subsided. As for ‘the completeness of opposites’, Jaray acknowledged recently that she has the misfortune of always seeing both sides in an argument. The benefit of sitting on the fence, of course, is that the view is far more interesting from up there.

This article has been adapted from a longer essay by Natalie Rudd. 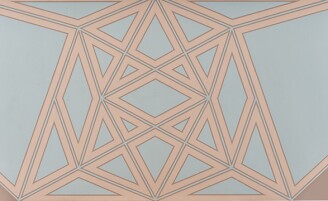