A Collector’s Passion for Tiffany Masterworks: “I Knew I Had to Have Them”

By William A. Richardson

New York – “I have always been a collector,” says William A Richardson. Growing up in Nevada, the Las Vegas-based real estate executive began acquiring coins and currency at a young age, and over the years has turned to other collecting categories such as wine, fine art and, most notably, masterworks by Tiffany Studios. Sotheby's is honoured to present a sale of 42 pieces from Richardson’s unparalleled collection. Ahead of the 13 December auction, Richardson recalls a lifetime of collecting and his passion for Tiffany.

I started collecting silver dollars when I was thirteen. My grandparents Will and Levy Beckley were early settlers of Las Vegas, arriving in 1907. Whenever I visited them, my grandfather would let me take two silver dollars from his dresser drawer. Some dated from the 1880s. I didn’t understand why coins struck in the 1880s were still in general circulation in the 1960s. I reasoned that anything that old must be valuable. Over the years I acquired and sold several significant “hoards” as coin people like to call them.

The leap from coins to Tiffany was not a big one. Many coin collectors also appreciate decorative arts and jewellery. I was always fascinated by the incredible workmanship of Tiffany – beautiful objects that are still usable and timeless today. I collected coins I thought  were special and I began collecting Tiffany with the same passion after a friend took me to a Tiffany auction preview in the early 2000s. Upon seeing the stunning objects in person, I knew I had to have them.

At first, all I bought were lamps – floor lamps, table lamps, chandeliers. Over time, I branched out into windows, vases, desk sets and other objects. I never concentrated on one particular motif – dragonflies, peonies, poppies, geometrics – I just wanted the highest quality items.

My first Tiffany acquisition was the Hanging Head 'Dragonfly' floor lamp. This particular piece is very unusual due to the beautiful blues of the glass. I have not seen another example that comes close to its radiance and quality.

Although I pursued items that were considered the very best in their category, I only purchased the ones I felt were beautiful in their own right. I am especially fond  of both the 'Magnolia' and 'Snowball' floor lamps, but my favourite is the 'Wisteria' lamp. Its complex pattern and cascade of colour is magical. How did it end up where it was discovered, sitting on a TV table in a trailer in Colorado? It was uncovering fascinating histories and striking gold with an incredible piece that made collecting Tiffany so exciting.

Eventually, I acquired so many lamps and other objects that I could no longer integrate them into my home. I built a separate room specifically designed to showcase these unique and magnificent pieces in their best light and form.

Click here to preview highlights from Masterworks by Tiffany Studios: The William A Richardson Collection: 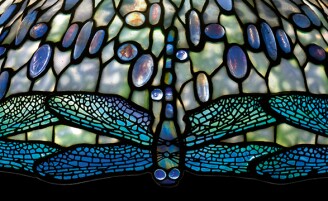