A Bamboo Masterpiece Worth More than 'Ingots of Foreign Gold'

Bamboo paintings by the celebrated Ming dynasty master Xia Chang (1388-1470) were highly sought-after both within China and beyond during that period in history – so much so, that it was said not even “ten ingots of gold from Xiliang” could compare in value with a single bamboo painted by the artist. Xiliang refers to a non-Chinese nation bordering the Ming dynasty empire, from which ten gold ingots represent an exorbitant sum. It attests to the extraordinary worth of Xia Chang's paintings that even the least among them would be held as a veritable treasure.

T he forthcoming Fine Classical Chinese Paintings sale (9 July, Hong Kong) features Ink Bamboo, a pair of large hanging scrolls that's notable not only for this rare format of Xia Chang's works, but also because they depict bamboo under multiple movements. To appreciate the importance of the work fully, it is worthwhile to place it within the context of bamboo paintings and its long tradition in China.

Throughout the history of Chinese painting, the bamboo has been singularly esteemed by the literati. The plant’s form and spirit embodied the gentlemanly virtues of uprightness and integrity, and so scholars strived to capture the essence of this metaphorical paragon of Chinese philosophy. Xia Chang is indisputably the most esteemed Ming dynasty master renowned for his paintings of bamboo.

Beginning with bamboo paintings by Wen Tong (1019–1079) from the Northern Song dynasty, the art continued in a long lineage with such masters as Wu Zhen (1280–1354), Li Kan (1206–1368) and Ke Jiusi (1290–1343) from the Yuan dynasty, followed by Xia Chang of the Ming dynasty, and Zheng Banqiao (1693–1765) in Qing dynasty. Having written extensively about the art and appreciation of bamboo, Song dynasty literary giant Su Shi (1037–1101) expressed the view that the painter’s mind and hand must correspond seamlessly. During the process of editing the distinguished work Zhupu Xianglu (Bamboo Records), Yuan dynasty’s Li Kan traveled throughout the land to observe bamboo plants in all their variety, even journeying to remote areas and discovering secluded pockets of untouched beauty.

Xia Chang, also known as Yufeng and Zizai Jushi, was born in Kunshan, located in today's southeastern province of Jiangsu. At birth he was given the name Zhu Chang, and his courtesy name was Zhongzhao. In 1415 during the Yongle Emperor’s reign, he passed the imperial examination and began serving at the governmental administrative institution Hanlin Academy. He was also an expert in regular script calligraphy. He subsequently served in a number of prominent positions, including Minister of Court of Imperial Sacrifices, during the later Yongle (1403–1424) and Xuande (1426-1435) reigns. In 1457, during the first year of the Ming Tianshun reign (1457–1464), Xia retired and returned to Suzhou, devoting himself to the pursuit of painting and calligraphy. Both he and his older brother, Xia Bing, had assumed the senior official position of Secretary to the Emperor. One of Xia Chang’s granddaughters married renowned literati scholar Wen Zhengming (1470–1559) while another was grandmother of Gui Youguang (1507–1571), also an accomplished literatus.

The pair of extremely large hanging scrolls depict both the stillness and movement of bamboo. In stillness, the bamboo plant expresses the uplift of a spring breeze. In motion, the plant sways and dances with the wind.

In his paintings, Xia clearly expresses the deep influence of masters of the Song and Yuan dynasties. Combined with his own insights and observations of bamboo plants in nature, the artist applied ink exclusively to depict bamboo in xieyi (expressive freehand) style, ultimately developing a unique approach of his own.

Xia Chang was described as a person who was “honest and spoke from his heart, unencumbered by extraneous details.” The artist’s character certainly shines through in his works. Xia Chang’s ink paintings of bamboo subjects followed a distinguished tradition and have inspired many subsequent generations.

The pair of extremely large hanging scrolls in the present lot depicts both the stillness and movement of bamboo. In stillness, the bamboo plant reveals a joy, akin the experience of a gentle breeze in springtime. In motion, the plant sways rhythmically, as it if were dancing with the wind. The minimal and the intricate are set together, complementing the other in an elegant union. The rhythm of the ink is vivid, full of vitality.

The work was signed Xia Chang Zhongzhao twice, with one seal of the artist and three illegible seals.

Qing dynasty scholar Lu Shihua (1714–1779) embarked on a search for masterpieces in Wuyue, a state that now covers modern Zhejiang Province, and documented his journey in Wuyue Suojian Shuhua Lu (Record of Calligraphy and Painting Seen in the Wu and Yue Regions). In this work, Lu included a Xia Chang painting which bore an inscription resembling that of the present lot.

Evidence suggests that the scrolls were held in Japan, as the inscription on the titleslip of the present lot stated restoration work being performed during the Hinoeuma year (corresponding to 1846), hence the third year of the Koka era. With the evidence that the rare Ming dynasty scrolls had remained and even undergone restoration in Japan, the present lot represents a fine example of the gu du or kowatari (literally, "old migration") of painting, calligraphy and objets d’art that were imported before the 17th century, a movement that served as a significant influence on Japanese art.

Xia Chang’s works are rare, the majority of which are currently held in museum collections, including Bamboo in Wind in the Palace Museum in Beijing, Tapping Jade Autumn Sound in Shanghai Museum and Qiao Breeze in Tianjin Museum. Xia’s works do occasionally appear in the art market, yet pairs of hanging scrolls possessing exceptional quality such as the present lot are exceedingly rare. Previously, it appeared in a 2015 exhibition at The Museum Yamato Bunkakan, Nara as a featured piece. 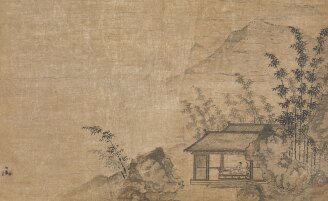