NEW YORK – At first, the large amounts of gold and bronze can seem overwhelming in a 19th-century furniture exhibition. But for our latest exhibition of Property from a Distinguished Private Asian Collection, interior designer Sara Story has shown how these pieces have an inherent modern sensibility that shines when they are integrated into a contemporary setting. Reasonably estimated and composed of both large furniture and small objects, this sale is the perfect opportunity for new collectors or those looking to decorate to branch out into purchasing 19th-century pieces. To better understand the decorative possibilities of 19th-century furniture and objects and to see the pieces with fresh eyes, it is important to disprove the many myths surrounding this field.

It’s all about the bling.
True, the 19th century does have quite a lot of gilt-bronze and brass inlay which makes it seem far more ornate than, say, English furniture; however, there is much more to 19th-century furniture and design than glitter and gold – in our upcoming sale of Property from a Distinguished Private Asian Collection, one can also find many pieces of furniture that reveal a more subdued character. A pair of Sormani commodes pictured above has just a few touches of gilt-bronze and instead focuses on the geometry of the form and the figuring of the wood.

Everything is just an 18th-century copy.
While many 19th-century makers did reproduce direct copies of 18th-century models, these pieces are hardly reproductions! Bronziers like Beurdeley and others created gilt-bronze mounts that rivaled those of their 18th-century counterparts in terms of their quality. These 19th-century recreations were often more expensive than their originals. While many makers did recreate pieces, there was also an abundance of creative designs being produced. This was the time when Universal Exhibitions were creating competition amongst cabinetmakers and pressure was felt to produce something unique. The console by Linke shown above is one of these elaborate pieces that truly defines the quirky, playful, and creative character of the 19th century.

It’s not modern enough.
Even though individual pieces are often over 100 years old, they are still relevant in today’s interiors: Small side tables encrusted in gilt-bronze make for fun drink tables, while beautiful marble-topped consoles can command an entryway. As interior designers have proven throughout the last decade, it is all about the mix, and a stand-out 19th-century piece can indeed be part of that mix. All it takes is a bit of creativity to imagine a black and white Cindy Sherman photograph interacting with the dark Japanese lacquer on a commode or a pile of books and a Hermès ashtray on top of a circular guéridon.

All the pieces are too large for my home.
Many 19th-century pieces are quite large and heavy, with their marble tops and gilt-bronze decorations, but there are also plenty of small accessories that can be found in 19th-century auctions. In the Property from a Distinguished Private Asian Collection sale, there is an abundance of clocks, wall-lights, and vases that can be easily incorporated into any interior. There are also some unusual pieces, such as a small liquor cabinet and a white marble bull (pictured above) that showcase the playful side of the often misunderstood Belle Époque. 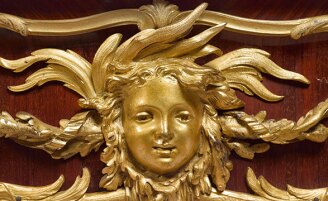