T hree hundred years ago, The Life and Strange Suprizing Adventures of Robinson Crusoe was published. This tale of a shipwrecked castaway initiated an entirely new literary form. Many suggest that it even holds the title of the first English novel.

The book, presented as an autobiography of the eponymous character Crusoe, follows his journey as he is marooned on a remote island near Trinidad. He encounters cannibals, mutineers and after 28 years finally returns to England. The story was written with a keen eye to the contemporary taste for travel and the exotic, largely inspired by Britain's burgeoning power as an international trading nation.

It was an immediate success. Enjoyed by critics, great thinkers of the age and the reading public, Crusoe flew through four editions in it’s first year of publication.

Crusoe also produced its own literary sub-genre. ‘Robinsonade’ (as it would be later coined by the German writer Johann Gottfried Schnabel) is castaway survivalist narrative fiction in which the protagonist(s) are isolated and need to improvise survival from limited resources. Their new beginning often provides a social commentary on the current world and its moral philosophy.

It is a testament to the novel’s enduring influence that four other lots in the sale, sit firmly in the ‘Robinsonade’ subgenre.

Travels into Several Remote Nations of the World by Jonathan Swift is a satirical take on the traveller’s tale genre published first less than a decade after Crusoe. Gulliver’s Travels became a classic almost instantly. John Gay, the English poet, remarked, “it was universally read, from the cabinet to the nursery”.

The Coral Island by R.M. Ballantyne published a century later in 1858, follows the story of three young boys who survive a shipwreck and are marooned on a South Pacific island. 25 years after that, Treasure Island by Robert Louis Stevenson (although originally published in serial form under the pseudonym Captain George North) cemented the coming-of-age adventure island novel for another century. All of these works sit firmly in the English literature canon in their own right.

William Golding’s Lord of the Flies is the most famous example of the tradition in recent literature and provides social commentary for a new and very different world. Where Defoe is moralistic, Swift satirical, Stevenson redemptive and Ballantyne optimistic, Golding presents a pessimistic view about human nature and the inevitable loss of morality. This first edition of Lord of the Flies is one of only 3,040 copies. The novel was not met with the instant success of its predecessors and went out of print within a year.

Three hundered years on it is hard to overestimate the influence Defoe’s work has had on English Literature. These castaway stories fill not only our shelves but also the silver screens. The Suprizing Adventures of Robinson Crusoe is second only to the bible in number of translations. The protagonist is a household name. The novel rests firmly in a selective group of fiction where one feels as though they know the story of Robinson Crusoe without having ever read the book. 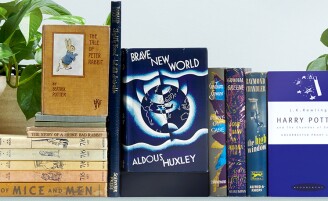