1. Gerhard Richter’s work is widely varied in terms of media, approach, technique, and style. Glenn Lowry, director of the Museum of Modern Art, noted: “Richter is the author of pictures so different from one another that at first glance they seem to be by different hands.”

2. Richter escaped from East to West Germany in 1961, two months before the building of the Berlin Wall. 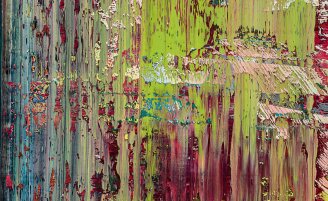 3. He coined the term Kapitalistischer Realismus (Capitalistic Realism), for the style of anti-art in which he, Konrad Fischer and Sigmar Polke worked in the 1960s, which utilized the imagery, techniques and typography of advertisement. The term Capitalistic Realism was intended as a condemnation of the commodification and commercialization of art, and as a play on Socialist Realism, the official – and only allowed – art of the Soviet Union.

4. In addition to his artistic production, Richter has also taught throughout most of his career, at the Art Academy of Dusseldorf, the University of Fine Arts of Hamburg, and the Nova Scotia College of Art and Design.

5. Richter compiled his major pieces of writing, interviews, and various opinions in a chronological collection entitled The Daily Practice of Painting: Writings and Interviews, 1962-1993. Many of his opinions are concise and brief: “My sole concern is the object. Otherwise I would not take so much trouble over my choice of subjects; otherwise I would not paint at all.”

6. In the 1960s, Richter’s hallmark ‘blur’ works presented photopaintings, in which he would project a photograph onto a canvas, and obscure the image through various methods including squeegee, or light touches of paint or glue. He would choose from a wide range of sources, including personal photographs of family and friends, images of public figures taken from newspapers, journals, and books or snapshots he took himself.

“Art should be serious, not a joke. I don’t like to laugh about art.”

7. Uncle Rudi, a quintessential example of his photopaintings, presents an army officer of the Third Reich smiling in front of a nondescript background, melting together the casual and the sinister. The fact that the officer was Richter’s uncle, killed in battle at Normandy, emphasizes the personal element of a broader history; the portrait’s blurred quality brings attention to the instability of memory.

8. His family history encompassed both the evil and the painful tragedy of the Holocaust. His uncle was a Nazi officer, and his father reluctantly joined the party, while his Aunt Marianne, who had been diagnosed with schizophrenia, was sterilized and starved to death by the Nazi program to exterminate the mentally ill. Marianne appears in a photograph, which the artist would later use for a photopainting, proudly joyful and holding the infant Gerhard Richter, just a few years before her execution.

9. Richter was flying to New York on September 11, 2001, but like many planes scheduled to arrive in New York on the day of the attacks on the twin towers, his plane was diverted to Halifax, Nova Scotia. He made a small painting about the attacks a few years later. 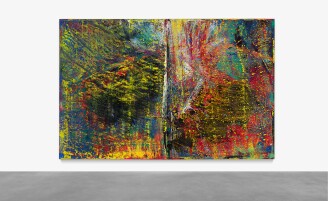 10. Beginning in the late 1960s, he redirected his attention to abstraction. By the 1980s, he concentrated on expressionist paintings on large canvases; in some instances, these abstractions are based on photographs of details of his own work.

11. Richter has remained highly experimental and innovative in his technical approach to artistic production. In addition to his use of relatively common painterly techniques of the modern era such as troweling, scraping, and brushing, he also utilizes unconventional tools and methods such as squeegees, or using alcohol to turn ink droplets into blooming clots.

12. Although Richter is at times playful and contradictory, he has condemned the irony of contemporary art: “To me, it’s mainly entertainment. Art should be serious, not a joke. I don’t like to laugh about art.”

13. Don DeLillo’s 1988 short story "Baader Meinhof," in which two strangers have an awkward, seemingly unwanted and halted romantic encounter after discussing history, art, death, and terrorism, begins in the room within the Museum of Modern Art where Richter’s October 18, 1977 painting cycle is on display. The photopaintings in the series confront the viewer with the deaths of the members of militant Baader Meinhof group in Stammheim Prison.

14. His explanation of his profession is practical and seemingly honest, “I believe in painting and I believe in eating too. What can we do? We have to eat, we have to paint, we have to live. Of course, there are different ways to survive. But it’s my best option. I didn’t have so much choice when I was young.”

15. Richter is diligent and tidy. His studio appears nearly spotless, and he works on a regular routine. Even his daily lunches have remained unchanged: hummus, tomatoes, and yogurt.

16. Sonic Youth used Richter’s painting Kerze I (Candle I) for the cover of their 1988 album Daydream Nation, free of charge, because the painter is a fan of the band. The original painting, which stands at over 23 feet high, is now on display in Sonic Youth’s New York City studio.

17. Richter is one of the highest paid artists in the world. His works have consistently been sold for millions of dollars for decades. In just one year (2010), almost $77 million worth of Richter’s work was sold. Although Richter enjoys considerable wealth as a result of his commercial success, he has expressed shock when asked about the high price of his paintings: “It’s just as absurd as the banking crisis. It’s impossible to understand, and it’s daft!”

19. In describing his color chart work, his explanation has linked these works with Dada and Surrealism: “What interests me most about these works is that chance does it better than I can, but I have to prepare the conditions to allow randomness to do its work. Chance determines our lives in important ways.”

20. Richter is famously camera-shy. In Corinna Belz’s short film Gerhard Richter’s Window in 2007, the artist appeared on camera for the first time in fifteen years. Belz won the German Film Award for Best Documentary for Gerhard Richter Painting, her 2011 feature-length documentary about the artist.

21. Richter has continued to work into his 80s at home in Cologne. He has a daughter from his first marriage to Marianne Eufinger, and three children born since 1995, with his third wife Sabine Moritz.