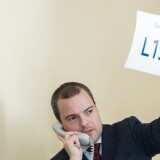 Pedro Reiser joined Sotheby’s Watches Department in Geneva in 2014 after having worked in the watch industry for over 12 years at Rolex and Breguet. His experience as a Market Manager in Europe, Asia and the Americas enabled him to build in-depth knowledge of the watch market, getting to know its main actors and developing an extensive network in the field.

Mr Reiser obtained a Bachelor’s degree in Business Administration at Parsons School in Paris in 1999. He travels frequently in Europe, Asia and the United States, participating in Sotheby’s auctions of Important Watches. Originally from Switzerland, he was born in Lima, Peru and is fluent in six languages: German, English, French, Spanish, Portuguese and Italian.