A s part of its permanent launch into Streetwear, Sotheby’s is dropping an outstanding collection of over 120 Louis Vuitton x Supreme items – available for immediate purchase on our Buy Now marketplace. Sourced in conjunction with Jing Daily’s newly launched Modern Collectibles Division – created to define the recent emergence of new collecting classes including streetwear and fashion, sneakers, trading cards, and memorabilia – the drop features some of the most desirable elements of the hyped collaboration between these two titans of industry encompassing pieces from hoodies, t-shirts, hats and scarves to sneakers, backpacks, keychains and more, with prices ranging from $475 - $6,785. 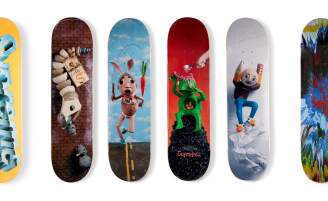 In April of 1994 Supreme New York opened its doors for the first time on Lafayette Street in Soho. James Jebbia, the founder of Supreme, moved back to the United States in 1983 after spending the first 18 years of his life in the United Kingdom. In 1989, before founding Supreme; Jebbia was responsible for the conception of UNION alongside his then partner Mary-Ann Fusco. UNION was an independent downtown boutique that sold clothing primarily from Japan and the UK. In 1991 he went on to work with the acclaimed Shawn Stussy, as a manager and operator of the Stussy store in Soho. When Shawn Stussy retired from the brand, Jebbia felt the need to pivot.

Although never a skater himself, he admired the rebellious nature of the culture. Drawn to the graphics of the clothing, he felt the fit and quality of the materials needed improvement and more relevance to the East Coast skate scene. When Supreme opened in ‘94 it was first and foremost a skate shop. Upon entering, one would likely notice that all of the products lined the walls, not centered on the floor. This purposeful merchandising decision was dedicated to the employees and skaters who would roll directly onto the shop’s smooth wooden floor directly off the street.

Early employees were staple skaters from the New York skateboarding community, many of whom became extras in Harmony Korine and Larry Clarke’s film KIDS. According to Jebbia, Supreme had no intention of becoming a full-fledged brand. Supreme was designed to be a community clubhouse for skaters; providing them the opportunity to buy new boards or hardware, as well as T-shirts from other Skate brands such as Shorty’s or Zoo York. On opening in April 1994, Supreme launched with just three of their own graphic t-shirts: One of Robert De Niro’s character Travis Bickle from the movie ‘Taxi Driver’; one depicting an afro haired skateboarder, and one featuring the now iconic ‘Box Logo’- a fiery red rectangle with “Supreme” centered in white ‘Futura Bold’ font. Originally inspired by the works of artist Barbara Kruger, the box logo was a simple, yet eye-catching design.

After 4 years of business, Jebbia was approached by Ken Omura, the operator of OneGram, a distribution company in Japan. Japanese tourists visiting New York had developed an affinity for Supreme products, and Ken Omura wanted to bring the brand to Japan. Within a six-month period, Ken opened three Supreme stores in the country. Daikanyama, Osaka, and Fukoka were now home to Supreme brick and mortar locations. 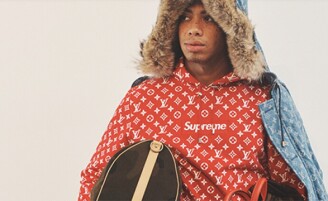 The Japanese stores saw tremendous success. So much so that in the early 2000s, a lottery system was put in place to manage store lines and demand for products. ( This system wouldn’t happen in New York until 2017.) With the brand developing at a rapid rate, and Japanese style influence infiltrating the US, Supreme looked for more ways to expand.

By 2004, Supreme was back on American soil. This time, they opened their 5th store, located on Fairfax Avenue in Los Angeles. While Melrose and La Brea Avenues (home to both UNION & Stussy) were known as the shopping destinations at the time; Supreme opted for Fairfax, an avenue dominated by small Jewish businesses, delis and restaurants. During the launch party for Supreme LA, guests were given special ‘Box Logo’ tees featuring Supreme written in Hebrew, an homage to the Jewish legacy of Fairfax prior to Supreme’s entry.

Supreme Los Angeles was double the size of the New York store and featured a free-standing skate bowl designed by Steven Bladgett of American art collective Simparch as it’s centrepiece. The store’s success coupled with the cheap rent on Fairfax drew the attention of other streetwear brands and soon enough, other streetwear labels and shops began moving in next door; creating what is now known as the Fairfax Strip. Quickly becoming a hub for fashion, skate and like-minded individuals; it wasn’t uncommon to see teenagers and creatives lining the avenue. The community that the brand had created in New York and Japan was bubbling in LA. Large lines for special releases; skaters in the street; and celebrity sightings became the new normal for the area.

By the mid 2010s, Supreme was officially a globally recognized brand. They opened shops in London and Paris, tightening their grip on the streetwear space. Products were quickly selling out and the resale market became an expensive conduit for collectors, and anyone trying to get their hands on a piece. T-Shirts, hoodies, and decks (commonly retailing between $38 - $180) were reselling for hundreds, sometimes thousands of dollars. The demand was so high, in-store releases were being shut down by police departments. As the hype continued to grow around the brand, streetwear outsiders began to take notice.

2017 was an important year for the brand. In collaboration with Louis Vuitton, Supreme unveiled a groundbreaking collection called “Friends and Heroes” at Paris Fashion Week. Streetwear and Skate Culture had officially entered luxury fashion. The collaboration broke boundaries and remains one of the most coveted to collectors today.

Sotheby’s is proud to have partnered with Jing Daily to offer this incredible collection of Louis Vuitton x Supreme items, as part of Sotheby’s launch into the streetwear space - offered in conjunction with a simultaneous auction of a 200+ Supreme decks: Stacked Decks | The Supreme Collection.