The Oppenheimers lived in a time when it was still possible to acquire important pieces as they were being deaccessioned from the Royal collections in Dresden. The couple lived in a grand apartment block on Regentenstrasse in Berlin, immediately next to the Tiergarten. In the early 20th Century this was in the heart of Berlin's collecting community. In 1927, like many serious Berlin connoisseurs, the couple commissioned a private catalogue of their collection. They chose Professor Ludwig Schnorr von Carolsfeld, curator of the nearby Berliner Schlossmuseum, as their author. A number of the pieces in this sale were included in this privately produced catalogue and bear a black Oppenheimer inventory number between 1 and 239. Franz and Margarethe continued to collect after the 1927 catalogue and added over 100 pieces of Meissen porcelain to their holdings.

The Remarkable Resilience of the Oppenheimer Meissen Collection

Once the Nazis came to power Franz Oppenheimer was persecuted because of his Jewish origins. Consequently, in around December 1936, he and Margarethe fled from Berlin to the comparative safety of Vienna having paid punitive emigration taxes to the Nazi Government (so called Reichsfluchtsteuer). Franz and Margarethe’s exile in Vienna did not last long. German troops entered Austria on March 12, 1938, and Adolf Hitler proclaimed the Anschluss of Austria into Germany the following day. The Oppenheimers had been able to escape to Budapest the day before the Anschluss carrying only hand luggage. From Hungary they travelled via Sweden and Colombia before finally reaching their new home in New York three and a half years later - in December 1941. Franz and Margarethe chose to spend the remainder of their lives in an apartment on East 86th Street in Manhattan, close to Franz’s brother Leo and, as it happens, just a few blocks from Sotheby’s present-day headquarters.

It is not known precisely when the objects in this sale were lost to Franz and Margarethe, but we do know that they were with their next owner, Fritz Mannheimer, before his premature death in 1939. Fritz Mannheimer was another great connoisseur-collector. He was born in Germany in 1890 and moved as a young man to Amsterdam where he established the Dutch branch of the Berlin based Mendelssohn Bank in 1920. Like the Oppenheimers he commissioned a scholar to catalogue his collection. He chose Otto von Falke, late director of the Berlin Kunstgewerbemuseum, to prepare his catalogue. The porcelain in this sale was all acquired after von Falke completed his work in March 1936. Fritz Mannheimer was an active opponent of the Nazi regime and was active in supporting Jewish refugees from Germany. On August 8, 1939, in the midst of his bank’s crisis, Fritz Mannheimer left for a break in France. Upon his arrival in Vaucresson he went for a walk in the garden and tragically suffered a massive heart attack. He died a few hours later at the age of 48.

Kajetan Mühlmann, a member of the SS based in Holland, acquired the collection for Adolf Hitler in 1941. As Allied bombing placed the Führer’s art holdings in peril, the Meissen porcelain that had been acquired from Fritz Mannheimer’s estate was moved for safe keeping first to Vyšší Brod Monastery in Bohemia and later to the salt mines in Bad Aussee. The porcelain was eventually discovered by Allied Monuments Officers and was transferred to the Central Collecting Point Munich (the former Führerbau) in 1946. The collection was sent back to the Netherlands between 1945 and 1949. After the recovery of the Mannheimer collection, the collector’s executors did not seek restitution (because they would have been obligated to refund the price paid by the Führer’s curators) and the collection passed into Dutch State holdings. Of the porcelain, some was held as property available for restitution (so called ‘NK’ property) and some was transferred to the Rijksmuseum.

Earlier this year the Restitution Commission of the Netherlands accepted that the porcelain in this sale that had belonged to Franz and Margarethe Oppenheimer must be restituted to their heirs. Sotheby’s is honored to have been chosen to offer this remarkable collection for sale, a physical testament to the connoisseurship of Franz and Margarethe Oppenheimer and a witness to the turmoil of the 20th Century. 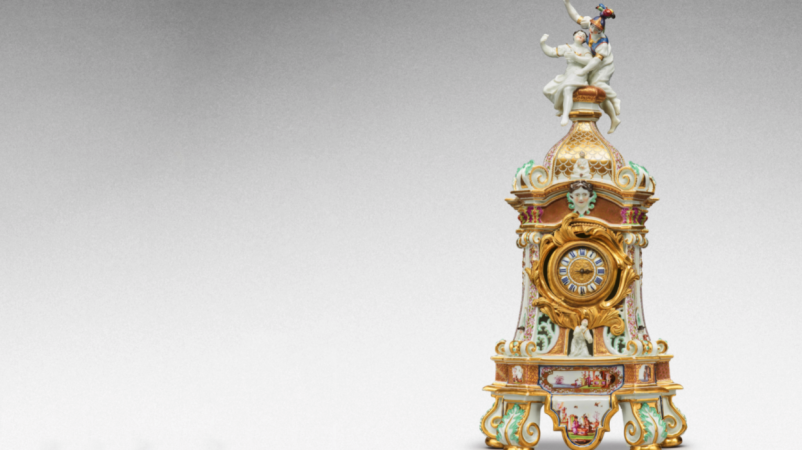 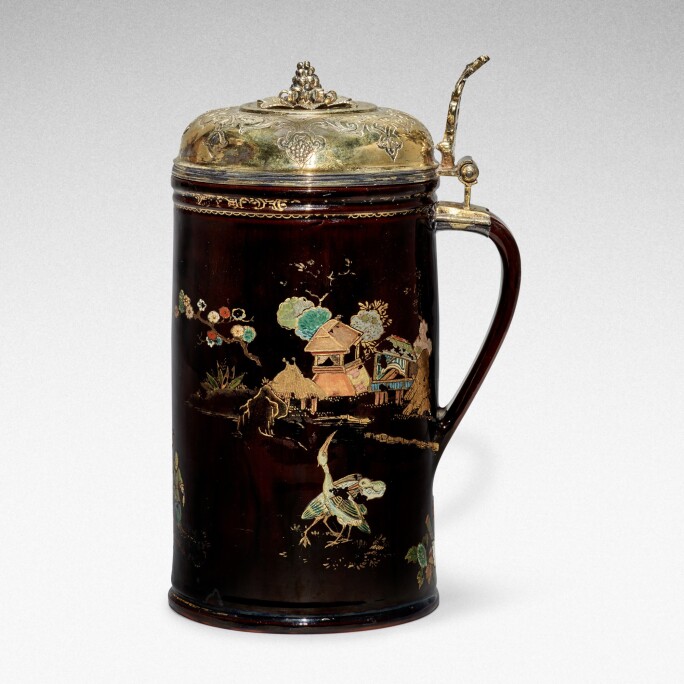 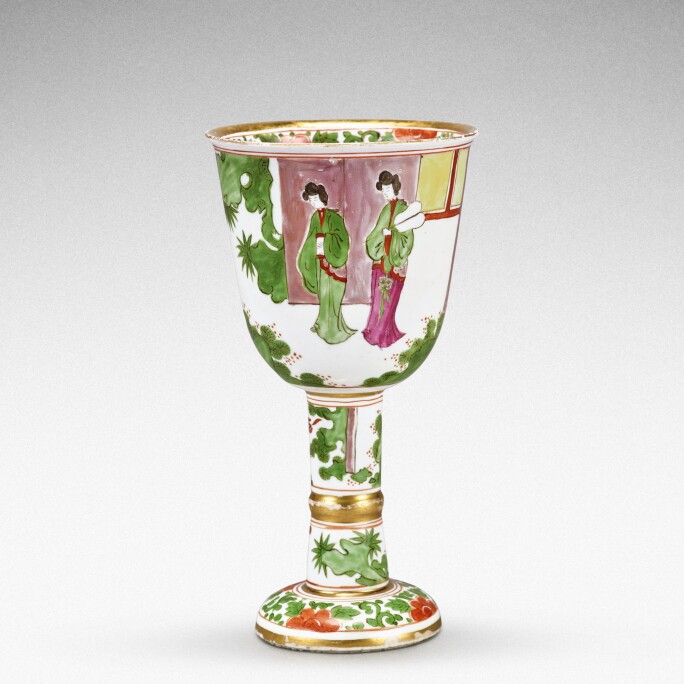 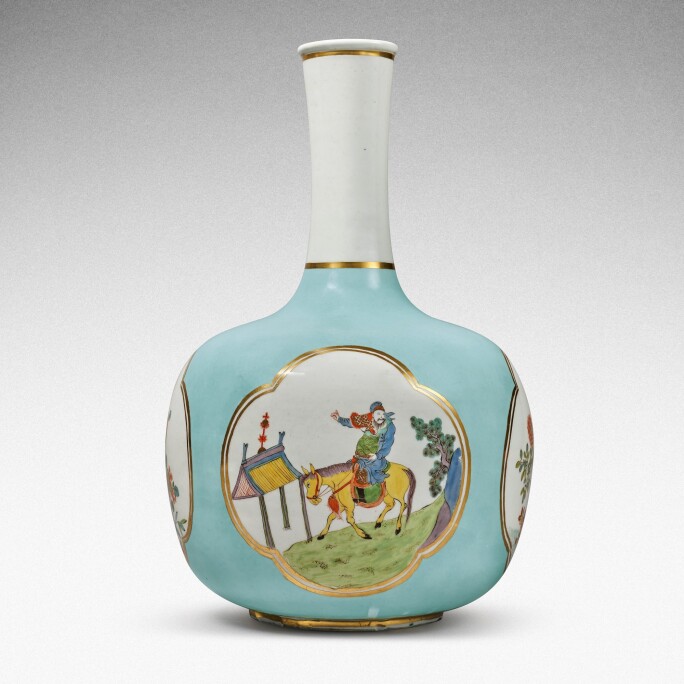 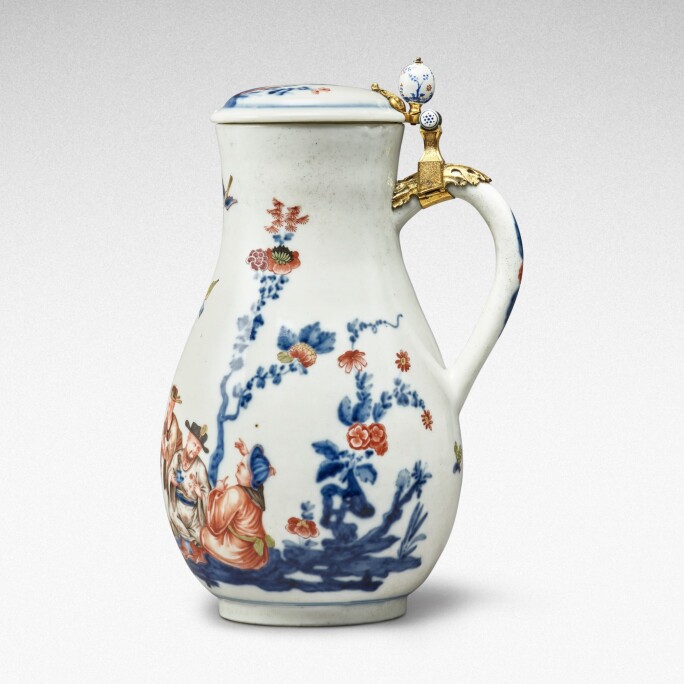 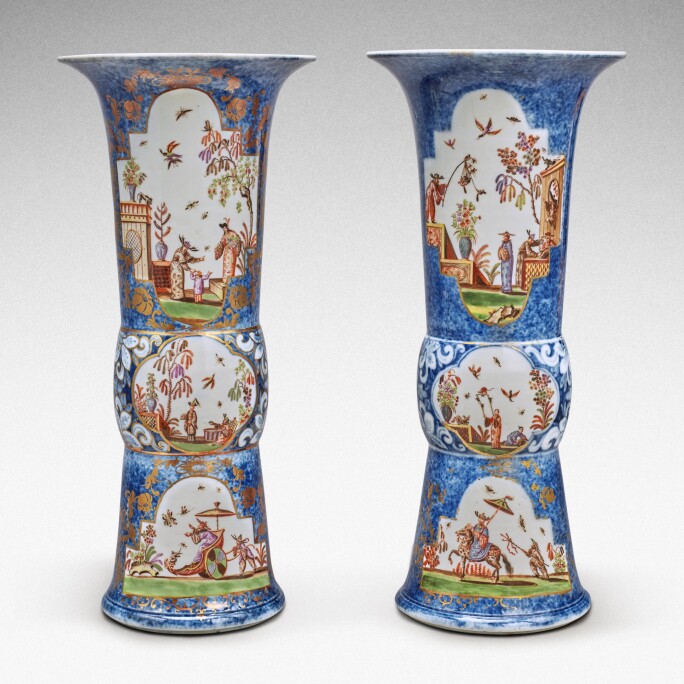 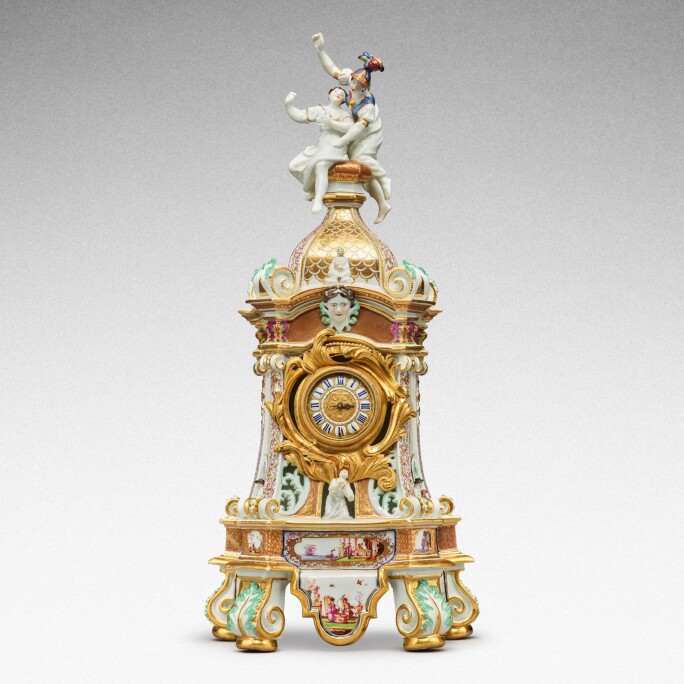 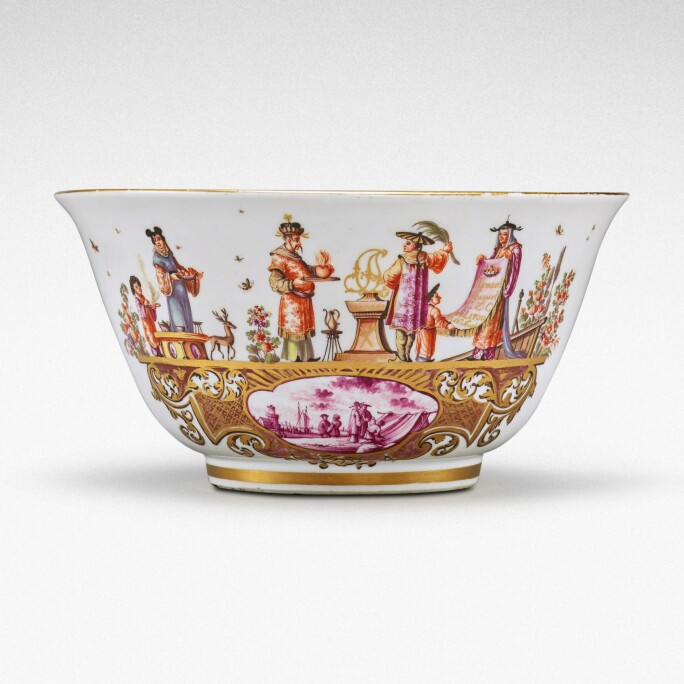 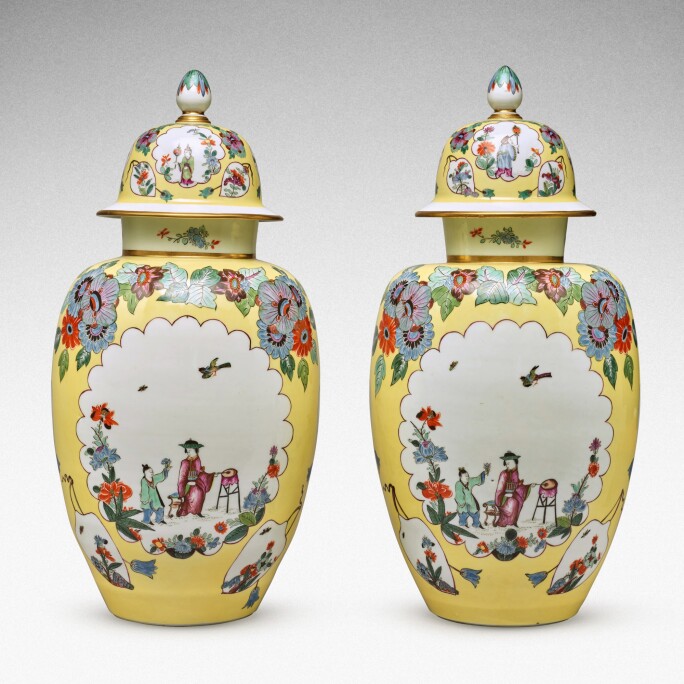 The German Baroque ‘Japanese Palace’, one of the first to be built in Europe in the new Chinoiserie style, still stands today on the Neustadt bank of the River Elbe on the outskirts of Dresden. It was envisioned by Augustus the Strong (1670-1733), Elector of Saxony and King of Poland, and founder of the Meissen manufactory, to house his immense porcelain collection. He engaged the leading Dresden architects of the time, Pöppelmann, de Bodt, Longuelune and Knoffel to realise his vision of creating a ‘porcelain palace’. The surviving architects’ plans, with annotations made by the King himself, give an indication of the grandeur of the venture, with later plans outlining that the King's collection of Chinese and Japanese porcelain was somewhat demoted to the lower floor. At the time vast numbers of Meissen porcelain, counting in the thousands, were ordered to fill the rooms on the main enfilade (upper floor). These porcelain-filled rooms were to be ordered by ground-colour: the pavilion in the north-east corner was to be filled with seladon-ground porcelain, which would lead into three rooms dedicated to yellow, dark-blue, and purple-ground Meissen. The east and west wing suite rooms were to be joined by two large galleries stretching the width of the Palace. The north front gallery was to be filled with a ‘porcelain menagerie’ of near life-sized Meissen animals, and the south side gallery, flanked by the throne alcove and glockenspiel pavilion, was to be filled with alt-indianisch (blue and white) porcelain vases.

The interiors were never completed, and shortly after the death of Augustus the project was abandoned altogether. 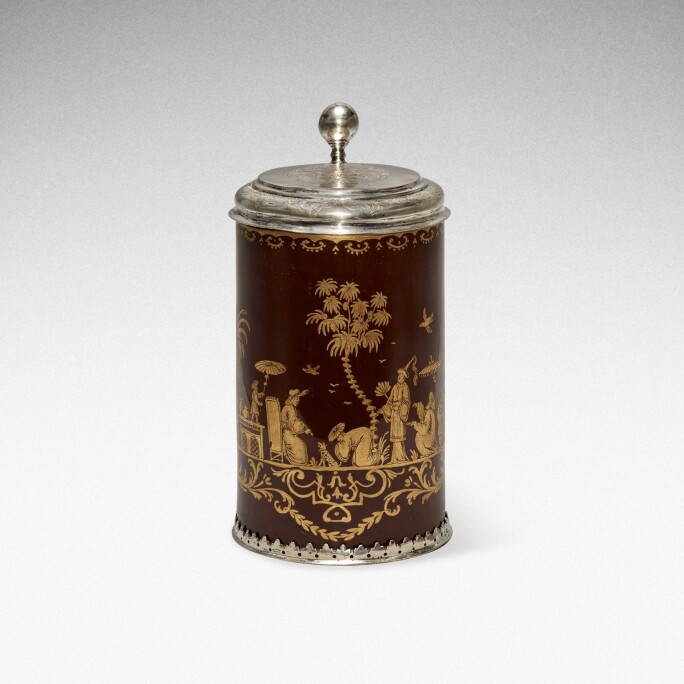 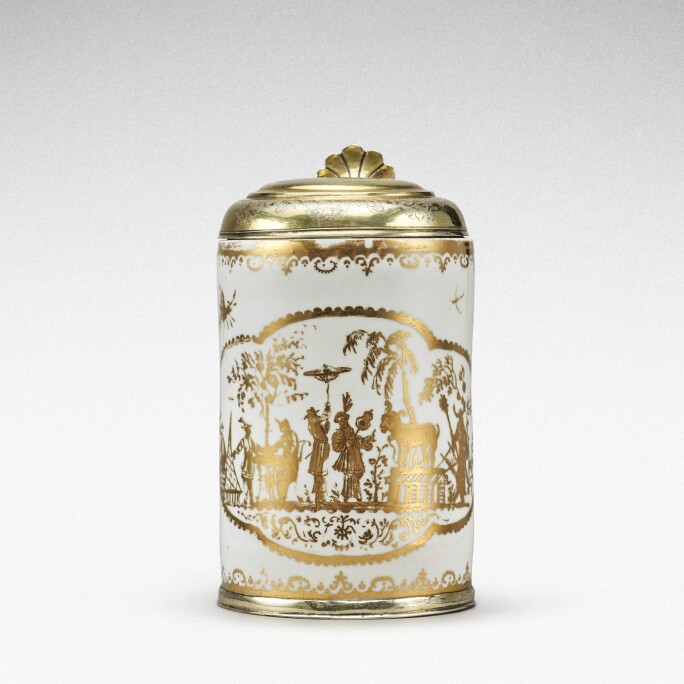 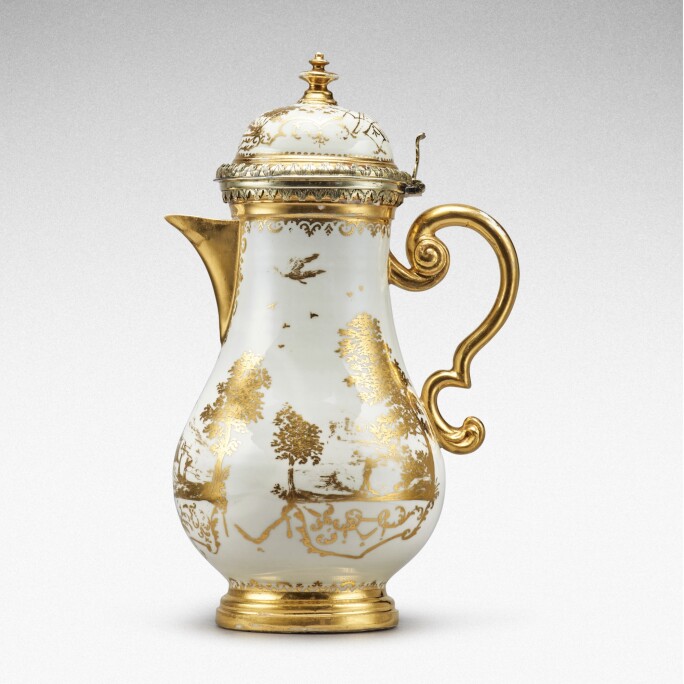 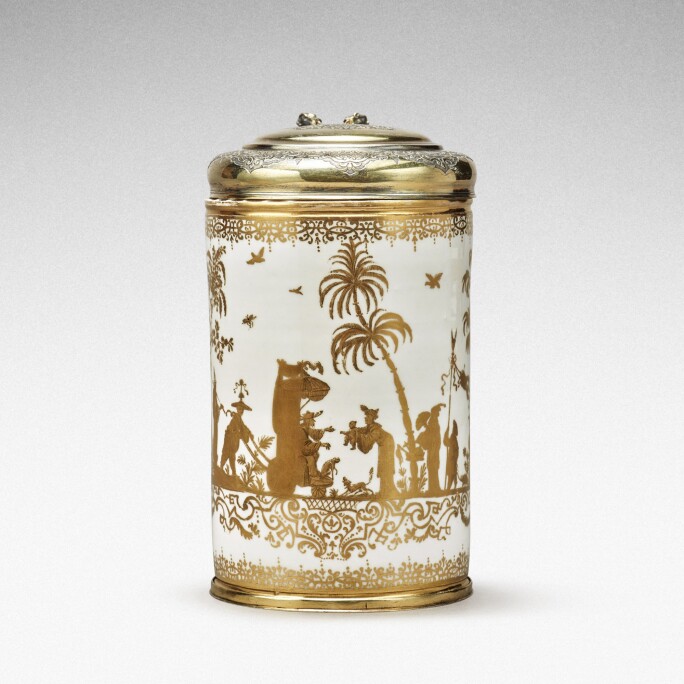 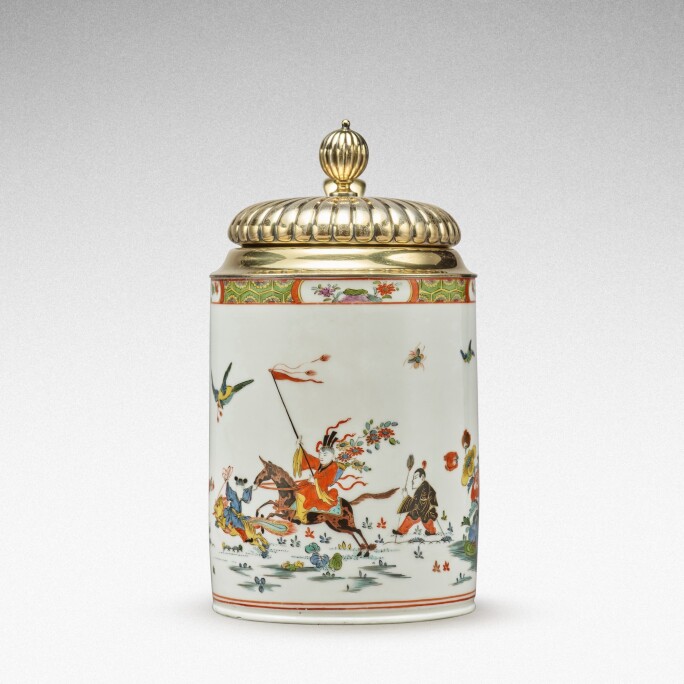 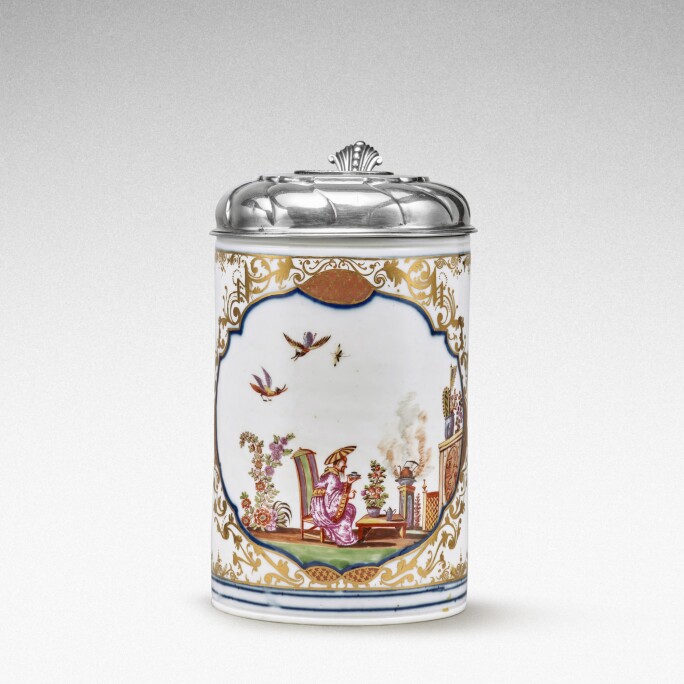 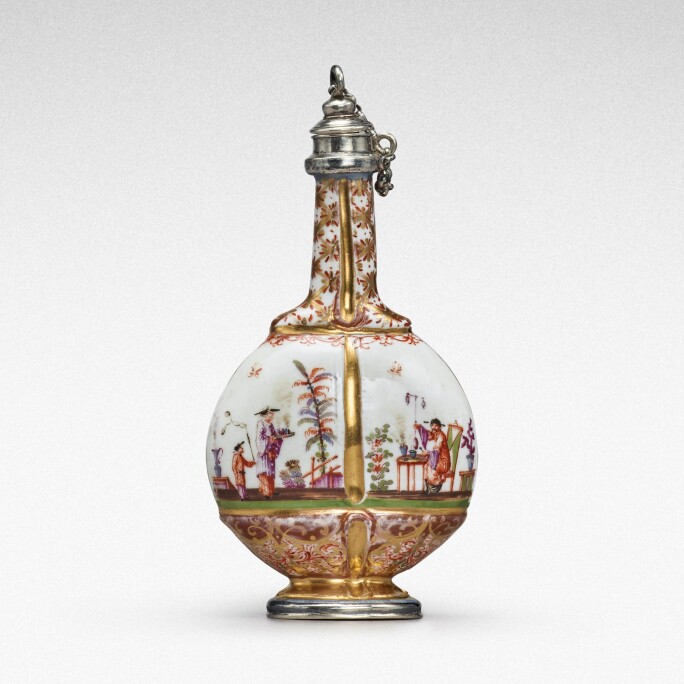 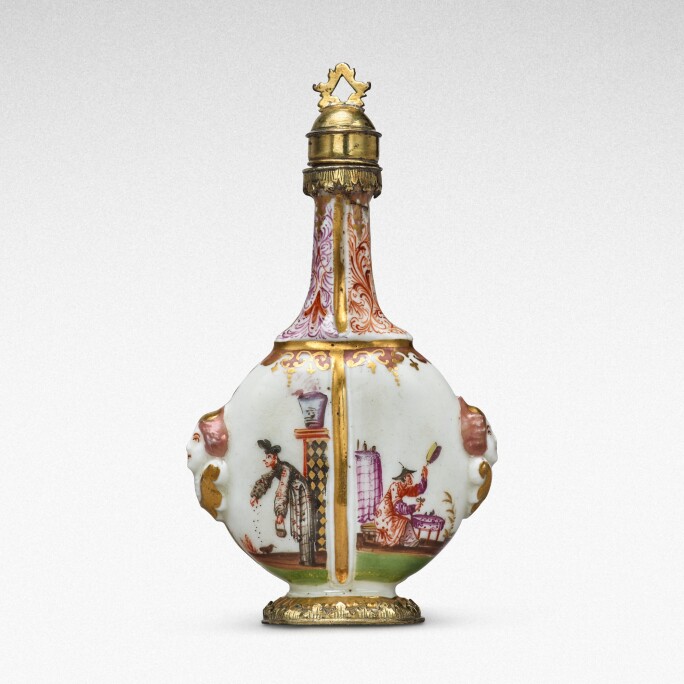 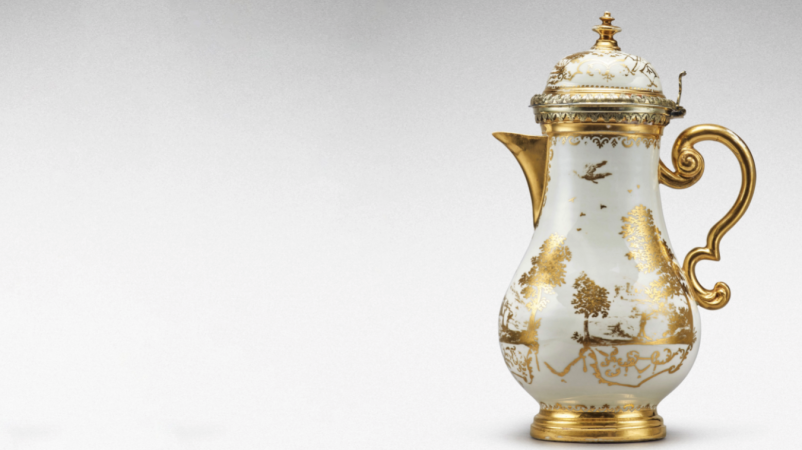