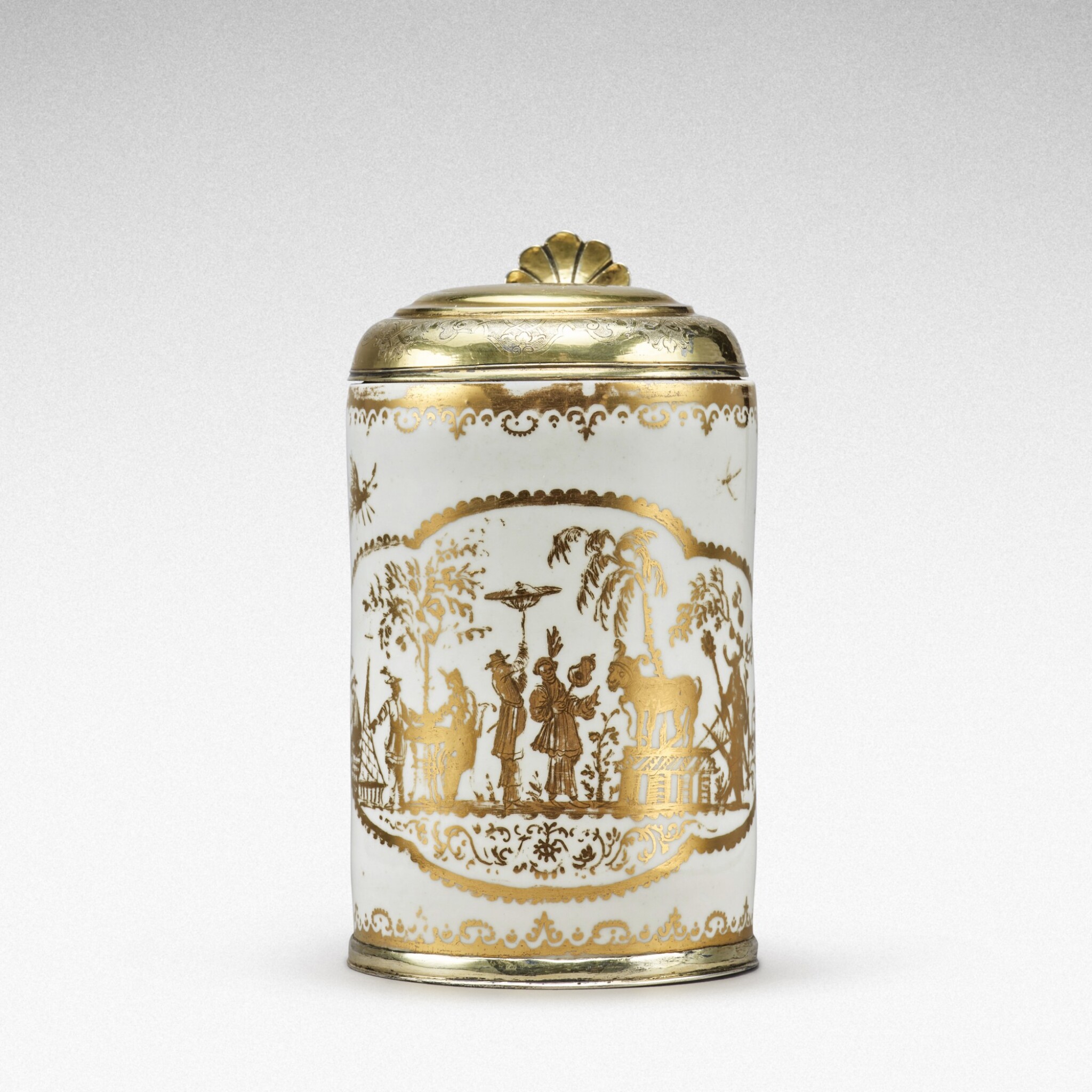 decorated in Goldchinesen style, in Augsburg, with a tethered donkey standing on a raised platform and wearing a fool's cap amidst figures and trees within a dentil-edged quatrefoil cartouche, the handle flanked by smaller vignettes of figures beneath trees, above and below narrow scrollwork borders, the hinged mount chased with foliate scrollwork and with a palmette thumbpiece, the mounts marked Augsburg, maker's mark EA for Elias Adam.

There is wear to the gilding of the handle.

Some typical scattered patches to gilding on lip of rim and band at top edge. The figures with scattered wear as visible in the illustrations. The piece is intact without restoration.

Recovered from the above by Allied Monuments Officers and transferred to the Central Collecting Point Munich (MCCP inv. no. 2367/16);

It is noted by den Blaauwen that the Seuter family did not generally incorporate cartouches in their gilt decoration, as seen on the present tankard. A Hausmaler tankard with a shield shape cartouche is in the Kunstsammlungen & Museen, Augsburg; and a part-coffee service with cartouches is in the Spreewald-Museum, Lübbenau, illustrated in Ducret, 1971, p. 184, abb. 198 and pp. 238-40, abbs. 314-318.

Elias Adam became a master in Augsburg in 1703, and spent the first part of his career specializing in mounting in silver and silver-gilt various precious materials: carved agate, ruby glass, painted enamels, carved ivory, even ostrich shells. Around 1720 he was mounting Augsburg-decorated faience, including pieces from the workshop of Bartholomaus Seuter. This connection may have brought him to the attention of the Dresden court, who started having Adam mount their new precious material, the “white gold” of Meissen, around 1722 – the same year the factory began commissioning the Seuter workshop to decorate its white porcelain with gilded decoration.

For the rest of the 1720s, Adam’s workshop production was almost exclusively mounts for Meissen porcelain, particularly coffee pots and tankards. On the latter form, he displayed a sophisticated French-influenced Régence style, with chased interlace strapwork on matted grounds. Adam finished not just Augsburg-decorated pieces but also factory-decorated items, and mounted more Meissen than any other silversmith of the period. His work for Dresden tapered off after 1729, when the factory began sending less to Augsburg for gilding, but the backstock of locally-decorated pieces kept him occupied, and he continued to supply some mounts, and spoons for cased sets, through the 1730s.