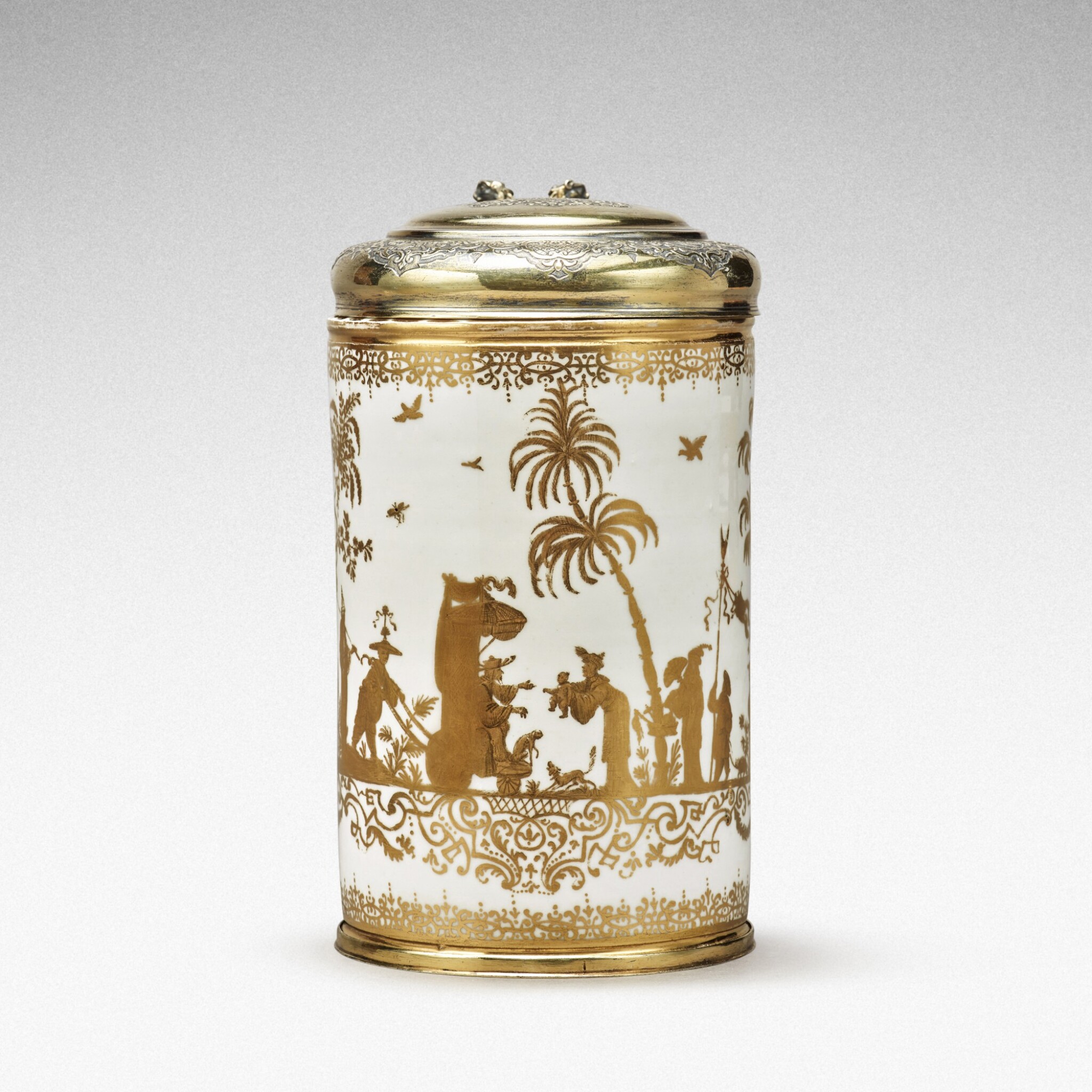 decorated in Goldchinesen style, probably in the Seuter workshop, Augsburg, with a continuous scene of an attendant pushing a figure seated in a canopied cart with his pet monkey and reaching for a child held out in the hands of a woman before him, flanked by further figures beneath trees in a fenced and terraced garden, supported on an ornate foliate scrollwork panel between narrow scrollwork borders at the rim and foot, the centre of the hinged cover chased with a scroll- and diaperwork medallion within a similar border around the edge and affixed with a double scroll thumbpiece terminating in lions' heads, silver-gilt cover marked Augsburg, date letter A, maker's mark EA for Elias Adam.

Overall the appearance of the tankard is good. The lower terminal of the handle with a short firing crack. For a tankard of this type the condition of the gilding is good. Some typical rubbing to lip of rim from mount. Some minor scattered small patches of rubbing to figural scene. A patch of wear to glaze at side of handle 0.8 x 0.2 cm, which probably occurred during production.

Recovered from the above by Allied Monuments Officers and transferred to the Central Collecting Point Munich (MCCP inv. no. 1570/9);

A silver-gilt mounted tankard with a near identical gilt scene was sold at Sotheby's London, March 9, 1965, lot 161, illustrated in Ducret, 1971, figs. 165-66. Another is in the Henry H. Arnhold Collection, The Frick Collection, New York, illustrated in Cassidy Geiger, 2008, p. 599, no. 295. A waste-bowl with the same gilt-figures was in the Georg Adolf Remé Collection, Hamburg sold, Hans W. Lange, Berlin, April 7-9, 1938, lot 659, later sold at Sotheby's Monaco, May 26, 1980, lot 372. Ducret, illustrates factory wares decorated in colours using the same figuration which he believes to be the models for the Augsburg painter, figs. 161, 163-64, including a coffeepot from the Hans C. Syz Collection, in the Smithsonian, acc. no. 1982.0796 and a teapot in the Metropolitan Museum of Art, New York, acc. no. 42.205.70a, b. The ultimate source is likely the engraving by Arnoldus Montanus, Gesantschappen aem de Kaisaren von Japan, der Ostindischen Kompagnie, Amsterdam, 1670, p. 161, though probably through an intermediary Chinoiserie print.

Elias Adam became a master in Augsburg in 1703, and spent the first part of his career specializing in mounting in silver and silver-gilt various precious materials: carved agate, ruby glass, painted enamels, carved ivory, even ostrich shells. Around 1720 he was mounting Augsburg-decorated faience, including pieces from the workshop of Bartholomaus Seuter. This connection may have brought him to the attention of the Dresden court, who started having Adam mount their new precious material, the “white gold” of Meissen, around 1722 – the same year the factory began commissioning the Seuter workshop to decorate its white porcelain with gilded decoration.

For the rest of the 1720s, Adam’s workshop production was almost exclusively mounts for Meissen porcelain, particularly coffee pots and tankards. On the latter form, he displayed a sophisticated French-influenced Régence style, with chased interlace strapwork on matted grounds. Adam finished not just Augsburg-decorated pieces but also factory-decorated items, and mounted more Meissen than any other silversmith of the period. His work for Dresden tapered off after 1729, when the factory began sending less to Augsburg for gilding, but the backstock of locally-decorated pieces kept him occupied, and he continued to supply some mounts, and spoons for cased sets, through the 1730s.