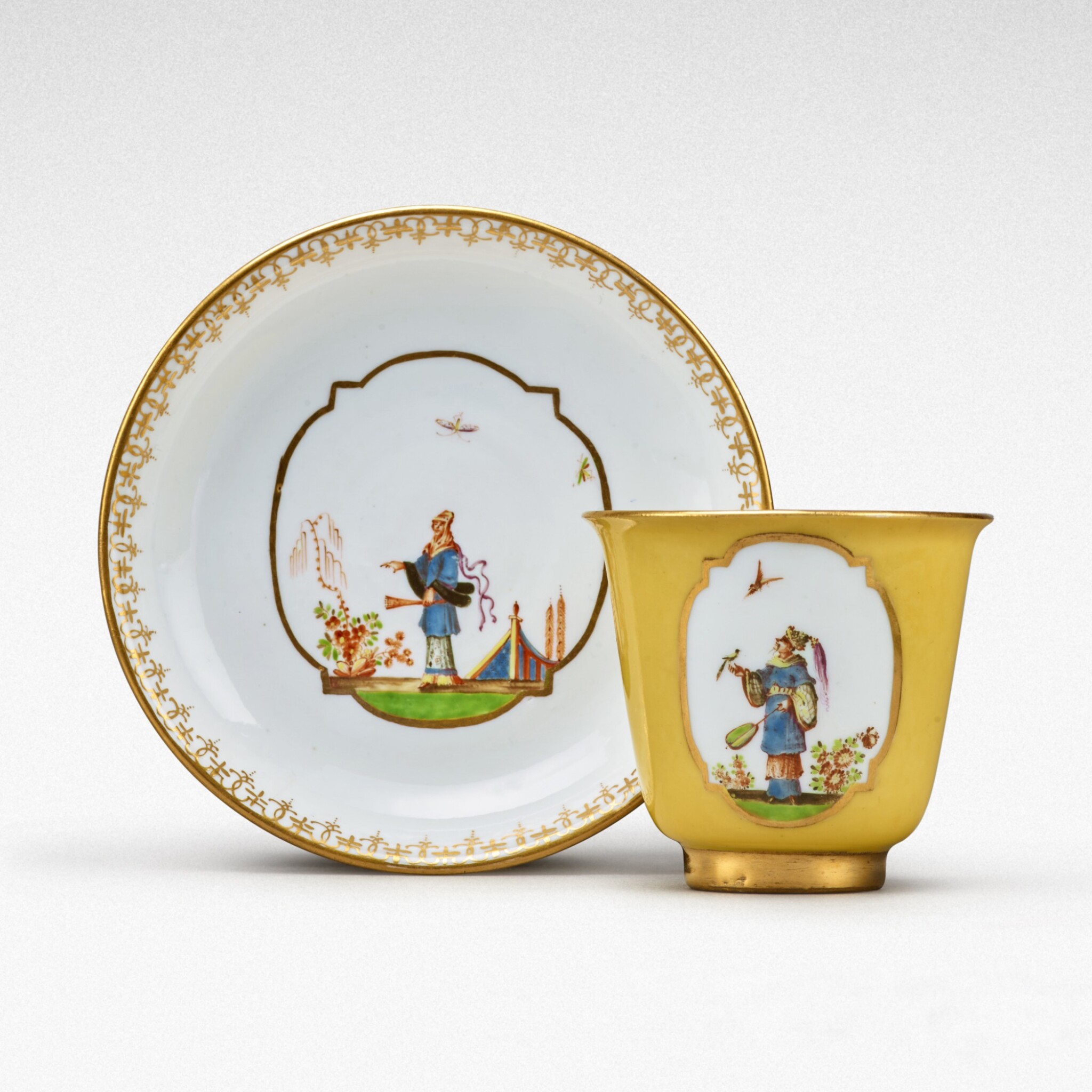 reserved on the cup with a gilt-edged shaped quatrefoil cartouche painted, probably by J. G. Höroldt, with a figure standing in a garden holding a fan in one hand and with a bird perched on his finger of his other, the saucer with a similar figure wearing a head covering and holding a fan, AR marks within concentric circles in underglaze-blue, engraved Japanese Palace inventory number N. 117 W.

Diameter of saucer: 4⅞ in.

There is an extremely faint short hairline crack to rim of the beaker measuring approximately 0.3 cm long, partially hidden by the gilt-scroll border. The saucer is in good condition. Both pieces are in good appearance. The enamels and gilding in good condition and vibrant.

Recovered from the above by Allied Monuments Officers and transferred to the Central Collecting Point Munich (MCCP inv. no. 1475/4);

This chocolate cup and saucer was originally part of a set of six, and can be identified in the listing of porcelain delivered to the Royal Court of Augustus the Strong between May 26 and July 28, 1727: "6. st. fein emaillirte Choccolade becher mit 1. Henckel mit gelber Glasur and 6. st. do. unterschaalen", [6 finely enamelled chocolate cups with 1 handle, with yellow glaze, and 6 matching saucers.], Claus Boltz, 'Eisbären und Polarfüchse ./. 6 Kästen Sächsisches Porzellan' in Keramos 148, 1995, p. 13.

In 1770, the chocolate cups and saucers are included in the inventory of the Japanese Palace: “Sechs Stück Chocolaten Tassen auswendig gelb mit vergoldten Zierrathen auch einem Schilde gemalht, mit einem Henckel, 2 3/4 Z. tief, 3 Z. in Diam No. 117”, [Six chocolate cups, yellow on the outside, painted with gilt decorations, also a reserve, with a handle... together with six matching saucers... No. 117], Boltz, 1996, p. 51.

The 1919 Rudolph Lepke sale of duplicates catalogue includes a similar cup, illustrated with the present saucer which is not referenced in the lot entry. Following the sale that cup, paired, however, with a different saucer, entered the collections of Dr. Paul von Ostermann, Darmstadt/Munich, sold by Paul Cassirer and Hugo Helbing, Berlin, October 30 - November 2, 1928, lot 194, taf. 9; and Baron Erich von Goldschmidt-Rothschild (1899-1987), included in his sale at Hermann Ball & Paul Graupe, Berlin, March 23-25, 1931, lot 573, taf. 90. Both are now in the Nationalmuseum, Stockholm, inv. no. NM 124/ 1940.

According to den Blaauwen, 2000, p. 117, two other cups from this service (lacking saucers) are still in the Porcelain Collection, Dresden, one is on loan to the Schauhalle of the Meissen manufactory, illustrated in Rudi, 2010, p. 225, 6C; the other is badly damaged. A further cup, probably the sixth from the service, was sold at Christie's London, September 30, 1991, lot 264.