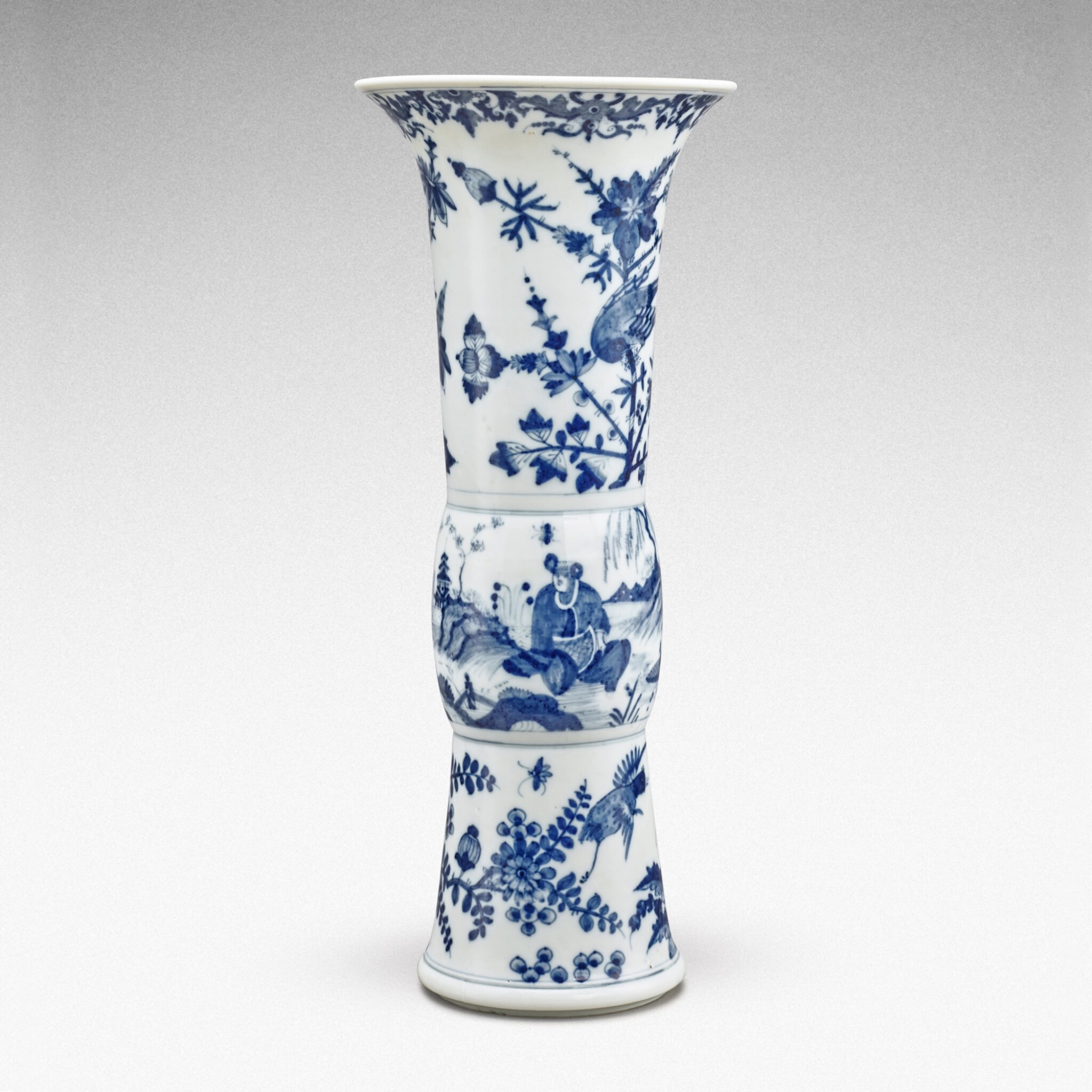 similarly decorated to the preceding lot, AR mark in underglaze-blue.

In very good condition and appearance. No damage noted.

Recovered from the above by Allied Monuments Officers and transferred to the Central Collecting Point Munich (MCCP inv. no. 1610/1);

A brief but informative summary of the development of underglaze-blue decoration at the Meissen porcelain factory is provided in Santangelo, 2018. The author explains on p. 89 that it was of paramount importance to Augustus the Strong that his factory be successful in achieving the brilliant underglaze-blue decoration of the Asian porcelains in his collection. And so, a prize of 1,000 thaler was to be awarded to whomever could solve the complex issues of firing blue under the glaze. In 1720, the arcanist David Köhler (1683-1723) succeeded in overcoming these issues by adapting the porcelain paste. Köhler had come to Meissen from Freiberg and by 1704 was working with Johann Friederich Böttger in the Albrechtsburg at Meissen. Following Böttger's death in 1719, he was appointed to the position of factory Obermeister. It was at this same time that he also embarked upon the experimental work that would ultimately result in the factory's ability to successfully produce the underglaze-blue decoration on Meissen porcelain that Augustus the Strong so desired.

The King's appetite for blue and white porcelain is perhaps best presented in the infamous exchange in April and May of 1717 in which Augustus acquired 151 Chinese blue and white pieces owned by Frederick William I of Prussia (90 pieces from Schloss Oranienburg, and 61 from the Schloss Charlottenburg), in exchange for 600 mercenary soldiers from his own army. Eight years previously in 1709 he visited Berlin with his uncle King Frederik IV of Denmark to celebrate the alliance of Saxony–Poland–Lithuania, Denmark, and Russia against Sweden. Between July 2nd and 8th the King stayed in Postdam, Schloss Caputh and Oranienburg, and until the 16th at Charlottenburg, Berlin. It is probable this extraordinary meeting was his first encounter with a blue and white Porzellankammer (Porcelain Room).

In the 1770 inventory of the Japanese Palace, blue-and-white Asian porcelains, including the legendary ‘Dragoon vases', are found in section V, titled “Blau- und weiß- Indianisch Porcelain, worunter sich Krack mit befindet: Dieses Porcelain ist met den Signo her bezeichnet ^^^^". In the 1733 listings of porcelain for the expanded palace, rooms 5, 6, 10 and 11 on the ground floor were devoted to Asian blue-and-white described as “Indianisch.” On the upper floor, which featured only Meissen porcelain, the Long Gallery with the glockenspiel at one end and the throne at the other, both under baldachins, was earmarked for porcelain described as “Weiß, so nach Alt. Indians. Arth.” Accordingly, "Indianisch” is easily understood to mean Meissen decorated in blue and white. Indeed, the greatest numbers of Meissen vases to survive from the 1720s are in blue-and-white and more than 1000 vases were specified in the orders, while the other rooms of Meissen would feature between 100 to 400 vases.

Two vases of this form and decoration remain in the Porzellansammlung, Dresden, inv. nos. PE 2219/20, one of which is illustrated in Meissener Blaumalerei aus drei Jahrhunderten, exhibition catalogue, 1989, p. 144 and 190, nr. 34.

By 1927, the Oppenheimers owned three further underglaze-blue Augustus Rex vases, comprising a pair of monumental baluster vases and a single vase (64.5 and 64.8 cm) (Schnorr von Carolsfeld, 1927, nos. 38-40). One of the pair (no. 39) is now in the Gutter Collection, attributed to painter Johann Caspar Ripp, illustrated in Santangelo, op. cit., pp. 90-91, no. 23. According to the catalogue entry, this vase was possibly sold by Mannheimer, along with other duplicates and pieces deemed lacking in quality or condition, between the time he acquired the collection in 1936 and his death in 1939. Indeed the vase, which has a reduced neck, was not photographed with the pair in 1927. Prior to the Gutter Collection, the vase was in the Frederick J. and Antoinette H. Van Slyke Collection, Baltimore, Maryland, sold, Sotheby's New York, September 26, 1989, lot 3. The pairing vase (no. 38) was sold in the Mannheimer sale, Frederik Muller & Cie, Amsterdam, October 14-21, 1952, lot 285. The single vase (no. 40), also likely painted by Ripp, is illustrated in Ernst Zimmermann, 1926, taf. 9, but by 1952 was badly damaged, and was sold together with the previous vase in the same lot.