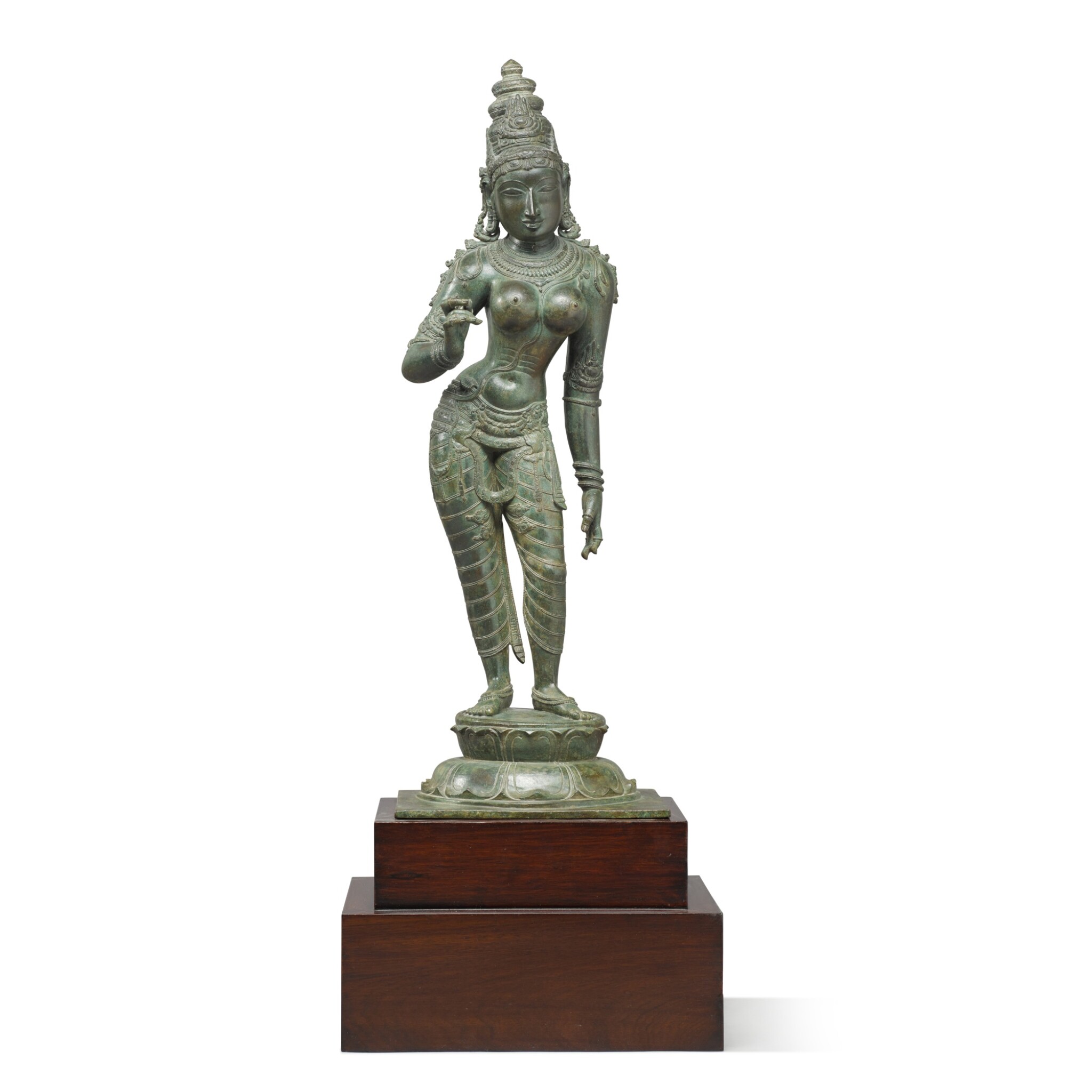 the sensuously cast goddess depicted standing in tribhanga on an elaborate double lotus base, her pendent left hand in lolamudra, right hand raised in katakamudra, the rounded face with full lips, Grecian nose and almond-shaped eyes underscored by arched eyebrows, wearing a decorative band around the forehead and crown around her mounted conical shaped hair, adorned with armbands, bracelets and a broad beaded necklace and a meditation strand falling between her sumptuous breasts, adorned a dhoti patterned with rosettes and secured with a beaded belt and decorated with a flourishing sash fastened in a loop to the left hip

Good overall condition. There is extensive oxidation to the surface and minor areas of bruising, including the base and the wheel on the reverse of the head.

The Sensuous Immortals. A Selection of Sculptures from the Pan-Asian Collection, Los Angeles County Museum of Art, Los Angeles, 1977, cat. no. 66c.

Parvati, the goddess of the Himalayas, is the archetypal mother goddess and fertility image. Referred to as Uma in South India, she is the consort of Shiva and the mother to Ganesha and Skanda. This superbly cast and superbly sensual sculpture would have originally been placed inside a temple and carried in a religious procession so that devotees could see and engage with the deity.

In the Hindu religion, fertility goddesses were an important component of early Indian nature cults, eventually assimilated into the symbolic repertoire of late Indian religious art. The prototype for the female torso was the damaru, the waisted hourglass-shaped drum held by the god Shiva. Closely adhering to the models specified in ancient texts, the master sculptors of the Chola and Vijayanagar period created an idealised female form with narrow waist, broad hips, high, sumptuously rounded breasts and shapely arms elongated to resemble the slender pliant bamboo shoot, and eyes modelled on the lotus petal or the fish. These young, beautiful, sensuous figures personify fertility, maternity, and Indian ideals of feminine beauty.

The current sculpture encapsulates this archetypal image of the female, embodying the fullness of femininity which includes both sacredness and sensuality. The style of this bronze, deriving directly out of the Chola dynasty bronzes, culminates into a standarised form as it develops within the Chola dynasty and into the Vijayanagar period. In his discussion of the current sculpture in The Sensuous Immortals. A Selection of Sculptures from the Pan-Asian Collection, Cambridge, Massachussets and London, 1977, p. 113, Pratapaditya Pal describes how the naturalism of the early style "has given way to a more mannered elegance." During this transition, gestures become more exaggerated, modeled and stylised. Here, the breasts are overly rounded, the protruding hip accentuated and the facial features, particularly the nose, prominent.

Another copper alloy figure of Parvati, probably created from the same workshop, of identical form and with the same precise treatment of the sumptuous body, coiled hair, jewellery and other distinct features, is preserved in the Art Institute of Chicago, accession number 1961.776, dated to circa 1500. See also a closely related copper alloy figure of Parvati from the Vijayanagar period, from Ambavanodai and now in the Government Museum, Chennai, is illustrated in Rustam Jehangir Mehta, Masterpieces of Indian Bronzes and Metal Sculpture, Taraporevala, 1981, pl. 75, and another in the Kimbell Art Museum, accession number AP 1969.13. An earlier depiction of Parvati from the Chola period, sold at Christie’s New York, 20th March 2007, lot 257, from the estate of Thomas T. Solley, was published by the distinguished scholar and collector Stuart Carey Welch in India, Art and Culture, New York, 1985,pp. 27-29, with an evocative description that applies equally to the current superb example:

"No one could deny the immense artistic and human appeal of this masterfully cast, crisply modelled and chased sculpture, with its sweetly compelling expression, superbly lissome yet ample figure, luxuriantly sinuous jewelry and coiffure, and costume vibrant with form-hugging folds. Late as it may be within South India's tradition of bronze casting, this is a powerful and movingly feminine envisionment of Shiva's consort Parvati, who represents generic woman - shakti, the tangible and noblest form of cosmic divine power - and is the benign aspect of Kali. Although as a tool for meditation (dhyana) the goddess could have been represented in other worshipful forms, she is embodied here as a stunning figurative image, a pratima. A devotee who is sufficiently pure in heart and able to take power from within can through the image's suprasensual beauty achieve the goal of worship: samadhi, or the merging of the perceiver with the perceived. At a yet higher spiritual level, this union of the divided divine can be affected without the image, by envisioning it in the mind's (or soul's) eye.

According to Tantric philosophy (as more widely practised in the north in medieval and post-medieval India), it is also possible to attain such release through worshipping a living woman, a human image: 'On a Friday [the worshipper] is to invite and summon a beautiful maiden pleasing to the eye, in the bloom of youth of great charm bedecked with all the auspicious symbols... and past puberty. He is to cleanse her body with bathing and ointments and place her upon the ceremonial seat. He is to adorn her according to the instructions, with perfumes, flowers, garments, and ornaments, and following this, adorn himself as well with ointments, flowers, and so forth. He is to install the deity into the maiden and offer her sacrifices through the ritual of touching. Once he has worshipped her in the proper ritual sequence, and sacrificed incense and candles to her... in his belief that she is the deity, he is to delight her, in in his loving devotion, with things to eat, each of which possesses one of the six types of flavors, with meat and other foods and sweetmeats. When he sees her delight at its peak, he is to utter the Goddess' sacred formula, himself filled with the joy of youthful vigor, and his thoughts totally immersed in the ritual image of the deity. Once he has with unwavering attention offered up to her the spoken formula, among other things, one thousand and eight times, let him pass the night with her. Whoever worships in this way for three, five, seven or nine Fridays receives benefits beyond measure deriving from his piety."

The current sculpture was originally in the collection of Dr. J. R. Belmont (1896-1981), a visionary collector from Basel, Switzerland, who amassed one of the pre-eminent collections of Indian sculpture and miniature paintings in the 1950s. From 1960-70, part of the Belmont collection, including the present work, passed into the care of the Pan-Asian Collection formed by the New York-based French collector Christian Humann (1924-1981), and was acquired in 1982 by Robert H. Ellsworth, the legendary connoisseur and dealer, who sold it to Sir Joseph.