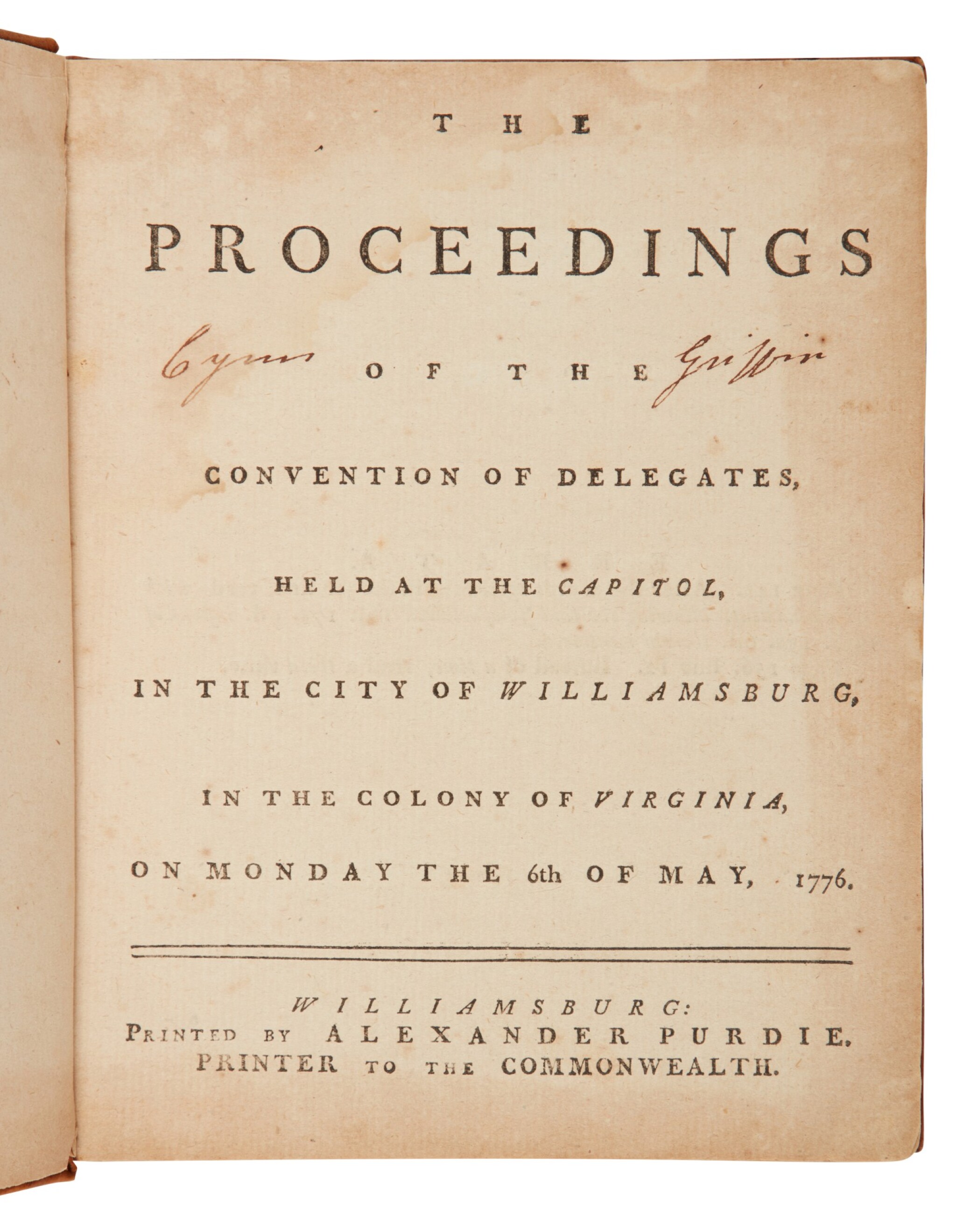 2 works bound in one volume, 4to (208 x 162 mm, deckle preserved on many lower edges of Ordinances). Some browning throughout. Contemporary reverse calf, covers ruled and rolled in blind, spine lettered in ink "Journal of Convention 1776," possibly by Capt. J. H. B. Smith (see Provenance); extremities rubbed, hinges a trifle cracked with a little loss to front hinge. Blue morocco folding-case.

First editions, with significant provenance, of the Proceedings and Ordinances of the fifth Virginia Convention at Williamsburg in May and June 1776, containing the Virginia Declaration of Rights, one of the most important and influential documents in American history.

The Proceedings also publishes the momentous resolution of 15 May 1776 "that the delegates appointed to represent this colony in the General Congress be instructed to propose to that respectable body to declare the the United Colonies free and independent States. …" This resolution, introduced by Richard Henry Lee to the Continental Congress on 7 June 1776 —just two days after the adjournment of the Virginia Convention—led directly to the appointment of a committee to draft the Declaration of Independence.

Covering the crucial period from 6 May to 5 July 1776, the Proceedings describe an integrated series of events and decisions, including the adoption of Virginia's Constitution—in which the state separately declared independence—and the election of Patrick Henry as the state's first governor. "When the convention adopted the new constitution on June 29, 1776, it transformed Virginia's political landscape by giving the people an unprecedented role in running their government" (CCC, p. 40). But the Virginia Declaration of Rights is the cornerstone of the Virginia Convention.

"Written primarily by George Mason and adopted on June 12, 1776, the Virginia Declaration of Rights comprised, in the words of historian Gordon S. Wood [in The Creation of the American Republic], 'a jarring but exciting combination of ringing declarations of universal principles with a motley collection' of more specific legal customs that Americans had long prized. It began by stating that 'all men are by nature equally free and independent' and that 'all power is vested in, and consequently derived from, the people.' Because of this, 'a majority of the community hath an indubitable, inalienable, and indefeasible right to reform, alter, or abolish' their government whenever they deemed the current one 'inadequate.' The similarity between these phrases and those found in the Declaration of Independence was no coincidence. Jefferson eagerly drew on Mason's drafts as he composed his own text in Philadelphia. … Importantly, the Declaration of Rights did not grant the people their rights but rather guaranteed them. Since all power came from the people, their rights were not limited to what they chose to emphasize and write down at this particular moment" (CCC, pp. 37, 40).

The sixteen points of the Declaration of Rights also allowed for the separation of the executive, legislative, and judicial branches of government; frequent free elections; elimination of hereditary offices; the right to trial by a jury of one's peers; reasonable bail; no cruel or unusual punishment; reasonable warrants for searches; freedom of the press; subordination of the military to civil authority; and freedom of religion. This final clause was introduced by James Madison: "That religion, or the duty to which we owe to our Creator, and the manner of discharging it, can be directed only by reason and conviction, not by force or violence; and therefore, all men are equally entitled to the free exercise of religion, according to the dictates of conscience; and that it is the mutual duty of all to practice Christian forbearance, love, and charity, towards each other." According to Lance Banning, Madison's contribution to the Declaration of Rights established "a standard that no society had ever recognized in its organic law" (ANB).

The Ordinances Passed at a General Convention of Delegates and Representatives also includes the texts of the Virginia Declaration of Rights and Virginia Constitution. Both publications are very scarce on the market, with about a dozen copies of each being held in institutional collections. Only William & Mary, the Huntington, John Carter Brown, the Library Company of Philadelphia, the New York Public Library, and the Library of Virginia have copies of both imprints. We find only one other copy of the works together and one copy of the Ordinances separately in the auction records for the past five decades.

This set of the two works is signed on the title-page of the Proceedings by Cyrus Griffin, a Virginia attorney who was in private practice in 1776. In 1778, Griffin was chosen, with James Madison, as one of Virginia's delegates to the Continental Congress, serving until 1781. He returned to Congress in 1787–1788, serving as the last President of the Congress under the Confederation from January to November 1788, when the Confederation Congress adjourned in favor of the new federal government. Griffin subsequently held various government posts, finally serving as a judge in the U.S. District Court for Virginia from 1790 until his death in 1810.