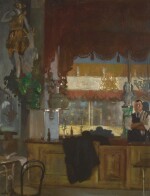 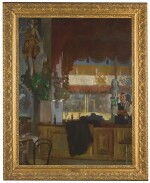 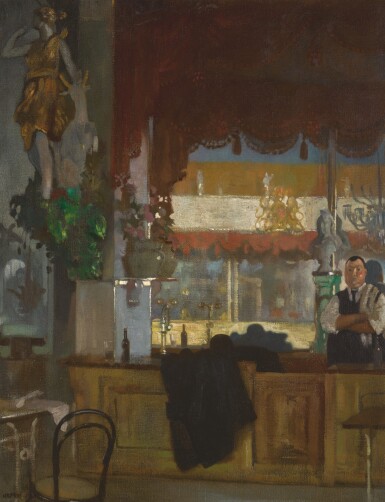 THE BAR IN THE HALL-BY-THE-SEA, MARGATE

Original canvas. The work has benefited from a recent clean (it is brighter than it illustrates in the printed catalogue illustration) and appears in very good overall condition with minimal intervention in the past. A restoration report from Hamish Dewar Ltd advises that the painting would benefit from a strip-lining at some stage but is currently stable.

Ultraviolet light reveals an opaque varnish which makes the surface difficult to read conclusively. There appears to be some occasional and minor spots of retouching to isolated parts of the canvas.

Purchased from the above by Hunter's Gallery, Dublin, where purchased by the father of the present owner c.1947 and thence by descent

William Orpen’s oeuvre consists of many exceptional interior paintings that demonstrate his keen sense for composition, atmosphere and his aptitude for rendering decorative elements. The complexities of the present subject would have proved too demanding for many artists but with Orpen’s sure eye and brushwork, the painting richly evokes the fading glamour of the The Hall-by-the-Sea in Margate. Orpen picks out the ornate details of the bar with flashes of light, from the mirrors and bar taps to the sculpture up high in the foreground. Framed to the right of the painting is the barman, arms-folded and staring directly out. Orpen’s presence himself is suggested in the long coat and hat which rest on the bar, with a bottle and glass to the left.

The occasion to paint the present work arose when Orpen and William Nicholson travelled with their families to the popular seaside resort of Margate, most likely in the spring of 1908. It was Max Beerbohm who had introduced William and Grace Orpen to William and Mabel Nicholson in about 1903, and the couples soon became firm friends, with Orpen even allowing Nicholson to share his studio. The Nicholsons are the subject of Orpen’s A Bloomsbury Family (1907, National Galleries of Scotland).

The Hall-by-the-Sea occupied a disused railway station and was turned into an entertainment complex by ‘Lord’ George Sanger in 1874. It comprised a ballroom, concert hall, promenade, Italian ornamental gardens and, by the time of Orpen’s visit, the vestiges of a zoological garden, which had been closed in 1905. A contemporary description of the Ballroom gives a sense of its opulence: ‘Approached through an avenue of glittering glass, the entrant comes to … a commodious entrance lobby and vestibule. This leads directly into the grand ballroom, one of the largest and most handsomely decorated public dancing-rooms anywhere within hundreds of miles… The front of the orchestra is bas-relief panels of the Muses. Along the whole extent of the long ballroom are massive mirrors, over which are arched gas jets, with coloured glass globes, alternating between red, white, green, and pale yellow. Between each mirror has been placed a carved truss, reaching from the floor nearly to the ceiling, the pedestal top of which is ornamented with trailing plants, and on which stands a life-size gilded statue, surrounded with palms and tropical vegetation.’ (The Era, Saturday 30th July 1898).

The mock, somewhat gaudy, splendour of the mirrored Grand Ballroom, with its bar’s mirror backing, naturally piqued the interest of the both Orpen and Nicholson; Orpen, with his fascination with the properties of mirrors, and Nicholson with his predilection for surface reflections. In addition to the current work, Orpen is known to have painted at least one other, exhibited under the title of The Grand Hall-by-the-Sea, Margate or The Hall-by-the-Sea, Margate, dated 1908 (untraced). In Nicholson’s example, The Hall-by-the-Sea (1909, Private Collection), he offers a view of the Ballroom looks south, down from the entrance, towards the bar and the concert room beyond. The inclusion of the Thonet bentwood chairs, and a canopy over the bar area, in both of the artists’ pictures, links the two works. As no image has been found, it is not known exactly how Orpen tackled his untraced, Grand Hall-by-the-Sea picture, but the current work possibly owes something to Édouard Manet’s A Bar at the Folies-Bergère, 1882 (The Courtauld Gallery, London).

The Ballroom also would have had resonance for both artists with the mirrored ‘Domino’ Grill Room of the Café Royal, London; a haunt they both frequented. The present work may also have been a precursor to Orpen’s celebrated Café Royal, (Musée d'Orsay, Paris) painted in 1911-1912, a conversation piece, largely comprised of a group of artists including William Nicholson and Augustus John.

After George Sanger's death in 1911, the Hall-by-the-Sea continued to be run by his daughter, and his son-in-law, Arthur Reeve. However, in 1919 it was purchased by John H. Iles who developed the site as 'Dreamland' amusement park, which is still in existence. The park has had many owners and reincarnations over the years, and today nothing of the splendid ballroom of Orpen’s day still exists except perhaps the shell.

We are grateful to Dominic Lee for his kind assistance with the cataloguing of the present work. For further information, visit sirwilliamorpen.com