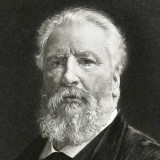 Born 1825. Died 1905.
Interested in selling a work by William-Adolphe Bouguereau?
Request an Estimate

Works by William-Adolphe Bouguereau at Sotheby's

Working predominantly within the academic tradition, William-Adolphe Bouguereau earned a strong reputation in his lifetime as a painter of classic subjects, primarily that of the female nude, but his posthumous critical standing has often stood in contrast to his living success. Born in 1825 on the south west coast of France, he studied painting sporadically throughout his childhood before moving to Paris at the age of twenty to formally study under François-Édouard Picot, an established painter who worked in the neoclassical tradition. Later, he was admitted to the École Royale des Beaux-Arts, and by 1850, after two failed attempts, Bouguereau was awarded the Grand Prix de Rome prize. The prize included a full scholarship to the French Academy in Rome, where he would begin study the following year.

Following his tenure in Rome, he returned to his hometown of La Rochelle where his career fully flourished. He earned consistent critical praise, was exhibited in numerous Salons, and accrued seemingly endless commissions. He maintained the Neoclassical style that he had developed through his years of training, which appealed greatly to bourgeois patrons; his popularity grew so much that it attracted the attention of Emperor Napoleon III, who commissioned him for a portrait in 1856. His success was unremitting in his lifetime, and he was made a member of the French Academy in 1876, and made a Commander of the Legion of Honor in 1885. His influence ultimately spread beyond just France, and he became an active participant in artist societies in Austria, Belgium and Spain.

Unfortunately, after Bouguereau’s death in 1905, his reputation faltered considerably. By the turn of the 20th century, although still lauded by the Academy and other academic institutions, his style was eclipsed by the avant-garde approaches that would come to overshadow academic modes. A degree of interest for Bouguereau’s work reemerged in the later 20th century, however, with museums in New York and Paris mounting exhibitions of his painting; further, academicians began reconsidering his oeuvre, and he was the subject of several monographs. Despite changing tastes, his work stands as an important moment in art history, and as such holds a rightful place in several major museum collections, such as the Musée d’Orsay, Paris; the J. Paul Getty Museum, Los Angeles; and the Detroit Institute of Arts.

Museums with Works by William-Adolphe Bouguereau