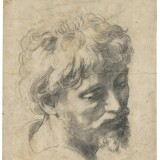 Born 1483. Died 1520.
Interested in selling a work by Raphael?
Request an Estimate

Works by Raphael at Sotheby's

A leading figure of the Italian High Renaissance, Raphael is known for his consummate expressions of the era’s Neoplatonic ideals. Effortlessly graceful and sublimely harmonious, his paintings marry serenity, beauty and clarity of form with authentic emotionality. His richly colored, perfectly balanced compositions, widely considered the pinnacle of technical achievement, have inspired rhapsodizing praise: the Russian novelist Fyodor Dostoevsky proclaimed his work “the greatest revelation of the human spirit,” while Pablo Picasso declared, “Leonardo da Vinci promises us heaven. Raphael gives it to us.”

Born Raffaello Sanzio in 1483, he grew up in Urbino, Italy and received his first artistic instruction from his father, the painter Giovanni Santi. Around 1500, Raphael began apprenticing with the Umbrian master Pietro Perugino, and in 1504 he moved to Florence, where he studied the works of Leonardo da Vinci and Michelangelo. Around this time, he began his first important series of Madonna paintings. In 1508, Raphael was called to Rome by Pope Julius II to complete a cycle of frescoes for the papal apartments. The Stanze, known collectively as the “Raphael Rooms”, are regarded as one of the crowning achievements of the High Renaissance, and include the Stanza della Segnatura’s iconic School of Athens (1509-1511). Numerous other commissions followed, including the Sistine Madonna (1512)—the last and certainly most influential of his Madonna paintings—and the Triumph of Galatea (1514). He also produced a number of uncommissioned works, including La Fornarina (1520), an exquisitely beautiful depiction of the great love of his life, Margherita Luti. Raphael died in 1520 at the age of 37, leaving behind a final unfinished masterpiece, The Transfiguration (commissioned in 1517), a culminating work prefiguring both Mannerist and Baroque painting.

Today, Raphael’s paintings can be viewed in preeminent collections around the world, including the National Gallery in London; Louvre in Paris; Hermitage Museum in St. Petersburg; Rijksmuseum in Amsterdam; Museo del Prado in Madrid; Uffizi Gallery in Florence; and Metropolitan Museum of Art in New York.