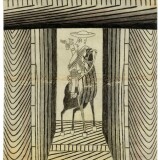 Works by Martin Ramirez at Sotheby's 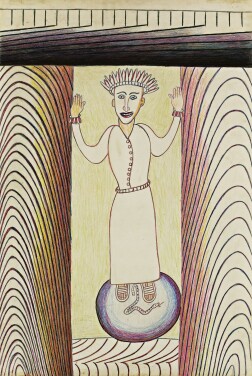 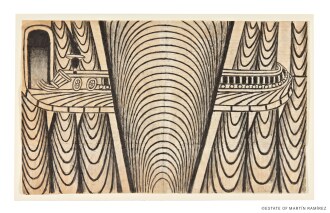 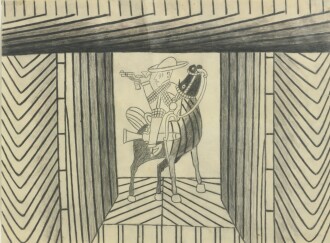 Recognized as one of the 20th century's self-taught masters of drawing, Martín Ramírez spent most of his adult life institutionalized in California psychiatric hospitals under a possibly invalid diagnosis of dementia praecox. There, Ramírez used whatever materials were close at hand – brown paper bags, scraps of exam table paper, pencil stubs, burnt matches – to make drawings and collages of tightly oscillating lines, forming tunnels, plumes and other ornamental forms. These often served as involuted passageways for chugging locomotives (like those he worked on before his confinement) and at other times drew upon Mexican folklore, Catholic iconography and personal memory.

Martín Ramírez was born on January 30, 1895 in Rincón de Velázquez, Tepatitlán, Jalisco, Mexico. He migrated to California to find work, leaving behind a pregnant wife and three children. He worked on the railroads and in the mines between 1925 and 1930, before becoming unemployed and homeless. In 1931, he was detained by the police and remanded to the Stockton State Hospital. In 1948, he was moved to the DeWitt State Hospital near Sacramento, where he began making drawings and collages. A visiting artist and psychology professor, Tarmo Pasto, recognized Ramírez's talent and saw to it that he was furnished with materials and a dedicated workspace; he also sent several of his drawings to the director of the Guggenheim Museum. Nevertheless, Ramírez's work went largely unrecognized until long after the artist's death at DeWitt on February 7, 1963. A decade later, a selection of pieces from Pasto's collection were presented at a gallery show in Chicago, and in 2007, the American Folk Art Museum in New York City held a major retrospective of over 100 works. In 2015, Ramírez became the first Mexican-American artist to be featured on a U.S. Stamp.

Ramírez's pieces can be found in numerous prominent public institutions, including the Smithsonian American Art Museum in Washington D.C., the Milwaukee Art Museum, and the Museum of Fine Arts in Bern.