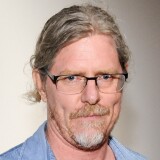 Born 1968.
Interested in selling a work by Mark Grotjahn?
Get an Estimate

Works by Mark Grotjahn at Sotheby's

The work of American painter and sculptor Mark Grotjahn engages with the technical approaches of Renaissance paintings, the geometric abstraction of early 20th century Futurism, and the expressive paintings of Color Field artists. Born in Pasadena, California, in 1968, Grotjahn completed his BFA at the University of Colorado at Boulder, and his MFA at the University of California, Berkeley. Beginning in the 1990s, Grotjahn experimented with the conventions of perspective through works that present abstract vanishing points and exaggerated orthogonal lines as central subjects. After a skiing accident in 2008 that injured his rotator cuff and shoulder bone, Grotjahn had to alter his painting technique, and has since turned to explorations of facial structures in paintings and sculptures which he builds through layers of pigment or bronze casting from cardboard models.

Grotjahn received the 2003 Penny McCall Foundation Award, and the 2011 Award of Excellence for Artistic Contributions to the Fight Against Aids from The Foundation for AIDS Research. He has served as artist trustee on the board of the Museum of Contemporary Art, Los Angeles, since 2014. Grotjahn has cultivated impressive stature in the art market through a savvy understanding of the art world, by mediating many of the sales of his works, directing the timing and details of exhibitions, developing waiting lists for his works, and at times bypassing dealers by selling directly to collectors. He is represented by four major galleries including Gagosian and Anton Kern and has strategically avoided the common practice of exclusivity agreements.

His works have sold for increasingly higher prices. He sold one of his first painting for $1,750 in 2000, and has ingeniously and consistently captivated collectors over the last two decades; Untitled (Black Over Red Orange "Mean As A Snake" Face 842) sold at Sotheby’s for $7.1 million in 2018. His works can be found at the Museum of Modern Art, New York; the Museum of Contemporary Art, Los Angeles; the Carnegie Museum of Art, Pittsburgh; the Whitney Museum of American Art, New York; and many other major American and international institutions.

Museums with Works by Mark Grotjahn

Artist Image: 2013 Getty Images
Please note that prior performance of the indexes and realized returns contained herein does not guarantee future results. In addition, there is no guarantee that random collections of individual works of art or stocks will yield index returns. We are not financial advisors and we are not in the business of recommending art as an investment. We also have no comparative advantage in forecasting the future direction of the art market. Investment decisions should be based on the risk return tolerance and time horizon of the investor with, if desired, the support of a licensed financial advisor. This information is provided "as is" and with no representations or warranties either express or implied of accuracy, merchantability, fitness for a particular purpose or of any other nature are made with respect to this information or to any expressed views presented in this information.