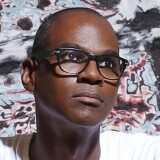 Born 1961.
Interested in selling a work by Mark Bradford?
Get an Estimate

Works by Mark Bradford at Sotheby's

The multimedia artist Mark Bradford was born in 1961 in Los Angeles, California, and was raised predominantly in the area known as South Central, where his mother worked as a hairdresser. Even after his family relocated to Santa Monica when he was 11, he continued to spend a great deal of time in the neighborhood, as it was where his mother’s business was located. Bradford’s proclivity for art manifested at a young age, and some of his earliest experiments with art – which in many ways foreshadowed his later, mature work – utilized materials he found around his mother’s place of work, hairdressing materials such as bobby pins, hair dye and perm endpapers. Despite this, it was not until Bradford was in his early 30s that he undertook formal study at the California Institute of the Arts, Valencia, where he eventually received his BFA in 1995 and his MFA in 1997.

Bradford’s oeuvre today has come to include a multitude of mediums, including photography, printmaking and installation. He is perhaps best known for his utilization of found materials in abstract collage works that are both indicative of a specific time and place, as well as a form of social and political commentary. In 2017 Bradford was chosen to represent the United States at the Venice Biennale, where he used cellphone ads to create the effect of a ruin in the grand rotunda. Harkening to his oeuvres overarching themes of political critique, he commented on his installation, saying, “I wanted it to feel like a ruin, like we went into a governmental building and started shaking the rotunda and the plaster started falling off. Our rage made the plaster fall off the walls.”

Today, Bradford continues to live and work in Los Angeles, near where he initially grew up and where he co-founded the art and social services space Art + Practice, which opened in 2014. His work is included in a number of prestigious museum collections worldwide, including the Museum of Modern Art, New York; Hirshhorn Museum and Sculpture Garden, Washington, D.C.; Tate Modern, London; and Centre Georges Pompidou, Paris.

Museums with Works by Mark Bradford

Artist Image: 2015 Jay L. Clendenin
Please note that prior performance of the indexes and realized returns contained herein does not guarantee future results. In addition, there is no guarantee that random collections of individual works of art or stocks will yield index returns. We are not financial advisors and we are not in the business of recommending art as an investment. We also have no comparative advantage in forecasting the future direction of the art market. Investment decisions should be based on the risk return tolerance and time horizon of the investor with, if desired, the support of a licensed financial advisor. This information is provided "as is" and with no representations or warranties either express or implied of accuracy, merchantability, fitness for a particular purpose or of any other nature are made with respect to this information or to any expressed views presented in this information.