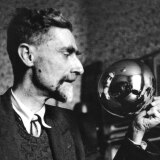 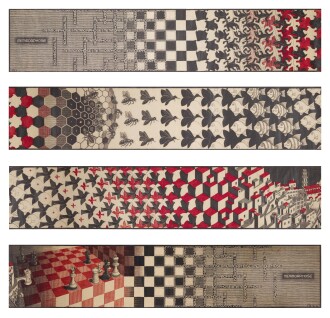 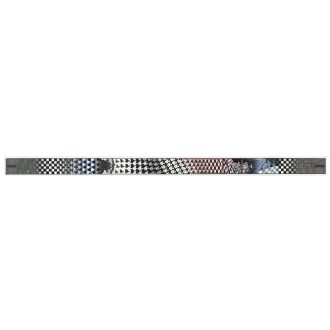 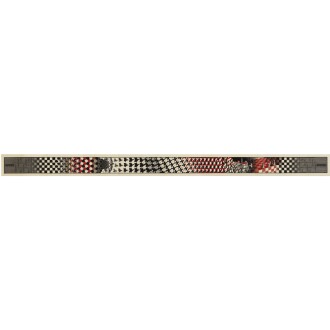 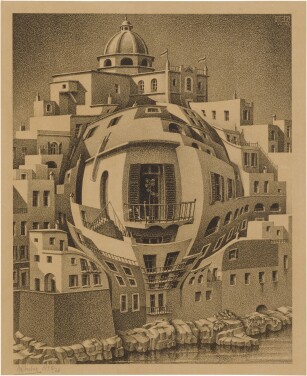 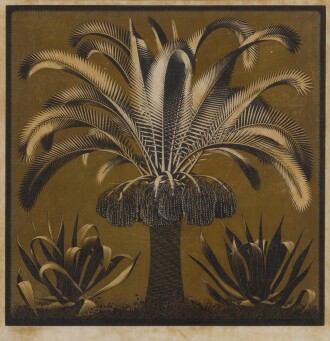 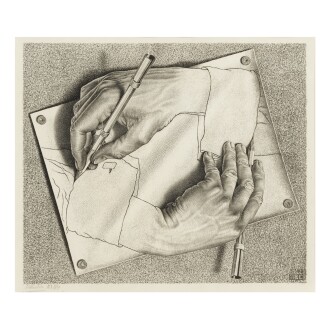 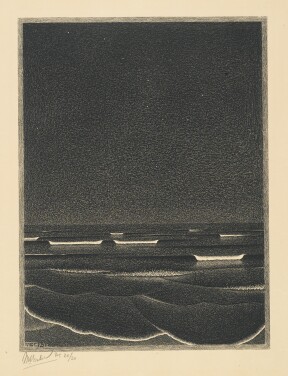 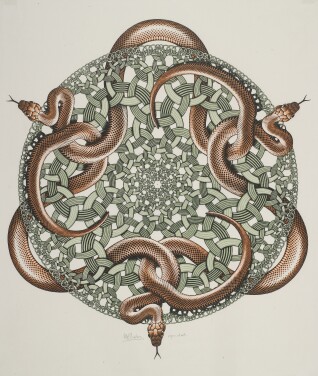 The Dutch printmaker M. C. Escher (born Maurits Cornelis Escher on 17 June 1898, in Leeuwarden) worked in numerous mediums, but is perhaps best known for his use of the woodcut and lithography, as well as his creation of highly realistic images that often contain both optical and conceptual effects. Although Escher was not a strong student, he studied between 1919 and 1922 at the School for Architecture and Decorative Arts in Haarlem, where he acquired a deep interest in graphic art.

Early in his professional career, Escher produced prints mainly of landscapes, both urban and rural, which were striking but largely naturalistic. By the 1930s, however, he began to embrace what he described as “inner vision,” a stylistic mode that employed intricate designs featuring repeated, stylized figuration. Such compositions have come to be most closely related to Surrealism, and are Escher’s most recognizable works. Perhaps his most famous of these, Ascending and Descending, 1960, depicting a series of staircases that seem to both go up and down simultaneously, has drawn attention from both artistic and mathematical communities; it was shown at the International Mathematical Congress in Amsterdam in 1964. Works like this, featuring impossible architectural spaces and surprising transmutations of objects, have continuously drawn the public’s interest, and as such have been widely collected; the National Gallery of Artin Washington, DC, currently has the largest collection of Escher’s work outside of the Netherlands.

M. C. Escher continued to work until late in life, moving to an artist’s retirement home where he had his own studio in 1970. He died in 1972.

Type: museum
The Museum of Modern Art
New York, New York | New York
Type: museum
The Metropolitan Museum of Art
New York, New York | New York
Type: museum
Smithsonian American Art Museum
Washington, DC
Type: museum
National Gallery of Art, Washington
Washington D.C.
Type: museum
Museum of Fine Arts, Boston
Boston, Massachusetts | Massachusetts
Type: museum
Princessehof Ceramics Museum
Leeuwarden
Type: museum
Escher in the Palace
The Hague
Type: museum
National Museum of Mathematics
New York, New York | New York
Type: museum
San Jose Museum of Art
San Jose, California | California
Please note that prior performance of the indexes and realized returns contained herein does not guarantee future results. In addition, there is no guarantee that random collections of individual works of art or stocks will yield index returns. We are not financial advisors and we are not in the business of recommending art as an investment. We also have no comparative advantage in forecasting the future direction of the art market. Investment decisions should be based on the risk return tolerance and time horizon of the investor with, if desired, the support of a licensed financial advisor. This information is provided "as is" and with no representations or warranties either express or implied of accuracy, merchantability, fitness for a particular purpose or of any other nature are made with respect to this information or to any expressed views presented in this information.