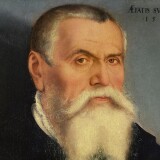 Born 1472. Died 1553.
Interested in selling a work by Lucas, The Elder Cranach?
Request an Estimate

Works by Lucas, The Elder Cranach at Sotheby's

Painter and printmaker Lucas Cranach the Elder is considered one of the most historically significant German painters, and a canonical figure within the context of 16th century art. Perhaps most well known for his altarpieces and portraits, as well as his idiosyncratic and stylistic elongation of forms, his oeuvre is predominantly composed of biblically themed motifs as well as portraits of leading members of the Protestant Reformation.

Cranach was born as Lucas Müller in 1472, but later took the name of his birthplace Kronach. His father was an artist, and most likely was the first to train him. Not much is known about the artist’s early life, and his earliest confirmed work is from approximately 1502, which falls during the years between 1501 and 1505 when he was living in Vienna and already in his thirties. The substantial amount of work he made during this period, a combination of paintings as well as woodcuts that appear to be greatly influenced by his contemporary Albrecht Dürer, is notable for its exceedingly high quality and skill level.

Shortly after leaving Vienna, Cranach was given a position at the court of Friedrich the Wise, Elector of Saxony, at Wittenberg—through his position he came to produce numerous murals, paintings, and other various decoration for the ducal residences throughout the region. Although none of the murals are extant today, a number of his altarpieces and smaller compositions have survived, and help illustrate his career trajectory. Cranach often included details of particular places in his work, such as Netherlandish garb following a visit to Antwerp, or a distantly seen view of the castle of Coburg while living in Wittenberg, helping historians date works and gain a better understanding of the artist’s movements.

During his long career, Cranach also established a large workshop with his two sons, which was staffed by numerous apprentices and assistants. Hundreds of paintings have been attributed to this studio, and in-depth study of these works and their identifying signatures has been undertaken to distinguish which works were completed by Cranach’s own hand, or that of his children.

A common theme throughout the artist’s work is that of the Protestant Reformation, a religious movement that he was closely associated with in his lifetime—he was friends with Martin Luther, whom he and his studio completed numerous portraits of along with portraits of Luther’s family and other members of the Reformation. Despite his close associations with the movement, it did not deter Cranach from completing commissions for the Reformation’s adversary Cardinal Albrecht von Brandenburg, as well as more secular, even mythological, works meant for a more general audience.

Cranach’s diverse (if only for his time) and prolific output secured his position both financially and socially, a position he enjoyed up until his death in 1553. Through changing tastes and political trends, Cranach and his work have come to be recognized as a seminal facet of art history; consequently, his work today is housed in many significant museums worldwide, such as the J. Paul Getty Museum, Los Angeles; Metropolitan Museum of Art, New York; Louvre Museum, Paris; and State Hermitage Museum, St. Petersburg.

Museums with Works by Lucas, The Elder Cranach