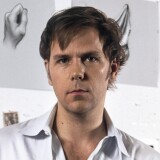 Born 1962.
Interested in selling a work by John Currin?
Request an Estimate

Works by John Currin at Sotheby's

Combining classical painting techniques with contemporary satire and pop culture based subject matter, John Currin has produced a body of work that is nearly as influential, if not at times controversial, as it is uniquely recognizable. Born in 1962 in Colorado, Currin was raised from the age of ten in Connecticut. At 14 he began studying painting with the classically educated painter Lev Meshberg, who introduced the young Currin to traditional studio and painting methods—methods that would eventually prove to be foundational in his practice. Currin went on to earn his BFA in 1984 from Carnegie Mellon University, and subsequently his MFA from Yale University in 1986.

While studying at Yale, Currin became closely acquainted with several fellow artists, including Sean Landers, whom he would later cite as an inspiration for discovering his own personal style. At the time, his graduate school works portrayed figuration through intuitive, vigorous brushwork similar to that used by the Abstract Expressionists. He saw in his work an “attempt to be a tortured artist,” and he adjusted his approach both thematically and technically. His painting moving forward became caricature-like in modeling and increasingly thematically light-humored. As his style matured, he began drawing more directly from source-material that bordered on the obscene and grotesque, including hard-core pornography and Playboy, and presented these subjects within the scope of traditional fine art—for instance depicting an explicit sex act within the context of a Dutch Golden Age style still life.

In 1994, Currin met his now wife, the artist Rachel Feinstein, who has modeled for numerous of his works. Currin has credited Feinstein with his ability to incorporate “cheerfulness” consistently in his work, despite it being a departure from many popular styles and movements. Today, they both continue to live and work in New York City, and are considered one of the cities leading art world “power couples.”

Currin’s career has been consistently successful; he began exhibiting with the influential Andrea Rosen Gallery in the early 1990s, and joined the famous Gagosian Gallery in the early 2000s. Although his work has garnered a fair amount of controversy and criticism (namely due to his depiction of explicit sexuality and young girls in states of undress), his paintings have still become extremely popular both in the art world and in popular culture—in 2017 Vogue commissioned him to complete a portrait of Oscar winning actress Jennifer Lawrence for its September issue. Indicative of his influence, his work is included in numerous public and private museums, including the Museum of Modern Art, New York; the Tate Modern, London; Hirshhorn Museum and Sculpture Garden, Washington, DC; and the Art Institute of Chicago.

Museums with Works by John Currin