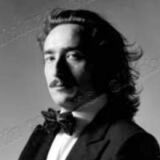 The charismatic figure of Gino De Domincis has been a controversial protagonist of Post War Italian art. His work cannot be framed in a specific artistic current: neither in Arte Povera, nor in the Transavanguardia, nor in the conceptual art, which rejected.

He surrounded himself with an aura of mystery and unavailability. His reputation developed as much out of an absence as from a presence: he avoided the press and refused to have any of his works reproduced photographically.

His first show was at Rome's Galleria L'Attico in 1969 Using the most diverse forms of expression, Gino De Dominicis has approached fundamental themes such as death, immortality, the end of history, the role of art and that of the artist.