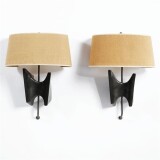 Georges Jouve is one of the most important ceramists of the 1950s. Born in 1910, into a family of decorators, he was soon encouraged to study architecture. At the age of seventeen, he started training both in art history and sculpture at the prestigious École Boulle.

During those years he acquired his nickname of Apollon. Completing his skills with painting courses at the Académie Julian, he then began a career as a theater decorator. He was imprisoned during WWII and escaped in 1943 to take refuge in Dieulefit. In this small Provençal village of potters, Jouve discovered the art of ceramics.

After the war, he returns to Paris and his creations became decorative and personal. He explored shapes, colors and imagined monumental ceramics as well as smaller objects such as vases, ashtrays or mirrors. From 1948, he paid tribute to feminine grace with anthropomorphic pieces and later collaborated with designers Jacques Adnet and Mathieu Matégot. Famous, he regularly exhibited in various fairs like the Salon des Arts Ménagers, as well as at exhibitions in Rio de Janeiro, Barcelona or Rome. He moved with his wife to Le Pigonnet in Aix-en-Provence in 1954.

His work evolved towards pure forms with monochrome enamels. His creations are displayed in the Steph Simon and La Demeure galleries in Paris. The latter organised a retrospective one year after his death in March 1964.