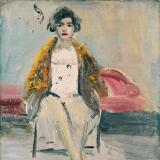 Émilie Charmy was a central figure in the Parisian avant-garde of the early 20th century, re-envisioning the traditional genres of portraiture, landscape and still life with daringly expressive brushwork and vibrant color.

Émilie Espérance Barret was born on 2 April 1878 into a bourgeoisie family in Saint-Etienne, France. She was educated at a private Catholic school and qualified to become a teacher; but instead, she pursued training in art in the studio of Jacques Martin in Lyon. During this period, she adopted the pseudonym Charmy and painted mostly domestic scenes in the manner of the Post-Impressionists. In 1902 she left Lyon for Paris, where her style rapidly evolved into what the novelist Roland Dorgelès described as “her own separate kingdom where the flights of her sensibility rule alone.” She found kindred spirits among the Fauves, with whom she exhibited at the watershed Salon d'Automne in 1905. Her contributions to that show also caught the attention of the legendary art dealer Berthe Weill. In 1913, Charmy was one of the few women invited to participate in the Armory Show, exhibiting four paintings alongside fellow Fauvist pioneers Henri Matisse and Georges Rouault. In the years following the First World War, Charmy held several major solo exhibitions, occasionally ruffling conservative sensibilities with her female nudes – which were considered improper when not painted by male artists – but courting enough favor among top brass to be decorated with the Legion of Honor in 1926. Charmy largely fell out of the public eye after the Second World War, although she continued painting into the 1970s. Charmy died in Paris on 7 June 7 1974 at the age of 96.

The first U.S. retrospective of Charmy's work was held at the Fralin Museum of Art in Charlottesville, Virginia in 2013. Charmy's work is also represented in the permanent collections of such major institutions as the Musée de Grenoble, Musée des Beaux-Arts de Lyon and the Art Institute of Chicago.