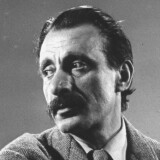 Born 1904. Died 1948.
Interested in selling a work by Arshile Gorky ?
Request an Estimate

Works by Arshile Gorky at Sotheby's

Known for his profound impact on the Abstract Expressionist movement, the Armenian-American painter Arshile Gorky has been hailed as the last Surrealist and a crucial link between pre-war European modernism and the New York School. While he avidly studied the early 20th-century masters, Gorky evolved his own distinctive style, synthesizing surrealism and Expressionism with his own lyrical approach to color and form. Reflecting a life marked by extreme trauma, tragedy and artistic innovation, Gorky’s oeuvre is notable for its tempestuous, explosive energy and its seminal influence on post-war American art.

Born Vosdanik Manoog Adoyan c. 1902-1904 in Ottoman Turkey, Gorky survived the height of the Armenian genocide. In 1908, his father fled to the United States; his mother died of starvation in 1919, a lasting trauma that he affectingly memorialized in The Artist and His Mother (circa 1926–1936). In 1920, Gorky joined his father in the United States, where he would change his name to Arshile Gorky, in honor of the Russian writer Maksim Gorky.

As a young artist, Gorky emulated the modern European masters, especially Cézanne, Picasso and Miró. In the 1930s, he befriended other émigré artists including Willem de Kooning and his prominence in the New York art scene rose. From 1935 to 1941, Gorky worked under the Works Progress Administration, where he met fellow painters Jackson Pollock and Mark Rothko, and designed a series of murals at Newark International Airport in New Jersey. In the 1940s, Gorky’s style evolved toward Surrealist ideas and forms, with André Bréton hailing Gorky’s 1944 painting The Liver is the Cock’s Comb as “one of the most important paintings made in America.” The last years of Gorky’s life were marked by misfortune. In 1946, he was diagnosed with cancer, and shortly thereafter, his wife left him for his friend and fellow painter Roberto Matta. In 1948, Gorky suffered a broken neck in a car accident, leaving his painting arm temporarily paralyzed. He took his own life in 1948.

Today, Gorky’s paintings are held in the permanent collections of the Museum of Modern Art, New York; Whitney Museum of American Art, New York; the National Gallery of Art, Washington, DC; the Art Institute of Chicago; and the Tate Gallery, London. In 2009-10, a major traveling retrospective of his work was exhibited at the Philadelphia Museum of Art, the Tate Modern in London and the Museum of Contemporary Art in Los Angeles.

Museums with Works by Arshile Gorky