LONDON – Its appearance in London’s Kensington Gardens was fleeting in summer 2007, but Iraqi-born British architect Zaha Hadid’s Lilas installation made an indelible impression. Fashioned from white tensile fabric to evoke floral shapes, its three forms rose from the ground, blossoming to a height of more than five metres. As Hadid’s second contribution to the Serpentine Gallery’s pavilion series, a temporary architectural showcase inaugurated in 2000, the poetic-futuristic Lilas crystallised her imaginative fusion of technology and organic form,  her gift for melding the height of human progress with  the complexity and beauty of the natural world. In keeping with the series, the installation existed somewhere between architecture and sculpture and between usefulness and pure aesthetics.

This autumn, Lilas is rising again in another historic British garden – perhaps an even grander one: it is one of the highlights in this year’s Beyond Limits, a Sotheby’s selling exhibition of monumental outdoor sculpture at Chatsworth House in Derbyshire, which is on view through 30 October. Hadid’s work has been featured before in Beyond Limits: her Belu Bench, an object of characteristically fluid line, was on view there in 2007, selling out its entire edition of twelve. This time around, with Lilas, poignancy accompanies the undeniable power of her vision. Planned well before Hadid’s untimely death at age 65 last March, its presence at Chatsworth comes as a tribute to the architect’s remarkable mastery of pure dynamic form.

LILAS INSTALLED IN LONDON’S KENSINGTON GARDENS, 2007, IS ON VIEW AT CHATSWORTH THROUGH 30 OCTOBER. COURTESY THE SERPENTINE GALLERY, LONDON.

For Simon Stock, senior international specialist in Impressionist and Modern art at Sotheby’s and curator of Beyond Limits, “Lilas is particularly beautiful because the structure itself is sculptural. One of the crucial things about sculptural practice, and perhaps architecture, is that a single form can get lost in space,” he explains. “But if you create a sculpture that has several forms, the human eye looks at them in relationship, or in a dialogue, with one other.” Such is the case with Lilas, which Stock relates both to the multi-piece figures made by Henry Moore and to the Mannerist tradition of creating sculptures to be admired from all angles.

It was the Serpentine’s earliest collaboration with Hadid, in 2000, that proved to be the genesis of the gallery’s annual summer pavilion series, for which an architect who has not previously built in the UK is invited to create a project on the Serpentine grounds in Hyde Park. Hadid’s “temporary sculptural structure” was especially designed as a space for the Serpentine’s 30th anniversary gala dinner on 20 June 2000. It set the tone for the new millennium. “There were going to be no flowers, no decoration of any kind. It was going to be resolutely about architecture,” says Julia Peyton-Jones, who until this summer served as the director of the Serpentine for more than 25 years. “That was representing what the Serpentine stood for. And it was a brilliant thing to work on.” Initially intended to stand for one night only, Hadid’s tentlike structure was allowed to stay up for longer, and the idea for a series of pavilions began.

The project stemmed from Peyton-Jones’s profound belief that, as she puts it, “it is only possible to understand the work of an architect by standing in the space. You can’t understand it if you look at an exhibition of the work, no matter how good [the exhibition is].” The list of architects the Serpentine has commissioned for its pavilions is remarkable: Frank Gehry, Rem Koolhaas, Jean Nouvel, Herzog & de Meuron and Ai Weiwei – and Hadid, the first woman to receive the Pritzker Architecture Prize, in 2004. Says Peyton-Jones: “On balance, if you look at the programme, there would be a consensus that a number of architects that we have commissioned really are the most notable of our time.”

But back to 2007, the year when the Danish-Icelandic artist Olafur Eliasson and Kjetil Thorsen, of the Norwegian architectural practice Snøhetta, received the Serpentine commission. The duo’s ambitious pavilion, which resembled a giant spinning top, was meant to be the centrepiece of the Serpentine’s Summer Party gala in June. But the soaring cost of materials delayed fabrication, pushing its completion to August. Hadid, a Serpentine trustee, stepped in.

“We didn’t have a structure for the event,” says Peyton-Jones, “so Zaha very generously designed Lilas.” Although it remained in place for just two weeks, Hadid’s pavilion “followed from the idea that you do the very best you can at the optimum level, and it doesn’t matter if it is for one hour, one night, one day, one year or a hundred years,” says Peyton-Jones. “Because the people who see it can have their life changed as a result.”

The commissions were a risk for the gallery. Although hardly the most portable of artworks, these pavilions needed to pay for themselves – and they did. “Every single pavilion has been sold, because we had to,” Peyton-Jones explains. In 2007, Lilas was bought by a London-based collector who owns four other pavilions. Acquiring them “became a bit of an addiction,” says the collector, who wishes to remain anonymous. He began with Oscar Niemeyer’s contribution in 2003 and committed to Eliasson and Thorsen’s pavilion before its fabrication – well before Hadid’s Lilas was built. “To me, the pavilions seemed unbelievable, because I love architecture as well as art,” the collector explains. “If you amalgamate those [disciplines], you’ve got the Serpentine pavilions. At the time, Julia was very innovative, and architects hadn’t necessarily been seen in that light. Now there are so many countries doing pavilions as a way of showing art architecture.”

HADID’S BELU BENCH ON VIEW AT CHATSWORTH IN 2007, WHEN THE ENTIRE EDITION SOLD OUT.
COURTESY THE SERPENTINE GALLERY, LONDON.

When Hadid announced that she was departing the Serpentine’s board of trustees after 25 years, she praised Peyton-Jones for her “unrelenting enthusiasm to experiment with new ideas.” For her part, Peyton-Jones says “that freedom of looking at things from another perspective has been enormously helpful in how we’ve thought about the pavilion and how it can be best adapted, used and developed from every conceivable point of view. And that has been hugely exciting.”

That spirit of openness, which has undoubtedly underpinned the success of the Serpentine’s series, is also a hallmark of Sotheby’s annual Beyond Limits exhibition. If Hadid’s Lilas’s star burned brightly yet relatively briefly in the pavilion firmament, it is now dazzling visitors once again at Chatsworth.

Ben Luke is art critic at the London Evening Standard and features editor of The Art Newspaper.

Beyond Limits, a selling exhibition of monumental outdoor sculpture, is on view 10 September to 30 October at Chatsworth House, in Derbyshire, England.
Enquiries +44 (0)20 7293 6342.

Chatsworth’s Art Out Loud festival (23–25 September) will feature  Patrik Schumacher in conversation with Farah Nayeri, placing Lilas within Zaha Hadid’s wider œuvre. Julia Peyton-Jones will also be on the agenda. 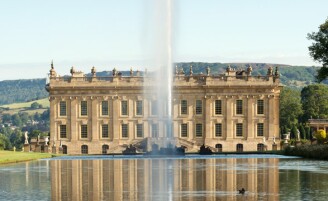