Vienna: A Conversation with Hans-Peter Wipplinger

Sotheby's Museum Network (SMN): Thank you for taking the time to discuss Vienna with us. Are you from the city originally? What are some of your impressions of the city?

Hans-Peter Wipplinger (HPW): Since 2015, I have been the director of the Leopold Museum in Vienna, famous for its Egon Schiele collection, which is the biggest in the world, and the unique "Vienna 1900" collection. Coming from upper Austria, I studied art history, theatre studies, journalism and communication sciences at the University of Vienna. After graduating I lived several years abroad, which included working at the New Museum in New York. Between 2003 and 2007, I was the director of the Museum of Modern Art in Passau, Germany.

I then managed the exhibition hall Kunsthalle Krems in Lower Austria for seven years. In this exciting art space, adjacent to the Danube river, I organized numerous international exhibitions, working with artists like Yoko Ono, Pipilotti Rist, Gelatine and Sarah Lucas. I additionally exhibited shows featuring Joseph Beuys, Francis Picabia or Paula Modersohn-Becker. I have been living in Vienna for 10 years, enjoying its cultural diversity, cultural offerings, theatre programs, dance performances, etc. The rich heritage dating from "Vienna 1900“ becomes alive with every step you take in the city. The large international population, including those who reside in the city and tourists, makes Vienna a vibrant, open-minded and cosmopolitan city.

SMN: What are your top three museums in Vienna?

HPW: First of all, I’d like to mention the Kunsthistorisches Museum. It’s the museum of fine arts in Vienna, and it houses the imperial collections, including the famous painting galleries of Italian, Flemish and Spanish art (Breughel, Titian, Tintoretto, Velázquez, Rubens and many more), the imperial treasures in the "Schatzkammer“ and the "Kunstkammer,“ and the amazing Egyptian collection.

Additionally, you’ll find a unique exhibition program at the Albertina, which has one of the most important graphic collections in the world. I’m always building bridges and making connections between Modernism and Contemporary Art at the Leopold, similar to the feats of the Albertina. Last but not least, I’d like to point out the Wien Museum, a museum that has very intelligent exhibitions that focus on quotidian Viennese life and Vienna's cultural history, featuring objects from its multifaceted collection.

SMN: What are a few of your favorite artworks permanently exhibited in Vienna?

HPW: My all-time favourite is in the Leopold Museum; Egon Schiele’s Sitting Male Nude , the so-called "Yellow Nude“, which is an outstanding work of Austrian Expressionism. Painted in 1910, it is really avant la lettre with its existential approach. Schiele is the central protagonist of Viennese Expressionism, depicting his emotions in a very radical way. Richard Gerstl’s portrait of composer Arnold Schönberg’s family from 1908 at the MUMOK (Museum für moderne Kunst) is a great example of the artist’s artistic style. The Leopold Museum owns the biggest collection of artworks by this powerful proto-Expressionist, including two of his famous Self-Portraits. An early one can be seen on an easel inside the Wien Museum: Self-Portrait with Palette, a Gerstl-masterpiece.

At the Belvedere you shouldn’t miss the Character Heads by Franz Xaver Messerschmidt. Around 1770 the sculptor created around 70 studies of the human physiognomy, which are displays of extreme emotions and expressions. The 16 heads from the Austrian Gallery’s collection show Messerschmidt as a precursor of Expressionism, serving as inspiration for the artists of the Viennese Actionism movement and Arnulf Rainer.

SMN: What are some of your favorite places around the Leopold Museum?

HPW: The MuseumsQuartier (MQ) is a hotspot of Vienna. The lively bustle of the big courtyard in front of the Leopold Museum is complete with cafés, restaurants, outdoor furniture, and is comparable to an Italian Piazza. Here you come across young people from Vienna, tourists or business people, working, chilling or scrolling on their smartphones. If you’re searching for great art books you should absolutely visit the Walther König bookstore at the entrance of the MQ. The Palm House Schönbrunn, an Art Nouveau glass house designed by Friedrich Ohmann (1902-1906), located in the garden of the imperial palace, is very inviting to sit in, especially in the evenings when the interior is brightly lit.

SMN: Where are your favorite ‘hidden gem’ or lesser-known cultural destinations in Vienna that a first-time visitor might not be aware of?

HPW: The Theatermuseum (Museum of Theatre) in the Baroque Palais Lobkowitz, close to the opera and the Albertina is a very interesting place. The Volkskundemuseum in the Garden-Palais Schönborn is a great museum dedicated to Folk Life and Folk Art, the objects showcase pre-industrial life in the former Hapsburg monarchy.

SMN: What are a few of your favorite restaurants? How about cafés?

HPW: A real Fin de Siécle café is the Café Sperl. The Café Leopold is a great place to taste Asian Fusion dishes. In the summer it’s amazing to sit near the fountain in front of the Leopold Museum or to have a drink at the Tiki Bar of the Café Leopold. The Corbaci restaurant at the MQ, designed by french architects Anne Lacaton and Jean Philippe Vassal with its turkish-arabic style tiles, serves Austrian cuisine influenced by eastern ideas. The Kleines Café at the Franziskaner Platz in the city centre is a modern homage to the classical Viennese Café and was designed by architect Hermann Czech in the 1970s .

SMN: Where would you stay if visiting Vienna briefly?

HPW: Around the MQ I’d suggest the ViennArt Hotel in Breite Gasse, the 25 hours Hotel, the Sans Souci, or the K + K Hotel Maria Theresia in Kirchberggasse.

SMN: What would be a perfect day in Vienna for you?

HPW: Let’s have a walk through the Stadtpark, Vienna’s central City Garden, along the river Wien. The Jugendstil-design (gates, bridges, monuments) is fantastic and was designed mostly by Friedrich Ohmann, an Otto Wagner contemporary and Josef Hackhofer, who worked in Wagner’s studio. Then you could stop at the Naschmarkt, a market with many restaurants, where you can taste foods from around the world. Don’t miss Joseph Maria Olbrich‘s Secession bulding with its amazing Beethovenfrieze by Gustav Klimt.

SMN: Do you have any favorite public events or annual festivals in Vienna?

LPW: Karl Regenburger‘s ImPulsTanz Festival is full of surprises and dedicated to International Dance. Professional dancers and amateurs meet in workshops all around the city to be creative and have fun. The Viennese Film-Festival Viennale, now organized by director Eva Sangiorgi, provides a perfect overview of domestic and international movie productions.

SMN: When is the best time of year to visit?

LPW: Each season in Vienna has its beautiful moments. In the spring time there are the blossoming chestnut trees which release the perfume of white lilacs. In the summer it’s relaxing to stay along the Alte Donau, an old section of the danube river. In the autumn a walk through the multicoloured Vienna woods (Wienerwald) will give you a moment of harmony with nature. And in winter time, when the snow falls and the roofs are covered with white, it’s nice to enjoy a cup of tea and to eat a piece of Sacher’s chocolate cake.

SMN: Thank you again for sharing your insights. One final question: what is the best way to get around?

LPW: Take a city bike or have a nice walk. There’s so much to see everywhere!

Hans-Peter Wipplinger, born in Schärding in 1968, studied art history, theater studies, journalism and communication science at the University of Vienna. He has worked at the OK Centrum für Gegenwartskunst in Linz, the New Museum of Contemporary Art in New York, the Vienna International Film Festival etc. He was director of the Museum Moderner Kunst in Passau from 2003 to 2007 and director of the Kunsthalle Krems from 2009 to 2015. He has directed the Leopold Museum in Vienna since October 2015. He has curated numerous thematic exhibitions and monographic retrospectives on classical modernism and contemporary art and has written and edited various academic essays on these topics. 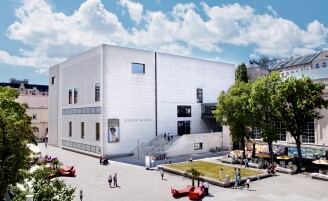