W ith its status as the oldest watch manufacture to successfully maintain continuous production and its ranking in the pantheon of haute horology alongside the like of Patek Philippe and Audemars Piguet, Vacheron Constantin is truly one of watchmaking’s historic greats.

From its ground-breaking work with high complications, to the atypical bold wristwatch case/lug designs it produced in the middle part of the 20th Century, and a roster of renowned wearers that includes Napoléon Bonaparte, Marlon Brando and Jay Z, Vacheron Constantin really is about as good as it gets.

And for the Vacheron Constantin: The Vintage Collection online sale, Sotheby’s has teamed up with VC’s burgeoning in-house Heritage Department to curate a collection of wristwatches that plot the intriguing six decade period from the 1940s to the 2000s, one of the most dynamic and significant eras for both Vacheron and watchmaking in general. Here are my personal picks of the bunch:

Organised chronologically, Lot 1 dates from 1942 and is the sale’s earliest piece: a handsome 35mm pink-gold ref. 4702 chronograph with tonal salmon dial. Production of the 4702 began in the late 1930s, the decade that marked the completion of the watch’s seismic move from pocket to wrist, making this classically proportioned chronograph a nice snippet from the early years of wristwatch production in earnest. There’s also something about the warm lustre that pink gold alloys from this period tend to develop over the years that I find enchanting.

Lot 1 is a watch that’s still very wearable to this day, more so than before given the subjective (albeit sluggish) move back to more sensible case sizes, and I’d be sorely tempted to ask Cleverley to knock up a Russian reindeer leather ‘Bund’-esque strap for it and then pair it with a RRL denim shirt.

Lot 2, a ref. 4240 ‘complete calendar’ from 1945, is a particularly interesting piece as last year saw Vacheron launch a lovingly tweaked re-issue of the 4240 in the shape of the Historiques Triple Calendrier 1942 (production on the 4240 began in 1942, hence the re-issue’s moniker). With only a low number of 4240s known to have been made, Lot 2 represents a rare opportunity to acquire the OG.

This particular ref. 4240 is made all the more desirable by virtue of it being one of the very few to have been cased in stainless steel. Due to shortages brought about by increased production throughout industry during the Second World War, steel was in exceptionally high demand and its use heavily rationed. Note also the 4240’s fetching ‘tear drop’ lugs.

Both cased in yellow gold, Lot 4 and Lot 5 are prime examples of VC’s work with case shape. Dated to 1949, Lot 4 features an unorthodox rectangular case ‘pinched’ midway up into a symmetrical curve complimented by a gentle pyramid-shape crystal over the dial. With a delightful play of light across its faceted surfaces, Lot 4’s watch perfectly illustrates modernism’s influence on watch design.

Produced in 1960, Lot 5 can boast of a self-winding movement and three-from-the-centre hand configuration. Its unusual ‘layered’ case and integrated lug design has earned it the nickname ‘Cioccolatone’ due to “its resemblance to a square of chocolate” – as the lot details note. Another attractive piece of watch design, it’ll still slide nicely under a Charvet shirt cuff despite its large 43x35mm dimensions. 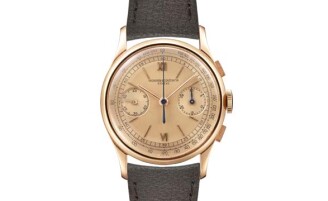