Three of a Kind: Drawings

By Sotheby's
Besides the collector's eye and the drawings' pure quality, there is one common thread running through all the works in Sotheby's exceptional upcoming auction, Traits et Portraits , and that's expression. Ahead of the sale, we take a look at three portraits from the collection, at a variety of price points.

Beautifully executed, solely in the red chalk that Ribera exploited so effectively throughout his career as a draughtsman, this sheet is delicately and precisely drawn, leaving the natural colour of the paper to enhance the strong chiaroscuro effects that animate the features of the face. This witty and intense image could indeed very well be executed from life. This aspect distinguishes the present work from other representations of grotesque and satirical heads, where the accentuated peculiarities of the figures' features play a much more significant role. Here, the old lady's head is turned slightly to one side, but the viewer can still clearly see her fixed and determined stare.

Ribera was clearly fascinated by grotesque physiognomies, in a way that links him to the Leonardesque tradition of grotesque heads, as well as to the eternal human fascination with anomalies and oddities. The present sheet, somehow a more realistic image than most of the artist’s other drawings and etchings of similar subjects, seems to add a more intimate and emotional dimension to Ribera’s powerful sense of satire and the grotesque.

In July 1936, Picasso was reunited with Dora Maar in Mougins. The daughter of a Croatian architect, Maar attended classes at the Union Centrale des Arts Décoratifs and the École de Photographie in Paris during the 1930s. She met Picasso at the beginning of the year, by way of an introduction from Paul Éluard. Their love affair lasted nine years.

Portrait de femme shows Dora Maar in a three-quarter pose with shoulder-length hair. The black pencil line is lively. The white sheet is bathed in light. Executed in 1936, this drawing (which can be linked to a canvas dating from 7 November 1936, characterized by pastel tones) is a far cry from the tormented, "Kafkaesque" drawings that echoed through the many portraits of "The Weeping Woman". It should be said that in the summer of 1936, despite the looming Spanish Civil War, it was an idyllic period. In July and August, the couple split their time between the house in Mougins that belonged to Man Ray’s parents, and Saint-Tropez.

During 1936, the year when Portrait de femme was made, Dora Maar had a growing influence on the work of the artist who was about to paint Guernica. Before becoming a painter, she was a photographer, and from 1936 to 1937, combining his genius with her expertise, they collaborated on a series of rayographs. Picasso’s line drawings are also reminiscent of the silhouette technique, one of the historical origins of photography. Portrait de femme is a radical stripping away of colour; the scene is flooded with the intense light of the Mediterranean. A few months later, at the beginning of 1937, in the Rue des Grands-Augustins studio, Dora Maar is the only person allowed to enter the room where the last great historical painting in the history of art took shape in black and white. Nine portraits of Picasso at work would result from her intense, often nocturnal, photographic sessions documenting its progress. Portrait de femme is a beautiful and tender flash of brilliance in the midst of a highly charged political, professional and passionate moment.

In collaboration with the editors, Louis Aragon, Fernand Mourlot and Tériade, Henri Matisse embarked on several projects of illustrating literary works, one of which was Les Fleurs du Mal (1944-47) by Charles Baudelaire. Inspired by a photograph from the 19th century, this charcoal portrait of Charles Baudelaire was drawn in Venice in 1944 when Matisse was starting work on the illustrations for Les Fleurs du Mal.

Throughout the 1930s and 1940s, drawing held a central place in Matisse’s art and notably saw him develop the stump technique. He used smudging and erasing to create texture and to accentuate the rugged aspect of the charcoal, giving his portraits a strong presence. This technique liberated Matisse from the rigours of an exact representation, creating a looser style, which becomes the expression of a feeling. In his article Notes from a painter on his drawing published in 1939, Matisse described the advantages of this medium that allowed him to “consider the character of the model at the same time as the human expression, the quality of the ambient light, the atmosphere and everything that can be expressed by the drawing” (cited in John Elderfield, The Drawings of Henri Matisse, London, 1984, p.84). Matisse was absorbed by his work on paper. Breaking away from the conventions of the subject, the format and the commissioners, drawing becomes a space of pure freedom.

As for the reflection on the figure, Matisse identified with the figure of the poet on an extremely modern - if not contemporary – principle; the identification of the artist in his art. A sensual example of the maturity of Matisse’s style, created with a combination of simple, delicate lines and masterful nuances of shade and trembling light, this portrait of Baudelaire is a manifesto of modernity. 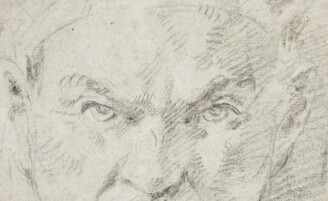