Three of a Kind: Andreas Gursky

Andreas Gursky's photographic examination of the world has resulted in some of the most iconic images in recent history, and his name is synonymous with large-scale photographs of monumental structures and views. His subjects include the Olympic stadium in Beijing, the Chicago Stock Exchange and the interior of an 88 storey tower in Shanghai.

"I am never interested in the individual, but in the human species and its environment." — Andreas Gursky

Gursky's current exhibition at the newly re-opened Hayward Gallery on London's South Bank spans the highlights of a career spent documenting the human interaction — and fascination — with architectural spaces. Several of his works are included in the upcoming Contemporary Curated sale in London on 11 April. Here, we look at three distinctive Gursky works, at three very different price points.

Gursky often turn his lens on outdoor spaces, but even as landscapes they retain a human element. Gursky often chooses unremarkable spaces as his subject matter; the underneath of a bridge, scrubland, footpaths, cafeterias and motorways. Undertaken by Gursky, these locations take on new gravitas.

Regimented grids and repeated patterns are a hallmark of Gursky images. He finds the finds the beautiful the inner workings of vast spaces; hotels, stadiums and factories have all been documented by the artist, who is fascinated by the geometric lines that make up a building's structure.

In photographing his subjects as a block of pattern and texture in the composition rather than close-up portraits of individuals, Gursky reveals something about human behaviour at a particular point in history. Love Parade operates at the intersection of fine art and documentary photography, combing two of Gursky's recurring devices — meticulous detail and epic scale.

Read about the current Andreas Gursky exhibition at the Hayward Gallery. 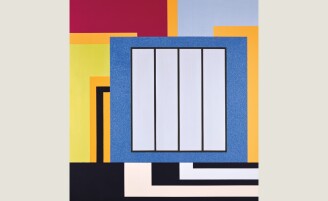