T homas Hart Benton rose to prominence in the 1930s as a painter of daily life in rural America. Born in Neosho, Missouri in 1889, Benton developed a strong sense of nationalism at an early age due in part to the politicized environment in which he grew up. His great-uncle was Missouri’s first senator and his father was a congressional representative who often invited other public figures into the family’s home. Such exposure gave Benton an interest in the American scene that developed into a lifelong theme in his artistic career. His extensive travels throughout the country coupled with his family’s prominence made Benton as much a historian an artist, and as much a nationalist a regionalist.

The term “Regionalist School” was first used to describe the work of Benton, Grant Wood and John Steuart Curry during a joint exhibition held in 1934, and works like Across the Curve of the Road exemplify Benton’s distinctive version of this uniquely American style. Throughout his career, Benton was sympathetic in his portrayal of farmers and field workers, basing his work on scenes he witnessed firsthand. In the summer of 1938, Benton spent a few months on the road immersing himself in the culture of rural America. With his friend and colleague James Fitzgerald, who, like Benton, taught at the Kansas City Art Institute, the artist set off on a sketching tour of Louisiana, Oklahoma, Missouri, Arkansas, Tennessee and North Carolina. In the fields, farms and small towns of the rural south, Benton made hundreds of sketches depicting the struggle for existence that was the brutal day-to-day life for so many Americans at this time. These sketches provided a rich source of material and served as the basis for several finished works.

Each of the six works by Benton included in the May 23rd American Art sale succeed as an expression of his stated artistic ideal:  “I believe I have wanted, more than anything else, to make pictures, the imagery of which would carry unmistakably American meanings for Americans and for as many of them as possible” (as quoted in Matthew Baigell, Thomas Hart Benton, 1973, New York, p. 87). 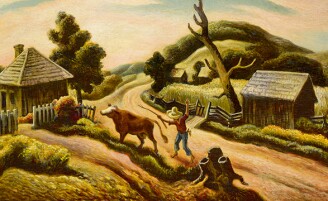