J ames Bond has always set the sartorial standard on the silver screen. A standard that in Spectre, released in 2015, was firmly upheld. it stands to reason that the production used some of the most renowned brands and figures in the industry to ensure that every detail was perfectly attended to. This attention to detail extends past simply the clothes but also the accessories such as cufflinks, dress sets, ties and of course, watches.


While the main focus is often on Bond’s look, it is easy not to notice the styling of other characters. In every case, the way the characters are dressed reflects their role, their story, their personalities, and this is very much the case of Mallory played by Ralph Fiennes. In the most recent franchises we see the departure of Judy Dench’s ‘M’, succeeded by an immaculate and very traditionally styled Fiennes. His character is reminiscent of the films of old, where M was always played by a male actor, and Fiennes’ attire certainly echoes this too. A higher waisted trouser, box cloth braces, a good watch and bespoke double-breasted suits portray the picture-perfect gentleman who, like Bond, is more than able to handle himself.

The question beckons, while 007 favours the Omega Seamaster 300, what is on the wrist of the man who has Bond in his hands? The answer: a pink gold Longines Conquest Heritage. True to his image the watch of the new ‘M’ is incredibly elegant, and serves a very pleasing vintage dose of 1960s styling, as with the original Conquest models. Just like M the watch is a modern take on a classic, featuring the automatic calibre L633 and the date aperture moved from the usual 3 o’clock position to 12.

The watch, presented in our Watches Online sale was one of only two worn by Fiennes during production, and, at an estimate of £6,000–8,000 represents a fantastic opportunity to own a fantastic piece of film memorabilia. It is certainly a watch to be worn, and worn in the knowledge that it donned the wrist of one of the best dressed men in the James Bond franchise. 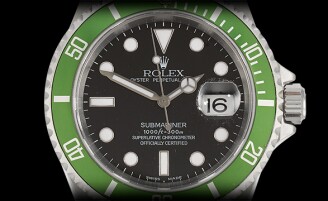