The Science of Light and Colour: Achille Laugé's Neo-Impressionist Works

N eo-Impressionist painters used a technique that was based on the systematic division of tones. In doing so, they continued the research into light and coloured vibrations started by the Impressionist group, but also began to look to new and more methodical techniques. They were fascinated by modern scientific research into colour, especially Rood’s theory of light or Chevreul’s idea of simultaneous contrast.

Seurat developed the divisionist technique from around 1884-85 and the method was theorised by Signac in his 1899 work D’Eugène Delacroix au Néo-Impressionnisme: “Like the Impressionists, Neo-Impressionists only use pure colours on their palette. But they absolutely loathe any mixing on the palette whatsoever, except of course, between the colours that are adjacent on the colour wheel. These colours, which are connected through gradients of shade and become lighter with white, will tend to restore the variety and all the tones of the shades in the solar spectrum.

An orange mixing with a yellow or a red, a violet moving into a red or blue, a green passing from blue to yellow, along with white, are the only elements they have at their disposal. But by mixing these pure colours optically, by varying their proportions, they achieve an infinite quantity of shades, from the very intense to the most grey.” The unquestionable masterpiece of this movement was the striking painting by Seurat, A Sunday Afternoon on the Island of La Grande Jatte.

In addition to Seurat and Signac, the main representatives of this technique were largely French and Belgian artists such as Angrand, Pissarro, Dubois-Pillet, Cross, Luce, Petitjean, Lemmen, Laugé and Rysselberghe. By giving primacy to pure colour, the divisionism of the neo-impressionists consequently paved the way for Fauvism.

Of all the Neo-Impressionists, Achille Laugé gives us a unique, radiant and balanced body of work. In Vase of Roses and Peonies, the strokes are fragmented, yet delicate and vibrant. With hints of Japonisme, the painter creates harmony between the full and empty spaces, the large blossoming petals and slender stems; all in a simple, pared-back space.

Originally from Aude, the artist studied at the Beaux-Arts de Toulouse from 1876 where he famously met Antoine Bourdelle and Henri Martin. After a stay in Paris he returned to live in Aude from 1888. After the death of his father he moved to Cailhau into a modest house named Alouette, which would become a recurring subject in his paintings.

“Laugé would have been content to be one of the regional masters of art, painting picturesque canvasses that were endearing because they reflected their native land. But he did not miss the great movement which, in the wake of Impressionism, disrupted painting from the 1880s onwards. The use of a restricted number of pure colours and the fragmented dabs which appear in most of his work, evoke a community of painting research with Neo-Impressionism. His move toward a new style of painting that was linked to his own poetry, make him better than Félibre who sings of his native Languedoc, and gives him the status of a national artist.” (Nicole Tanburini, Achille Laugé - Le point, la ligne, la lumière, 2009) 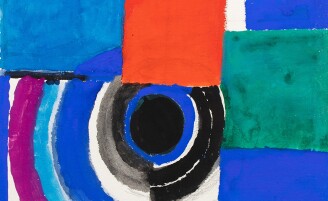