The Sassoons in England

T he United Kingdom proved to be an attractive new home for many of the upwardly-mobile children and descendants of David Sassoon. The first son to visit England was Arthur (Abraham Shalom; 1840-1912), who came in 1855 to study under Dr. Hermann Adler, future Chief Rabbi of the British Empire. While he later returned to his native India and traveled to China, he and his wife Eugenie Louise Judith (1854-1943) eventually moved to the British seaside town of Hove, leading a life of luxury and associating regularly with royals like Albert Edward, Prince of Wales (later: King Edward VII), and his son George Frederick Ernest Albert, Duke of York (later: King George V).

Arthur’s older brother, Sassoon (1832-1867; named for his grandfather who had passed away two years prior), was born in Bombay, educated in Baghdad, and initiated into his father’s company in Shanghai but, in 1858, became the first Sassoon to settle permanently in England. He opened a bank on Leadenhall Street in London and helped found branches of the family business in London, Liverpool, and Manchester. Sassoon David Sassoon collected Hebrew books and manuscripts, as well as art, and served in various communal functions, including as gabbai (treasurer) of London’s Bevis Marks Synagogue, head Hebrew examiner at the Jews’ Free School, and council member of Jews’ College. Together with his wife Flora, a descendant of the illustrious Rabbi Sason Shindookh of Baghdad (1747-1830), he had four children: Joseph, Rachel, Alfred Ezra, and Frederick Meyer. Rachel (1858-1927) went on to lead a distinguished career as the editor-in-chief, simultaneously, of The Observer and its rival, The Sunday Times, while Alfred’s son Siegfried Loraine (1886-1967) became a famous pacifist and Great War poet.

David’s eldest son, Albert (Abdullah-Meir; 1818-1896), spent the majority of his career in the East, but he, too, eventually moved to the West. His first assignment on behalf of the family business was to return to his native city of Baghdad, from which he relocated to Shanghai before finally removing to Bombay in 1862 to assist his aging father. After assuming leadership of the firm, he took advantage of the opening of the Suez Canal in 1869 to found new company branches in the Middle East. He also significantly increased profitability by establishing in 1874 a new subsidiary, the Sassoon Spinning and Weaving Co., Ltd., which allowed the firm to manufacture textiles at local Bombay cotton mills and also contributed toward the industrialization of India. Another major achievement of Albert’s was his construction in 1875 of the Sassoon Docks, the first wet docks on the west coast of India, which facilitated the growth of the cotton industry and helped transform Bombay into a great modern port city.

Like his father, Albert was a generous donor to charitable causes. He financed a new building for the Alliance Israélite Universelle (AIU) Jewish boys’ school in Baghdad (later named for him), contributed toward the construction of the Bombay Victoria and Albert Museum and the reconstruction of the city’s Elphinstone High School, and funded numerous university scholarships. In recognition of his service to India, Albert was made a Companion of the Order of the Star of India (CSI) in 1867, a member of the Bombay Legislative Council in 1868, a Knight Commander of the Order of the Bath (KCB) in 1872, and 1st Baronet of Kensington Gore in 1890.

Sir Albert transferred the headquarters of David Sassoon & Co. to Leadenhall Street in 1872, received the Freedom of the City of London in November 1873, and settled there permanently in 1875, leaving the management of the Bombay offices to his younger brother Solomon. In his adoptive country in 1889, he helped found the Imperial Bank of Persia and the same year hosted Naser al-Din Shah Qajar of Persia, from whom he received the Order of the Lion and the Sun (KLS). Like his brothers Arthur and Reuben, he was a confidante of the Prince of Wales, whom he had entertained in his Sans Souci home in Bombay in 1875. In addition to his business duties, Sir Albert served as president of the Jewish community of Manchester and vice president of the Anglo-Jewish Association and (like his brother Reuben) was a member of the AIU in Paris. He passed away at his home in Brighton in 1896 and was buried nearby in the Sassoon Mausoleum.

Sir Albert’s surviving son, Edward (Ezra; 1856-1912), grew up in Bombay but was educated at the University of London. In 1887, his marriage to Aline Caroline de Rothschild (1867-1909) brought two of the mightiest Jewish commerce and banking families into wedlock. Upon his father’s death in 1896, he assumed the baronetcy, inherited the home in Brighton, and took control of David Sassoon & Co. which, in 1901, was incorporated as a joint-stock company. In March 1899, Sir Edward was elected as a Liberal Unionist Party Member of Parliament for Hythe, in which capacity he functioned until his death. A traditional Jew, he served as parnas (warden) of the Bevis Marks Synagogue and vice president of both the Anglo-Jewish Association and Jews’ College.

Sir Edward and his wife had two children, Philip Albert Gustave David (1888-1939) and Sybil Rachel Betty Cecile (1894-1989), both of whom rose to prominence. In 1912, with his father’s passing, Philip succeeded to the baronetcy and was elected to the House of Commons as a Conservative Member of Parliament for Hythe, serving in several government roles throughout his career. A military man who loved horseback riding, he also became a well known art collector (he was appointed Chairman of the Trustees of the National Gallery from 1933-1935) and social host at his upscale homes. Like her brother, Sybil was a famous supporter of the arts and socialite. In 1913, she married George Cholmondeley, Earl of Rocksavage (later: 5th Marquess of Cholmondeley), and during World War II served as Chief Staff Officer to the Director of the Women’s Royal Naval Service (WRNS) before retiring from public life.

Two further sons of David Sassoon who moved to England were Aaron (1841-1907) and Frederick (Faraj- Hayyim; 1853-1917). The former, older twin brother of Solomon (about whom, see p. 90), lived a quiet life out of the limelight in Hove and did not participate actively in the family business. In his will, he left most of his fortune “to be applied for the benefit of the poor in any country, kingdom, or principality in which the firm of David Sassoon & Company, their predecessors, successors or assigns, shall now be carrying on business.” Frederick began his career in Hong Kong in 1873 but eventually moved to England, succeeding his nephew Sir Edward as head of the Sassoon firm in 1912. Upon his death in 1917, management of the company passed first to Frederick’s cousin David Gubbay (1865-1928) and then to Sir Philip Sassoon, although the latter’s involvement was largely nominal. 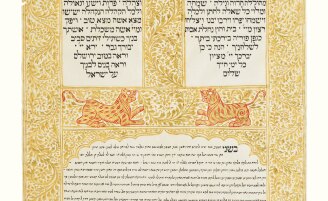