The Origin of the Falling Flowers Poems

By Sotheby's
Shen Zhou’s Poems on Falling Flowers in Running Script (Estimate $1,200,000-1,800,000) is a highlight of the upcoming Fine Classical Chinese Paintings & Calligraphy on 22 March in New York.

S hortly after the Mid-Autumn Festival in 1502, then aged 76, Shen Zhou suffered the loss of his son. Following a period of grieving, the Ming dynasty painter, calligrapher and poet wrote an initial set of ten poems on the theme of falling flowers. These lines inspired a poetic exchange with Zhou’s peers, Wen Zhengming and Xu Zhenqing who each composed more poems in response to the content and rhyming scheme of Shen’s poems. After reading their compositions and delighted, Shen Zhou wrote more poems as responses. 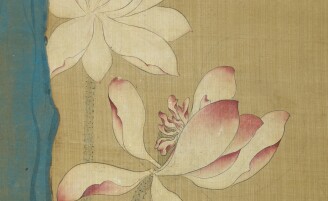 The creation and exchange of these poems on falling flowers, 90 in all, by what is known as the Wu School literati artists, would become a celebrated story in the study of Chinese calligraphy and literature.

Shen Zhou’s Poems on Falling Flowers in Running Script is a calligraphic rendition of the ten original poems on falling flowers as well as three of the poems that he wrote in response to Wen Zhengming and Xu Zhenqing.

This scroll once belonged to the Yuanjin Monastery in Zhujiajiao, in the present-day Qingpu District of Shanghai. This monastery, whose successive abbots were accomplished poets, and painters and associates of literati, was renowned for its collection of paintings and calligraphy. The collection became dispersed during wartime chaos and some of the works were replaced with forgeries. At that time the scroll entered private hands and was later collected by the Modern master Wu Hufan.

As a work of calligraphy, this scroll is one of the finest examples extant of Shen Zhou’s writing in the style of Huang Tingjian. Every stroke confident and crisp, the characters are tilted but linked in a continuous and steady flow of energy. Comparable works by Shen Zhou on the theme of falling flowers are held in the collections of the Shanghai Museum, the Nanjing Museum and the Taipei National Palace Museum.