The Meteoric Rise of Hip Hop

As Sotheby’s prepares the first major international auction ever to focus on Hip Hop, Greg Tate explains how a movement born in America’s most impoverished communities has become a powerhouse of cultural influence.


H ip Hop was destined to cast long shadows over the 21st-century cultural landscape. Like the Black popular artforms which had preceded and inspired it – blues, jazz, rock and roll, soul, funk and disco – Hip Hop fast-tracked itself from the extreme racial and social margins of the nation to the commercial mainstream. As a multi-disciplinary artistic phenomenon, Hip Hop also accomplished something unprecedented in Black cultural history: the visual art of the movement – variously known as “subway graffiti” or, more formally, “writing” within the Hip Hop community – achieved international gallery acclaim and reward before the musical aspect did. Contemporarily celebrated painters of Hip Hop’s insurgency, such as Fab 5 Freddy, Lee Quiñones, Lady Pink, Kool Koor, Rammellzee, Futura 2000 and Blade, transitioned from the city’s trainlines to SoHo, Bronx and Lower East Side galleries to significant recognition. Most have sustained art world careers and patronage in the decades since. 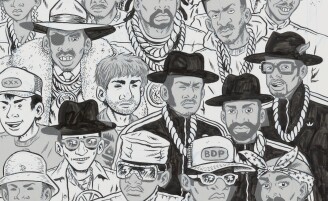 Jean-Michel Basquiat was never a train writer, but he was a friend, fellow nightclub denizen and creative collaborator with many of the aforementioned – and his career’s embrace by the New York gallery elite dovetailed with his generational peers (even if not to the same financial degree, given that he soon became the most successful Black artist in American history and one of his generation’s Olympic performers regardless of ethnicity).

The core artistic ingredients of Hip Hop had been brewing in the south Bronx (and soon after in Brooklyn and Harlem) since the early 1970s – rapping, turntabling and breakdancing and electric boogie choreography – which, along with writing, formed the vaunted four elements of Hip Hop culture. Not long after, the coinage came into street-conversational, music business and journalistic use through Afrika Bambaataa and the Zulu Nation, a Bronx-based community organisation that’s as close to a legacy-banner carrying arts institution as Hip Hop has ever had.

Within the Golden Age, Hip Hop established itself as a dominant influencer on global youth culture in language, music, fashion and visual art – particularly the “street art” movement visible through contemporary Europe and South America.

As rap music became more engaged by the world beyond rap fans, and became more outspoken about sexuality and politics, it generated both push back and clap back from conservative adults, some connected to Congress, the courts and law enforcement.

The rap music made in the 1990s, beyond the Golden Age, proved to be no slouch in sustaining and expanding the popularity, financial reward and artistic profile of the genre – especially through the pop music industry development and videogenic rise of such superstar talents as Nas, Dr Dre, Snoop Dogg, DMX, The Pharcyde, The Notorious BIG, 2Pac Shakur, Lil’ Kim, Jay-Z, Eve, Eminem, OutKast, Goodie Mob, The Roots, Fugees, Black Star featuring Talib Kweli and Mos Def and Lauryn Hill.

The 1990s saw the Hip Hop creative ethos and production aesthetic infiltrating and impacting the music being produced by contemporary R&B vocalists: Mary J Blige, Soul II Soul, Erykah Badu, Bobby Brown, D’Angelo and Jill Scott chief among them. That decade was also when corporate fashion manufacturers, automotive companies, liquor brands, soft-drink makers and electronics industrialists began entering into substantial licensing, branding and endorsement deals with various rappers. The side-marketing and selling of Hip Hop-vetted retail goods measured up to what was estimated, by the mid 1990s, to be a multi-billion-dollar profit phenomenon – one derived from an artistic movement that first gained notoriety 20 years earlier as makeshift, free entertainment for the brilliant, ambitiously prolific and energetic youth of some of America’s most impoverished urban communities.

Here, in the first two decades of the 21st century, Hip Hop’s rapier verbal wit is omnipresent in the rock and roll of our time – social media. The streaming of Hip Hop/R&B (now practically one genre) dominates music sales today.

Nineties rap music stars Diddy, Jay-Z, Dr Dre and Kanye West are Forbes-reported billionaires. Not from the negligible sales of the pre- and post-millennium, but from supreme savvy in trading on their Hip Hop charisma and cool with multinational manufacturing interests. That groups’ well-known securing of investment counselling from Warren Buffet and other celebrated financial wizards hasn’t likely hurt their wallets and investment portfolios either. (As a contextual side note, the prescient rap industry thought-leader Russell Simmons declared he’d made more money in one year from his first small, SoHo-based retail franchise, Phat Farm, than he’d made after 10 years of successfully grinding away in the music business.) Paintings by Basquiat auction for $100 million; those by the Basquiat- and subway-writing- influenced street-art activist Banksy go for $1 million a pop.

The viral aura of subjects and objects that carry the Hip Hop trace couldn’t be any more manifest, seductive and desired in our parallel pandemic – and Black Lives Matter –framed epoch.