A Justin Vulliamy Watch Made for King George III

By Sotheby's
One of the highlights of the upcoming Watches sale in London on 16 April is a gold watch covered in blue enamel and lavishly set with diamonds, which bears the crowned cypher of King George III. It was made by the renowned 18th-century watch and clockmaker Justin Vulliamy.

J ustin Vulliamy was the patriarch of three generations of watch and clockmakers. He left Switzerland and moved to England becoming the partner of Benjamin Gray, whose daughter he married. Following the death of his father-in-law, who was King's Watchmaker to George II, Vulliamy and his family continued to make watches for the Royal household.

The watch in Sotheby's 16 April sale is one of a small number of watches, which bear the crowned cypher of King George III. There are two currently in the British Royal Collection and two more, which sound very similar, were exhibited in a 'Royal Treasures' loan exhibition in 1937. The cypher indicates that the watches were were royal gifts to friends and close personal acquaintances within the Court circle. For example, one of the two now in the Royal Collection is reputed to have been given by the King to the Earl of Courtown.

It is interesting to note that, based on the unique numbers attributed to these watches, it appears that the cases were made early in the reign of George III and the movements were subsequently inserted and resized as required. This was not an uncommon practice with particularly prized cases, and the surviving Vulliamy business papers record several such instances, as well as the reverse process of re-casing earlier movements.

In 1764 Vulliamy took full control of the firm. He never obtained the Royal Warrant as King's Watchmaker, probably because he was not naturalised and so remained ineligible for this Civil List post, but maintained close links with the horologically-minded new king, George III. He received a personal appointment as clockmaker to Queen Charlotte, while his son and partner Benjamin Vulliamy received a warrant as King's Clockmaker in 1772, and was succeeded in this post by his own son Benjamin Lewis Vulliamy, who retained the Royal Warrant under several sovereigns until his death in 1854.

With thanks to Roger Smith for his kind assistance with the detailed research on this watch. For a short account of the Vulliamy family of watch and clockmakers, see his article in the Oxford Dictionary of National Biography. 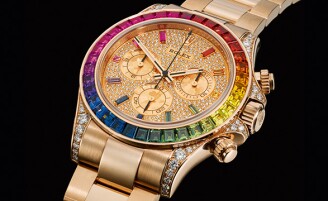