F or his upcoming third solo exhibition in Hong Kong, Spanish artist Joan Cornellà presents more of his unsettling, surreal humor. In a new collaboration with Hong Kong-based creative studio AllRightsReserved, the selling exhibition fills Sotheby’s Gallery with works that exude a deceptively lighthearted gallows humor, which touches upon topics such as life, death, social media, religion and politics with an ironic twist. Sotheby's sat down with the artist to discuss the upcoming event.

At first, Cornellà’s illustration style appears full of cheer, with its visual language evocative of 1950’s style children’s books and palette of bright candy colors. This makes it ever the more shocking when the viewer registers the sinister or gruesome subject matter that is entirely incongruous with the work’s gleeful appearance. It is a simple delivery of a complex effect—in equal parts, amusing and grotesque. 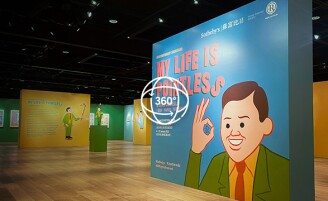 Take Cornellà’s Selfie Gun as an example. This famous work depicts a man who appears to be staring with a blank smile and brandishing a selfie stick. In place of the expected smartphone, what’s mounted at the end of the selfie stick is a handgun aimed at the man’s grinning face. A variation on this is CCTV, which replaces the pistol with a surveillance camera. The bleak commentary on today’s self-obsessed social media culture is not subtle, and yet the actual message, if there is a message, remains ambiguous.

Calling to mind that old saw of explaining a joke, when asked about the meaning of some of his works, Cornellà demurs and says he prefers to have the viewers interpret the work for themselves. “I prefer to have people see the exhibition and see what they say about that.”

Marking the artist’s return to the city after three years, Cornellà’s exhibition My Life Is Pointless is less pointedly focused on culture in this city and takes a more universal view on the human condition. The name of the exhibition invites the question whether the artist himself believes that life itself is entirely absurd and devoid of meaning.

"Behind my work, there’s often some existentialist ideas in the background, and some cynicism too,” Cornellà said. “Some existentialist philosophers talk about having no religion or no god as a starting point, and in that way life doesn’t make sense. But that doesn’t mean that life is necessarily pointless, because you can always find a point that works for you. You can think for yourself about what gives meaning in your life. This is better than just having a purpose or meaning which has been given to you."

For Cornellà, it is this absurdist humor that paradoxically can resolve one’s persistent dread by making light of the senseless cruelties of modern life. Among the artist’s past sources of inspiration is Thomas Bernhard whose poetry and novels dwell heavily on human misery and death. While Cornellà would read the Austrian author’s works, he would find “a dark side in his words that would suddenly become kind of funny.”

“The humor I like is related to the absurd [style] of Samuel Beckett’s literature or Monty Python. You can find many such artists and art forms with the kind of surreal comedy and black humor that offers a way to make things supposedly heavy or dark far easier to digest.”

With nearly eight million followers on social media, Cornellà has attracted a strong following and his satire has certainly resonated with people across the world — from Hong Kong, Tokyo, Seoul and Beijing to London, Paris and New York.

While humor can be a unifying force, it can also be subjective. Black comedy often takes aim at subjects that are often considered off limits. Cornellà suggested that navigating the boundaries is complicated: “We always have boundaries we think should not cross. Before, I used to think any artist should cross those boundaries deliberately in order to question it, because there is a lot of censorship and self-censorship. Now I believe it is more relative, and it is not that simple.”

Given the provocative nature of the artist’s work and given the constant churn of internet ire on social media, Cornellà's form of black humor must have given occasion for outrage.

“I don’t respond to it openly,” Cornellà said. “I could, and it is what social media is supposed to be most of the time — an open conversation. I see how different people get into fights so easily, and you can try to win an argument, but it just becomes an endless thing. Then you are not building anything at all.”

Much has changed in the last three years since Cornellà’s 2017 exhibition in Hong Kong. My Life Is Pointless reprises some of Cornellà’s best known themes with much more added text. It also showcases for the first time his latest work of life-sized panels, shaped panel paintings and bronze sculptures, as well as a selection of limited print works.

“This is the first time I have worked with wooden panels,” the artist said. “I have been working on paper for a long time, and it is good to try different mediums. I have been working with AllRightsReserved for quite a bit and, in that sense, I have been doing collaborative work and that’s new. Working in paper feels more like going back to my roots, more my thing. It feels more personal to work on a smaller scale whereas working on big scale feels almost pretentious sometimes—as if you are doing something everyone should see.”

The exhibition also features Cornellà’s three bronze sculptures. This brought to mind the first time the artist saw Jake and Dinos Chapman’s Exhibit No.69, fully inflated sex dolls that were cast in bronze and painted. “The effect was funny and disturbing because it is bronze but appears inflatable or plastic. For my work, I see it as more plastic, and the bronze makes it contradictory. And then when you paint bronze, it is like: ‘What for?’”

Thought-provoking, honest, and always entertaining, Cornellà’s work is truly sincere in its potent message, even when disguised through blatant humor. In the artist’s own words: “I think we all laugh at misery. We must start from the idea that when we laugh, we laugh at someone or something.” 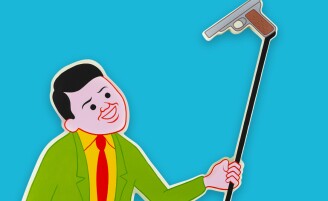