The Glitter of Ancient Gold

F or as long as civilization has existed, humans have adorned themselves. Starting with shells, stones and bones, the love of jewellery evolved with the discovery of rare and precious materials all the way to the engineered diamonds of today. Gold jewellery, in particular, carried heavy significance in Asian civilizations. The meanings different cultures assigned to jewellery have been as varied as the designs they produce and the materials they use. Yet they are unified in the instinct to express beauty, nobility, and divinity.

Sotheby’s Golden Splendour – Gold Jewellery from the Collection of Tuyet Nguyet and Stephen Markbreiter (21-28 July, Hong Kong) presents a weeklong online auction of spectacular pieces hailing from Java, Khmer, Burma, Vietnam, and Tibet. From a collection painstakingly built over more than 40 years by two pioneers of the Asian art world, each piece is not only an exquisite work of art, but also comes with a rich history and purpose.

"Vanity may be a private characteristic, but its outward expression is molded by society. "

Golden objects accentuate the attributes of the wearer, and their designs express a culture’s aesthetic sense. Ancient jewellery in Southeast Asia were worn by both female and male deities, queens and king, and women and men alike. Often body objects designed to accentuate beauty and status may be highly suggestive with meanings associated with fertility, eroticism, and creative power.

The history of Southeast Asia is written in gold of its early kingdoms, reflecting the rise and fall of ancient empires as well as the influences of neighbouring cultures through trade, religion, and conquest. Gold jewellery throughout Southeast Asia was heavily influenced by India and religious concepts from the subcontinent. Along with the spread of Hinduism and Buddhism, India's traditions of adornment would also take root throughout Southeast Asia, eventually evolving into distinctive cultural styles.

Khmer (Angkor). From the 9th to 13th centuries, the Angkor kingdom dominated a large part of mainland Southeast Asia, holding immense wealth and controlling trade with cultures throughout Asia. As the Angkorian or Khmer empire grew more powerful, the jewellery became ever more elaborate. Sculptural depictions at temples show scenes in which warriors, celestial dancers, and nobility wore sumptuous arrangements of gold and jewels. Even Buddha, who had renounced his princely title and worldly possessions, may be depicted in regal attire with sumptuous gold and jewels; the concept of a bejeweled Buddha originated from eastern India during the 9th and 10th centuries, and was adopted by Khmer kings who appreciated the connection between kingship and divine power.

Pre-Angkor. The Pre-Angkorian civilisation, which flourished from the 1st to late 8th centuries, was renowned for their exuberant, intricate jewellery. Excavations have uncovered gold and glass beads, rings, pendants and bracelets with designs unsurpassed in later periods. The Javanese conquered part of the Pre-Angkorian kingdom in the latter half of the 8th century, and their cultural imprint can be seen in the assimilation of Indonesian motifs.

Java. One of the largest islands of Indonesia, Java was situated at the centre of maritime trade networks with India and mainland Southeast Asia, and thus had been the seat of the earliest and most powerful Hindu-Buddhist kingdoms in the archipelago. As royalty and gold were closely linked, ancient Java had a wealth of sacred gold regalia for their nobility. The highest-ranking members of Javanese royalty sported sacred gold pieces for religious ceremonies or special occasions. The pieces were similar to those seen on religious statues. In fact, everything from the placement of crowns, arm-bands, pectorals and belts follow the protocols of statues of adorned gods.

India. Gold jewellery throughout Southeast Asia was heavily influenced by India and religious concepts from the subcontinent. Kings were divinely descended, and like temple gods were decked from head to toe with gold and jewels. They were often depicted as real life gods, like the Hindu protectors of creation Vishnu or the god of destruction and transformation Shiva, while queens were adorned to resemble goddesses, like the mother of all Buddhas Prajnaparamita, Durga, or Shiva’s consort Parvati. Gold became emblematic of divine power and status, so played a central role in religious and social rites.

The beauty and purity of jewellery was also closely linked to divinity, regarded as a way to honour or worship the gods. It is no surprise that such reverence for gold is an age-old practice, held sacred as precious material suitable for the adornment of the body, the temple of the spirit.

John Cary’s 1801 “A New Map of the East India Isles, from the Latest Authorities.”

Gold remains prized today for its enduring quality. Sacred gold pieces such as bracelets, beads and masks were often commissioned to honour ancestors. In some cases pieces made from other materials would be covered in gold fold in order to express this connection between gold and the afterlife. Jewellery was often a part of burial ceremonies or perhaps to promote transcendent communication by conjuring spirits, to honour deities or to invoke ancestors.

The Malayo-Polynesians, whose ancestors settled in the Philippines around 5,000 years ago and eventually spread through Indonesia and Malaysia, were known to make gold masks for those that passed on.

At Giong Lon in southern Vietnam, three gold masks dated to the two centuries between 100 BC and 100 AD, have also been found. These have artistic differences but likely stem from the same traditions. The oldest scientifically elated gold in insular Southeast Asia has been found in Bali, which has no gold but where it was used to bury the dead between 100 BC and 100 AD.

The burial offerings included gold cones, beads of round and discus shapes, leaf-shaped eye and mouth covers and beads of glass and shell. A gold ring was discovered outside a burial ground from that period. The theory is that it may have been imported from India around 1,800 years ago, as finger rings were not common in Southeast Asia.

Much mystery remains about the jewellery of ancient Asia. The purpose of specific pieces may be lost to time, but some of the treasures of those bygone kingdoms are now available at Golden Splendour – Gold Jewellery from the Collection of Tuyet Nguyet and Stephen Markbreiter auction. 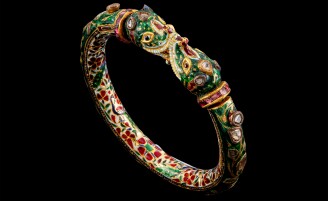